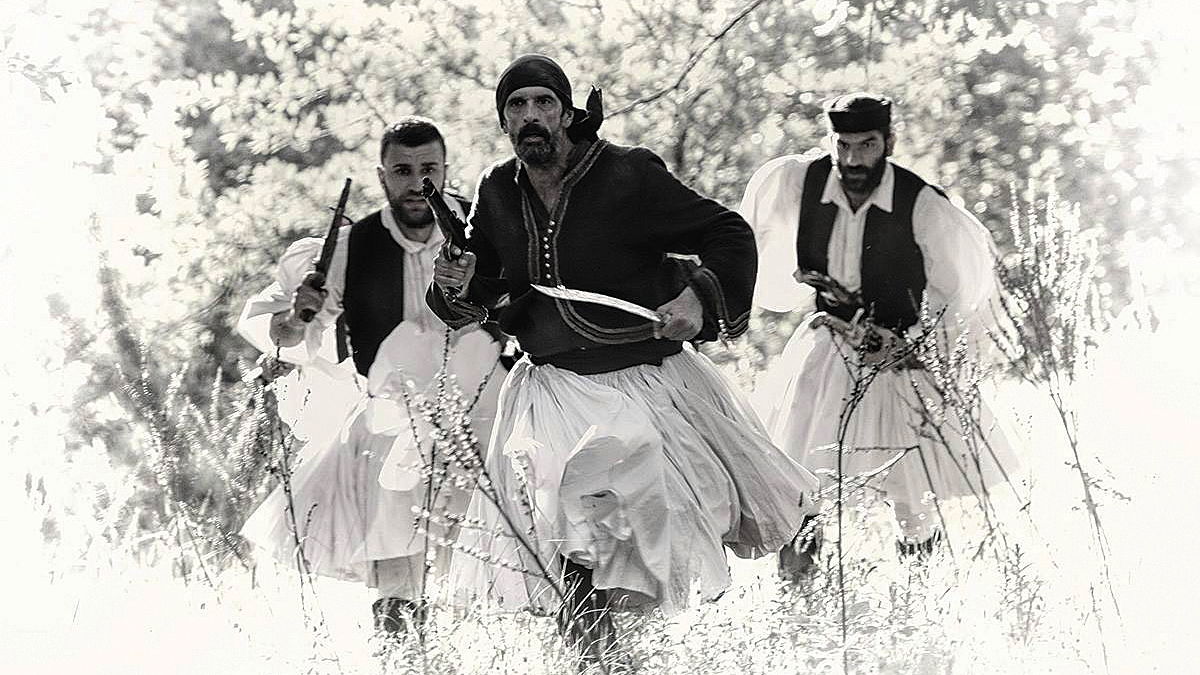 Vassilis Tsikaras, “Culture is our way out of the crisis”

The film “Exodos 1826” is an independent production from Thessaloniki. It recounts the story of the 120 men from Samarina, and surrounding villages, who rushed to help the Exodοs (exit) from Messolonghi in April 1826. The film, based on the Greek folk song “Children of Samarina” and surviving historical facts (and a little bit of fiction), is the first movie in 46 years to be released about the Greek revolution.

“What pleases me the most is that the people who watched the film tell me, ‘I knew the folk song, but I had no idea about the story that lies behind it. Now I know the story’.”
Vassilis Tsikaras

Coming from the theatre, the film’s director, Mr Vassilis Tsikaras, spoke with “POLITISMOS” about this new venture (his first full feature film) as well as the challenges he and his team have faced, and also revealed his team’s next steps. “Exodos 1826” symbolizes in part the power to escape all that binds, ensnares or strangles us in everyday life.

This is the first film about the Greek Revolution of 1821 to appear on the big screen in more than 46 years. What challenges does such a production have?

There are many, and they are concise to the challenges that every motion picture has. The greatest was to find financial support to begin such a film in the first place. This particular film, as a historical piece, was more costly, compared to other films. Our complications were mostly financial.

It was difficult finding the money to start shooting. Two years had passed, with us waiting for answers from public institutions and from individual initiatives. When things seemed to come close to an impasse, suddenly we had an appointment with Mr Manolis Savvides, the president of the History Friends’ Club of Giannitsa, who managed to motivate a whole society and make this film a reality!

He said that we could shoot our film in Giannitsa, though I had intended to shoot the film in Grevena and Samarina, the actual locations. But we decided to go there. Within 20 days everything was ready – we had permission from the Municipality of Pella and private sponsors to support the whole venture.
Our first step was to collect costumes and weapons from various local cultural clubs. We started shooting in April 2016.

Did you use authentic traditional costumes?

Nick Kalaitzides designed some of the pieces (for example, the Turkish costumes). His contribution to the film’s scenography and costume design was crucial. But we also used artifacts from the past, such as authentic weapons and costumes. All this blending that was done led to an unparalleled result, obvious on the big screen.

Your source of inspiration is the folk song “Children of Samarina”. From where did you draw information to “build” the script?

There is an oral tradition, basic information that travels from mouth to mouth. The song is literally a dirge. When the men of Samarina, about 120, fled from Samarina and the surrounding Vlach villages to help the “Exodos” from Messolonghi, most of them never came back.

Only 33 survived. When a woman saw them approaching the village, wounded and dirty, she exclaimed “children of Samarina, poor little children, dirty as you are”. The song’s lyrics, according to our oral tradition, are the “captain’s” (Michos Floros) last words to his men, before he died.

Then, I turned to history books; I read everything that was available, starting with Nikolaos Kasomoulis’ military memorabilia, who wrote about the Exodos. I collected different pieces of information and tried to put them all in my scenario, without altering the historical data. I did use a considerable amount of fiction to help my script become coherent.

What pleases me the most is that people who watched the film tell me “I knew the folk song, but I had no idea about the story that lies behind it. Now I know the story”.

To me this was a bet. To make more people aware of this story – to highlight true historical facts, to highlight new heroes. It is a story that touched me quite a bit. And although my initial goal was to make a documentary about the song, I ended up with a feature film.

There are many renowned professionals among the movie’s contributors.

Dimitris Stabolis, our director of photography, is one of the most experienced professionals in this field, having made numerous movies, documentaries and TV ads. Plus, he is a man with whom it is a pleasure to collaborate.

All our contributors are top in their field – you can see that just by looking at their resumes!

The actors are also very well known – Leonidas Kakouris and Demetres Papadopoulos – and Maria Androutsou in a dramatic role for the very first time. Demetres is very well known in Thessaloniki – after this role everyone will have something good to say about him!

Tell us about the film’s story.

At the same time, we have parallel stories unfolding- the women who wonder where the men have gone, the Turks- Ibrahim Pasha, the Turkish commandant – all wit important roles to the story.

What we have also paid attention to the use of linguistic idioms, for example, Vlach. We hear the Vlach dialect in the movie, Turks speak Turkish, Austrians speak Austrian. This is a detail our actors worked very intensely on.

That’s what cinema is for me – to give a precise representation of an era, how things were then. Even sounds. Every aspect has a role to play. It’s much easier to have everyone speak Greek… the hard part is for the actors playing Turks to speak Turkish, for the Vlachs to speak Vlach etc.

We’re talking about a historical film. Did the Greek state “embrace” such a production?

Most likely, they weren’t touched by the project. Many of us thought they would be interested in a historical film. But we had no support, no luck.

What is the audience’s response so far?

Very good. All of our premieres in Greece were crowded. In Athens, at Alkyonis Cinema, we had more than 330 people. The same thing happened at Colosseum, Thessaloniki- the attendance exceeded our expectations. Wherever the movie has been premiered, in Grevena, in Yannitsa, it has been a success.

In Athens, the attendance keeps going well, despite the fact that we don’t have a budget for promotion – TV spots, and such. The world reads about this movie on the web. Without the power of actual television promotion, it has still gone very well, the average attendance in cinemas is 50-60%. That is very satisfactory, considering we are in a very difficult time for movie launches. During this time of the year, people don’t traditionally go to the movies much. It is also the time of the year that award-winning films are presented…. So, mutatis mutandis, the attendance is pretty good!

What message do you want to send with this film? It is a message of optimism to a Greece that is going through difficult times?

The film hymns love of freedom and love of family. It speaks to love of country. It speaks of the ideals of sacrifice and self-sacrifice. Throughout the film, we often hear the actors say, ”if we don’t mind our children’s future, this country has no future”.

The film’s title “Exodos”, apart from the fact that it is about the exodus from Messolonghi –the movie could equally have the title “Children of Samarina”- aims to express escape from all that binds us, ensnares us, or strangles us. It is a message that there is a way out from all that seems impossible.

Freedom has a cost. We would not be free today if it weren’t for some people who took these risks. Today, we must do things a bit differently, we have to think of our responsibilities, our role in society and how we can make a collective “exit”, leaving our egos behind. This is one of the key messages.

Theater or cinema? What do you love the most?

I love the theater, I have written several plays, I am in charge of a theater, I am a director, I play. However, cinema is the theater’s next step.

You can’t make a movie if you don’t do theater first and you can’t love the movies if you don’t love the theater and acting. Now, right after my first long movie, I am ready for a second one. So I think that I have started to love cinema as much as theater.

I have loved theater, acting and films, since I was a child. I studied journalism and worked as a journalist for years, but eventually, I decided to take a break. A play though, is no less of a journalistic text; it’s like extending a vignette, a humorous story. So I continue being a journalist in a way – through my plays.

Cinema, like theater, is a vehicle that allows you to communicate on a larger scale. However, with cinema and TV, you have more immediate results.

Will you continue doing historical films?

Everyone tells me that if my film were a comedy, things would be better, because I’m a comedy writer. But at this moment, I do need – maybe our society needs it too – to talk and pass on messages through historical films. I want to show, to write, to present issues unknown by the general public. I want to feature new heroes, to showcase glorious moments of Greek history.

Oral tradition and local heroes abound throughout Greece. This won’t be hard…

I am already preparing for a second historical film, after the summer. It will be a blend of history and fiction as well. I believe that in these difficult times, culture is our way out of the crisis. The world should support more and more artists and the artistic efforts made – they are worthy of it. We shouldn’t forget that artists themselves are part of our society; they know the challenges that each of us faces and they are trying to say something, to share some message, through their art.

ABOUT:
Vassilis Tsikaras studied Journalism and took acting classes in Greece and abroad. He has written 10 plays, some of which have won awards. He has directed more than 20 plays and 2 films. He has worked at the Municipal radio of Thessaloniki for 12 years and in various media for 18 years. He is President of the Cultural Association Aratos, head of Aratos theater and Aratos Films.

To learn more about his projects, visit:
www.theatroaratos.com