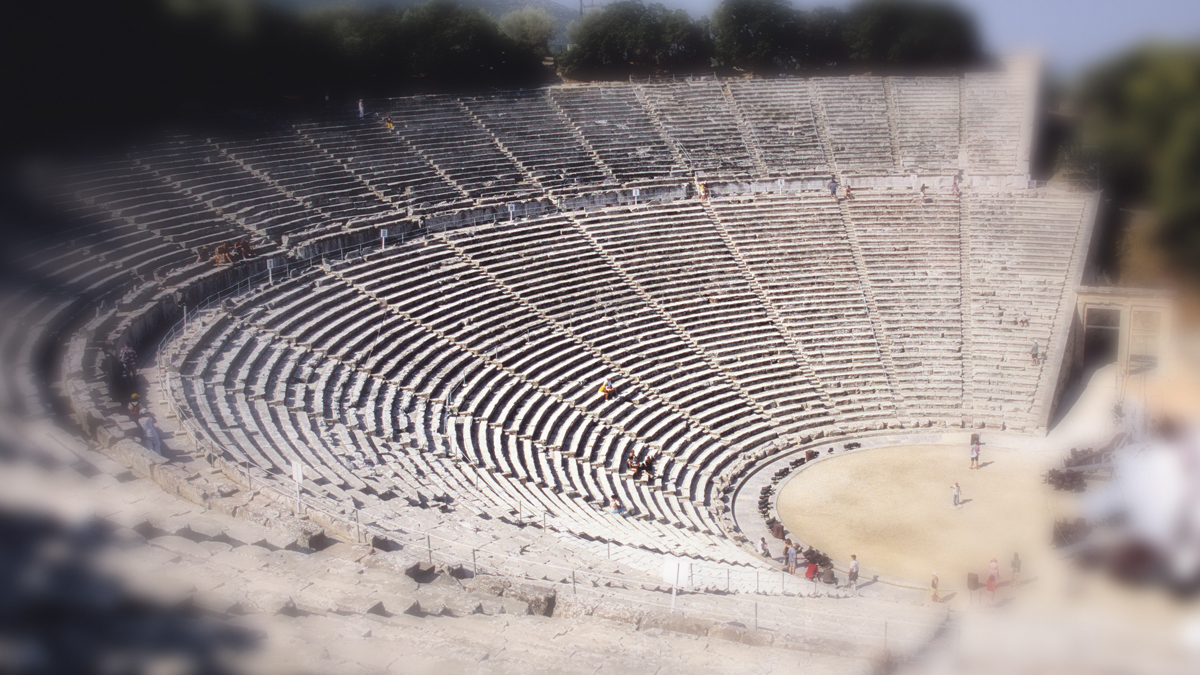 Theatre…To Exist, or to Live?

Ever wondered where the key difference between existing and living lies? In today’s world, people seem to exist in survival mode, programmed to make a living – we seek that “something” that makes us feel alive. The arts, from visual to performing, are always the perfect choice to take us beyond the feeling of mere existence.

Art evokes joy, sorrow, grief, and pride. With art, we can confront and accept the mortality of our journey. Perhaps one of the oldest and most sophisticated forms of art is theatre. Inspired by our dreams, fears, and ambitions, theatre not only entertains, but also often leaves us with a moral lesson. Theatre is without a doubt multidimensional; it is cultural, educational, and definitely substantive.

Theatre arts find their origins in Greece – Athens, to be exact – around the sixth century BCE.. The followers of Dionysus (the god of fertility and wine) held festivals in his honor, which involved dancing and singing stories about his antics. The Dionysians developed the initial form of drama in choral tradition. However, theatre really took form when Thespis, a priest of Dionysus, introduced a dialogue between himself and the chorus. In fact, Thespis is considered to be the first actor and the father of theatre (and hence, the word thespian means actor).

After Thespis’ innovation, Dionysian festivals included drama competitions. With two festivals each year, the winter event presented comedies and the spring, known as the Great Dionysia, presented tragedies. The Great Dionysia was a major festivity. Four playwrights introduced their works (either four plays or a trilogy) to the audience. The prize would go to the playwright who presented the most timeless story with the greatest moral lesson.

Theatre in Ancient Greece was obligatory, not optional. Citizens and women, had to attend. Even prisoners were let out on bail to attend, and the poor were given free admission. This practice, while unheard of today, shows the high regard that was placed on the educational character of the performances and the value of the moral lessons shared. Plays dealt with important social, political, cultural and religious themes. They offered new views and asked thought provoking questions, helping to form the philosophical and moral base of Greek culture.

The four most well known and influential playwrights of Ancient Greece are Aeschylus, Sophocles, Euripides and Aristophanes. Their plays were first performed in the Dionysus arena and later in other cities.

Three types of plays were tragedies, comedies and satyr plays. Satyr (or “satire”) poked fun at real people or events. No matter the type, only three actors, all men and amateurs, presented the play. Given that there were only three male actors who played all the parts, even female, the use of masks was necessary. Masks created the appearance of different characters, as did thick-soled shoes and exaggerated costumes. A chorus consisting of singers and dancers enhanced the story with their comments, questions, and premonitions. Sometimes, they even served as the conscience of the characters.

The word “theatre” meant ‘’to watch,” and people would gather in places called “theatric” to take part in unique cultural events. Looking forward a couple thousand years, modern theatre has carried on this tradition. One thing is certain, in the place where this art was created, Modern Greeks have kept the legacy of their ancestors alive. Theatre in Greece has not only endured, it has evolved and flourished.

There are 300 theatre venues in Greece today. Despite the current financial crisis, this past year, 2015, was one of the most successful with more than 1,000 plays staged, including amateur productions. According to a recent survey (“Sfygmos Politismou” of October 2015 and organized by the American-Hellenic Chamber of Commerce and the International Relations for Culture), regular theatregoers may attend 15-30 performances a year and even see the same show two or three times. The numbers speak for themselves – Greeks love theatre.

The statistics give light to how significant a role theatre plays in the lives of the Greeks. With the recession and the financial austerity, many Greeks have redefined their leisure options. While they may go out less, they spend time more productively. As a matter of fact, compared to the same survey results of 2010, Greeks today choose theatre as their top choice of entertainment (especially amongst the demographic 35-44 year olds with higher education). Moreover, according to the research, about 40% of participants believe that theatre is Greece’s most valuable industry, worthy to attract international attention.

The fact that Greeks have such respect and appreciation for theatre is evident in their responses, and attendance. Interestingly enough, respondents to the survey were not asked why they opted for this kind of entertainment. Though there are no official responses, one can assume a number of reasons. Theatre has been a rich tradition in the country for thousands of years, and Greeks have always held the arts in high esteem. The current political and economic climates are sure to have also lent to the decision. Theatre has provided an escape from everyday problems, a chance to cheer for the happy ending, and even a forum to rise up for the cause. Theatre is a feast for the soul as it reflects all the frail and delicate nuances of society and human psychology.

How is the experience different though from film? Most theatre-goers will tell you that watching a live performance is a totally different experience. Theatre actors commit body and soul as if inviting the audience into their world, onto the stage. The actors become familiar, perhaps because they are three-dimensional – there is no screen, no flicker of film; the audience becomes invested, attached, as people they can reach out and touch suffer, survive, succeed and react.

This desire to engage, explore and understand the psyche is one of the popular reasons why so many young Geeks are choosing to study drama. Today in Greece, there are about 30 registered drama schools, teaching and honing the skills of hundreds of students every year. In addition to fine arts secondary schools, there are a growing number of schools offering drama lessons for children in grades K-12. Chris Economopoulos, a 15-year old who lives in Athens, has been taking lessons for more than five years now.

As a child, Economopoulos was timid, not very confident. “I decided to get involved with theatre because I felt I needed to be exposed to the world. Participating in live performances in front of friends and family, and receiving the much-needed applause helped me put my feet on solid ground and become sure about myself. Theatre has inspired me and offered me the tools to learn who I am and who I aspire to be,” says Economopoulos.

Studies have shown that students who participate in theatre do better in school and also have stronger social skills; to the question if this is true for Economopoulos he shared that “I have always been a good student and performed well in almost any subject. What I have noticed is my improved language skills. If we are asked to improvise, having to converse or present arguments is tricky; you need to use the right words in order to convey your point. It requires sharp attention to what the other person is saying and quick thinking. So, in that perspective, I think I have improved my creative thinking and communication skills.” The saying goes, “theatre gets in your blood” and indeed it has infected Economopoulos. He hopes to pursue a professional career in acting. He is just one of many young Greeks passionate today about the dramatic arts.

The legacy of theatre may have begun in Ancient Greece, but it is now a tradition cherished globally. Theatre feeds the soul. It allows for open and creative expression and exploration. For generations, artists and enthusiasts have turned to the stage, sometimes seeking the answers to life, and sometimes seeking solace from it. And in Greece today, this art founded on their soil continues to thrive in their souls. n