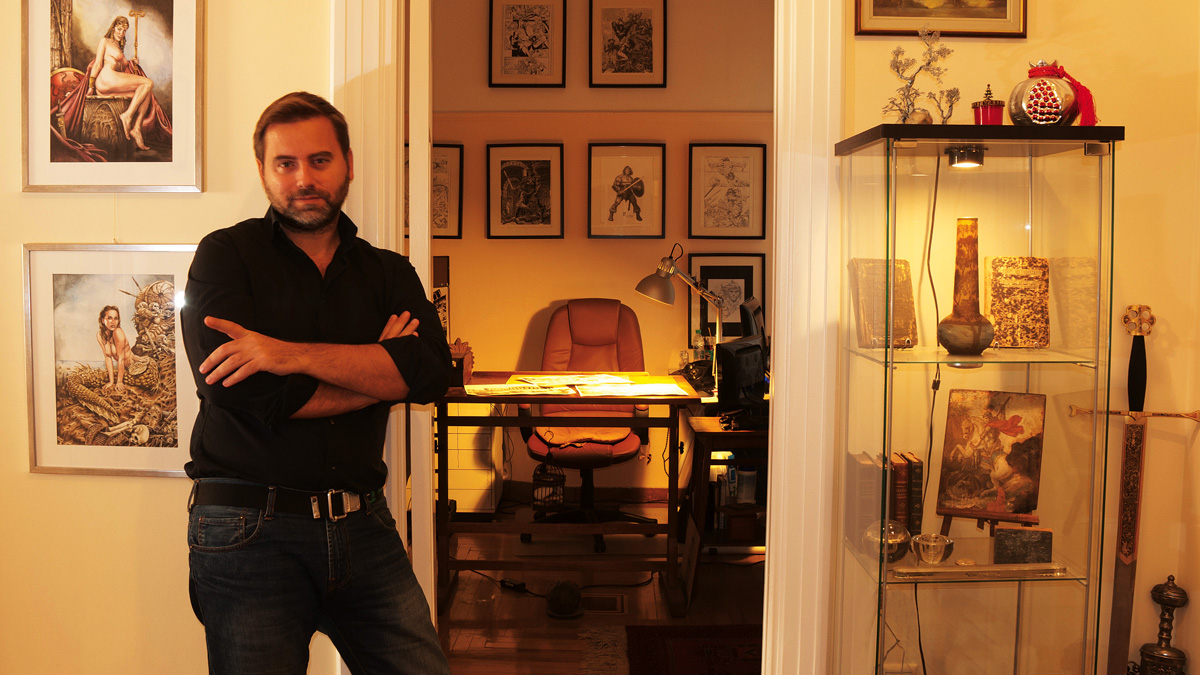 While the artwork of Dimitris Koskinas has been exhibited only in Greece and Italy, art collectors around the world anxiously await the chance to own one of his amazing pieces.

Born and raised in Athens, near the Acropolis, artist Dimitris Koskinas grew up a stone’s throw away from the Parthenon, the Herodium Theater, and the Filopappou hill. These magnificent monuments were of profound influence from which he developed a great affection for Ancient Greek History and Mythology.

In the early 90’s, Koskinas studied graphic design and traditional illustration. He then moved to London to further his studies in Design and Fine Arts. In 1999, the same year he completed his Masters degree, he was featured in a BBC television program for the animated film he had just completed. A year later, he returned to Athens, where he lives and works as an artist to this day. An art collector himself, Koskinas also enjoys reading comics and collecting vintage toys!

How did you get started as an artist?

I won my first art distinction while still in kindergarten. I kept winning art distinctions all my way through high school, and I participated in my first group exhibition at the age of 11. I suppose it was obvious very early on that art would be my future profession. Over the years, I practiced and studied hard in order to reach professional standards of course. Raw talent will get you only halfway. The life of the professional artist demands devotion, study and it is a constant quest for perfection.

Right after my university graduation, my original art style attracted a British book publisher who offered me my first freelance commission. It was the illustration of two books; “The Phantom of the Opera” and “Excalibur”. That was what got me started as a professional artist.

What was the first piece you ever sold?

In 2012 I began working exclusively as a painter, and sold my art via a gallery in Bologna, Italy. A lot of my art went via the gallery, however, I will tell you about the first piece I ever sold directly to a collector.

In the year 2013, I began working on a series of paintings titled “Portraits of Marvel”. This project illustrates the “psyche” of famous Marvel Comics characters, and marries the art of comics and fine art. The first piece I ever sold was the portrait of “Kitty Pryde”, the first painting of that series. It was gone only minutes after completion, which was a very promising sign. The series continues to this day!

Your work is incredibly diverse, from intricate landscapes to amazing comics, and black/white to brilliant color. What’s your process and inspiration? How do you decide theme?

I am inspired by things I love, and driven by instinct. The Ancient and Neoclassical Greece, the female form and comics, are subjects you’ll find in the majority of my art. For an artist it is really healthy to be able to mix up the subjects every once in a while. Jumping from a portrait to a landscape or a nude is very refreshing and allows me to see my work with a fresh pair of eyes.

Choosing to work in black/white or in color has to do with my artistic period and growth. As an illustrator I was trained to paint in color with all mediums. As an artist, years later, I realized that I want to work in black/white. During the seven years of my art training in Athens and in London, I experimented with mediums such as acrylic, tempera, oils, and pencils; in the end however, I found my true love in black ink. One day in a life drawing class I simply started drawing with pen nibs, brushes and black ink and haven’t stopped since. That was when my personal art style emerged; a critical moment for every artist! Over the years my style became more and more elaborate, and I learned to adapt it depending on the project I work on. I work more “freely” when I work on Nudes, and more “strictly” in “The Portraits of Marvel” and “Urban Landscapes” series.

Today, my technique has become quite harsh. It allows no errors, and a single brushstroke can be the reason to start from scratch. There is only one chance to achieve the perfect shade, blend or line when working with a medium that cannot be erased on painted over. In order to make my shades smooth and flawless I apply layer, upon layer, upon layer of thin watered ink, until it looks just right. It is an extremely time consuming technique, thus a single piece takes at least two weeks to complete!

For my nudes, I always work with female models, as I find the feminine form to be more interesting in art. Most of the nudes I create are done in a special ink that has blue and yellow components (it means that there are subtle blue and yellow “whispers” of color in my ink).

The “Portraits of Marvel” series was conceived early in the year 2013. My intention was to approach Marvel Comics characters we know and love since childhood like art. Being an avid fan of comic art for over thirty years, I knew exactly what I wanted to see in my portraits, and the collectors of original comic art responded brilliantly. In 2015, while still working on this series, I visited an exhibition that took place in the National Archaeological Museum of Athens. It was titled: “a dream among splendid ruins…” Strolling Through the Athens of Travelers 17th – 19th Century.

That exhibition inspired me to work on a new project called: “Urban Landscapes of the 1900’s”. In that series I recreate the Athens of old, based on daguerreotypes and early photographs of my city. My main focus is on the monuments of the Classical period, and the majestic Neoclassical buildings built by Ernest Ziller.

Do you have a favorite piece?

I love every piece that I create. Every time I create a new portrait for my Marvel series, I strive to give it life, breath, a glimpse of intelligence in the eyes. Every time I create a new “Urban Landscape” piece I try to recreate the atmosphere of ages past, and I always give context to my scene. I treat all my “children” with the same love and respect before I let them out into the world.

If you could have a conversation with any character in any of your drawings, who would it be, why?

The characters I draw would not make ideal conversation companions. Most of them are either sexy super-heroines or muscular warriors who love a good brawl. If I really had to choose though, I guess I’d go for ale with Conan the Barbarian, who happens to be one of my favorite comic characters.

If you could be a character in any comic, which one would you choose? Why?

The comic characters I am interested in are tormented, fighting for survival, or trying to get through some short of catastrophe. My favorite two characters, Conan by R.E. Howard and Judge Dredd are typical examples of what I describe. Even though I love drawing them and read their stories, I would hate being in their shoes! If I could be a comic character, it’d simply be any character that is invincible and can fly.

Do you find that people are sometimes surprised you are based in Greece with your particular style? Do you feel that Greece’s contemporary artists may be underrated and not as well known as they should be?

I do not feel that in our age an artistic style can be traced to a specific country. Modern art education exposes young people to various stimulate early on, and the internet also plays a huge part in this. My personal ink technique is European in origin of course, as when I was a student I studied and was influenced by the ink works of Leonardo Da Vinci and -my favorite- Giandomenico Tiepolo (1727-1804). But even though I have some Italian influences, so do many well-known artists all around the globe. I can tell with certainty that no one has ever been surprised by the fact that I come from Greece.

The contemporary art scene of Greece is growing constantly nowadays. Perhaps the crisis has a role in this, as arts and crafts are a good way for many Greeks to make a decent living. There are new artists coming out of the woodwork every day, and many have an international career while still living in Greece. I think that contemporary artists are not underrated at all. The internet has eliminated the distance even between continents, and an artist can become known in a country without ever setting foot there.

I am speaking in general terms of course. Myself, I am not a “contemporary” artist aesthetically. As a painter I am influenced by the Italian Masters, the movement of Romanticism and Art Nouveau Masters, Klimt and Mucha.

What’s your next project?

In 2017 you will see more “Portraits of Marvel”, more “Urban Landscapes of the 1900’s” and more nudes, with the occasional Commissioned art in between.

The past year has been quite a busy year regarding commissions, and more and more collectors ask for portraits or nudes featuring their loved ones. I expect the demand for such art to increase this year. n