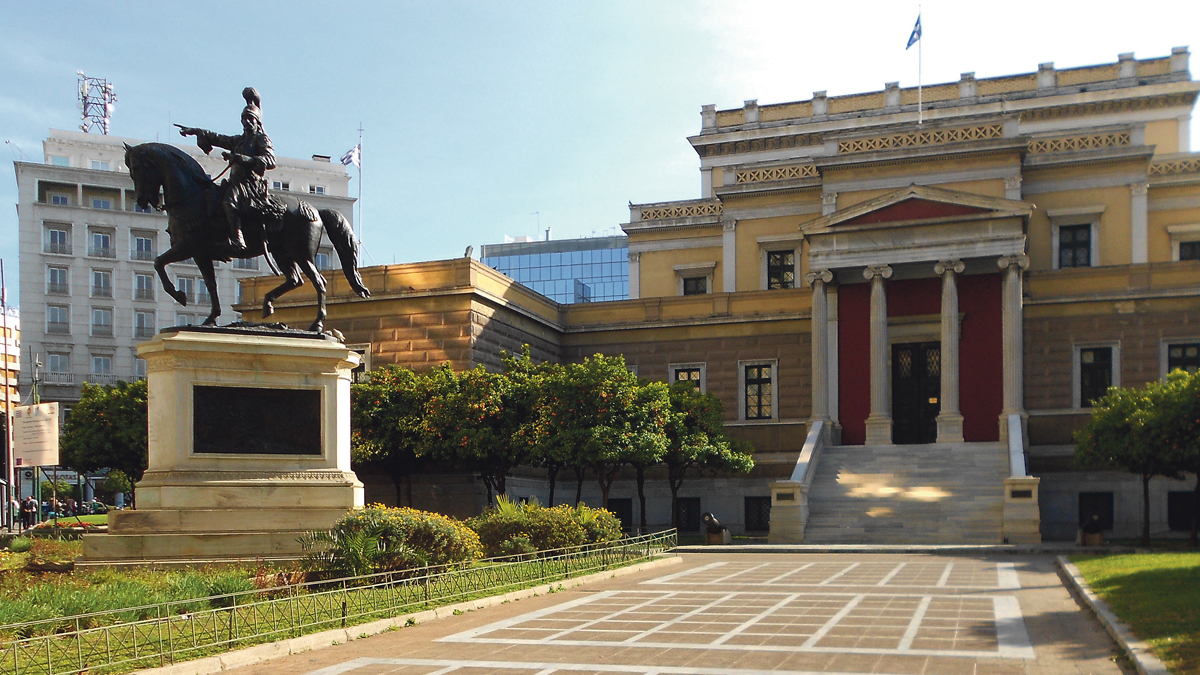 When speaking of Greece, the achievements and remains of antiquity are commonly more familiar to most.  But there is a place in the center of the modern Greek capital where visitors will find themselves before a more tangible history, one that reflects the trials and tribulations of Modern Greece…

When visiting the National Historical Museum in Athens, contemporary visitors will inevitably find themselves entranced with the great statue of Theodoros Kolokotronis. It is only fitting that his likeness should stand guard before this institution. Kolokotronis, a deeply loyal and moral man with a sharp strategic mind, was one of the most important commanders of the Greek War of Independence (against the Ottoman Empire, 1821-1829).

The museum is located in the Old Parliament building in Athens, where the Hellenic Parliament was housed between 1875 and 1935. This was a significant period of struggle against the Ottomans, despite Greece’s declaration of independence decades earlier. Kolokotronis’s statue stands outside the neoclassical building, which was officially transformed in 1960 into the National Historical Museum. Now, this place serves as the repository for one of the most significant pieces of the country’s modern history.

The museum’s collections include a large number of artifacts covering a wide spectrum of Greek history, spanning from the Conquest of Constantinople by the Ottoman Turks (1453) to the Second World War (1939-1945). It is an impressive travel through five hundred years of history. The majority of the collections, however, focus on the Greek War of Independence. Behind every artifact or document, visitors can read about the famous, as well as the lesser-known, characters of the Greek nation. Passing through the rooms and corridors of the museum, visitors can follow the social and political evolution of the modern Greek state.

The power of image in this place definitely serves as a catalyst in connecting historical events with key figures. Portraits and paintings depict lively representations of the struggle for independence. It is thrilling indeed to take in the colorful details of the painting “The Naval Battle of Lepanto,” which depicts the 1571 Turkish defeat close to Lepanto (Nafpaktos in Greek) by the united forces of the Christian West. This was a significant moment because the Ottoman influence in that area of Europe had been eliminated once and for all.

Personal ephemera, arms and armor, jewels and medals, as well as manuscripts and other documents bring the visitor closer to the experiences of the individuals who once owned these objects during such a tumultuous time. One collection which regularly attracts quite a bit of attention is the collection of plaster and bronze death masks. The last facial expression of the deceased captures all the power of the ultimate moment: a sort of mute “conversation” between the living and the dead.

The nine years of the Greek War of Independence come to life again in the museum. The motto “Liberty or Death,” represented on so many flags and documents, reflects the passion of an enslaved nation to fight and die for the sake of freedom. Numerous societies were founded in Europe to support the cause of the Greek Revolution, and many supporters, like the Philhellenes, traveled to Greece to fight under the “Liberty or Death” banner. The emergence of the Enlightenment in Greece was due, in part, to Greek and foreign students who studied in European universities and carried Enlightenment ideas back to Greece. Two centuries after the liberation of Greece, the motto of the Greek rebels remains timely and inspiring, even in the present day.

The National Historical Museum also currently exhibits a rich folk art collection, which includes traditional costumes, domestic equipment, pots, tools, embroideries, and furniture that represents daily life in the 18th and 19th centuries. Studying folk art provides the opportunity to view Greek society as a whole, not only via heroic acts or politics, but also by discovering the everyday habits of the general population.

This is more than a just a history museum; it is a place where education and entertainment come together to create an engaging experience. Visitors, especially students, may also interact with the past through a variety of activities offered by the museum. Upon completing a tour, children have the opportunity to create reproductions of exhibits and artifacts via painting, to watch history documentaries, and to listen to traditional fairy tales, which creates more modern types of connections to visitors in today’s society.

The National Historical Museum is home to a key part of the Modern Greek consciousness. It materializes Greek people’s effort to preserve and redefine their identity. A person, or even a nation, can be self-defined through the past. After all, memory shapes identity.