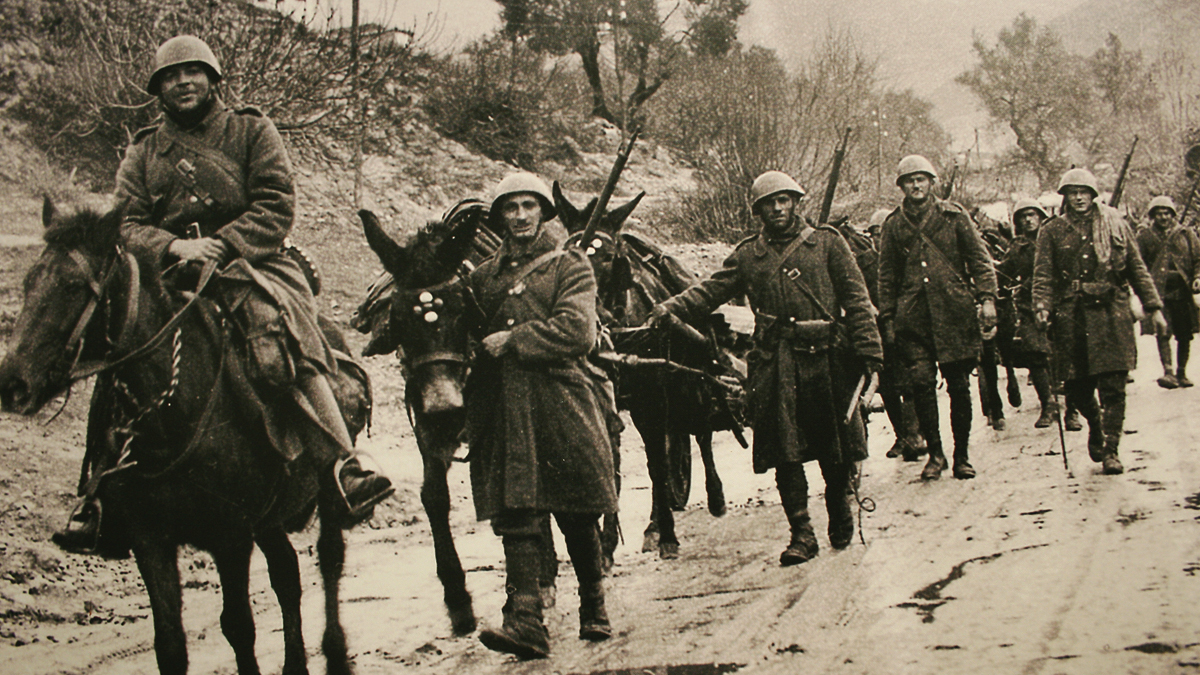 The German invasion of Greece

April 1941. World War II divided Europe into the Axis powers (Germany, Italy, Japan) and the Allies. After the unsuccessful invasion of Fascist Italy in Greece (October 1940-April 1941), the German forces attacked the Greek territory by land and air. Compared to the unprepared and frivolous Italian invasion, the Nazi military machine was more than a considerable enemy. This German operation was part of a wider campaign to occupy the Balkan Peninsula. German dictator Adolf Hitler used this as a defensive strategy before assaulting Russia. However, the renowned German Blitzkrieg (lightning war) came against the furious Greek resistance.

At the time of the Nazi attack, Greek forces had already repelled the first (October 1940) and second (March 1941) Italian invasions. On April 6th, the German army attacked Greece while passing through allied Bulgaria. A second front occurred, larger than the existing one at the Albanian borders from when the Italians had attacked. The Greek army received no help in this attack apart from a small reinforcement of British troops. Despite the heroic resistance of the Greeks, German troops overran the outnumbered and exhausted Greek soldiers in the Bulgarian defensive line, especially because the main Greek army was fighting against the remaining Italian forces in Albania. The Nazi army occupied Thessaloniki on April 9th.

One by one, the mainland cities became occupied. The British Empire (British, New Zealanders, Australians), reinforced by the scattered Greek army, carried on fighting, defending central and western Greece in vain. The British and Greek forces were overwhelmed and forced to surrender after delaying the German advance on the Thermopylae hills. This gave the rest of the Allied soldiers time to retreat and evacuate the mainland by boat. On April 27th, the Nazi army conquered Athens and commenced a victorious parade into the city.

The last act of the drama took place on the island of Crete; an airborne invasion began early in the morning of May 20, 1941. The fierce Cretan resistance, supplemented by allied troops, inflicted serious damage to the German forces and almost negated the Nazi advance. However, tactical failures of the Allies, combined with a well-prepared German counterattack, led to a total collapse of the defensive line. Cretans either surrendered on June 1, 1941 or joined the guerilla resistance. The entire Greek territory had been divided into three zones of occupation under German, Italian, and Bulgarian military control. One of the darkest pages in the modern Greek history had just begun.

Undoubtedly, the Greek resistance “pro aris et focis” (for God and Fatherland) caused massive casualties for the Axis Powers. Hitler blamed the Italians for their inability to invade Greece, which forced him to mount an assault. The German forces lost a great number of troops and equipment along with their army’s invincible reputation. This resulted in the delay of Operation Barbarossa against Russia. Germany lost precious time, which gave the Russians the advantage to prepare a more effective defense on the Eastern front.

Modern Greeks and foreign visitors have the opportunity to follow the story of the Greek Resistance in many museums. War and National Resistance museums, such as the War Museums of Athens, Thessaloniki, and Crete, as well as outdoor Museums, such as Fort Roupel near the Bulgarian border, provide a rich and sufficient number of artifact from this period. Collections comprised of military equipment, uniforms, documents, and paintings, as well as battlefield locations, fortifications, and military construction remains are the vivid proof of that heroic resistance. History comes to life through these objects and places by reminding us that people are ready to fight when freedom is jeopardized.

The “Battle for Greece” confirmed the fact that a small nation is able to ethically prevail against a seemingly-gigantic enemy. This fact obliged Winston Churchill to state, “Hence, we will not say Greeks fight like heroes, but that heroes fight like Greeks.” Even Hitler claimed that the Greeks delayed two or more vital months the German attack against Russia; if we did not have this long delay, the outcome of the war would have been different. This was more than a military conflict; it was a lesson to the world against oppression and tyranny.

Photographs courtesy of the