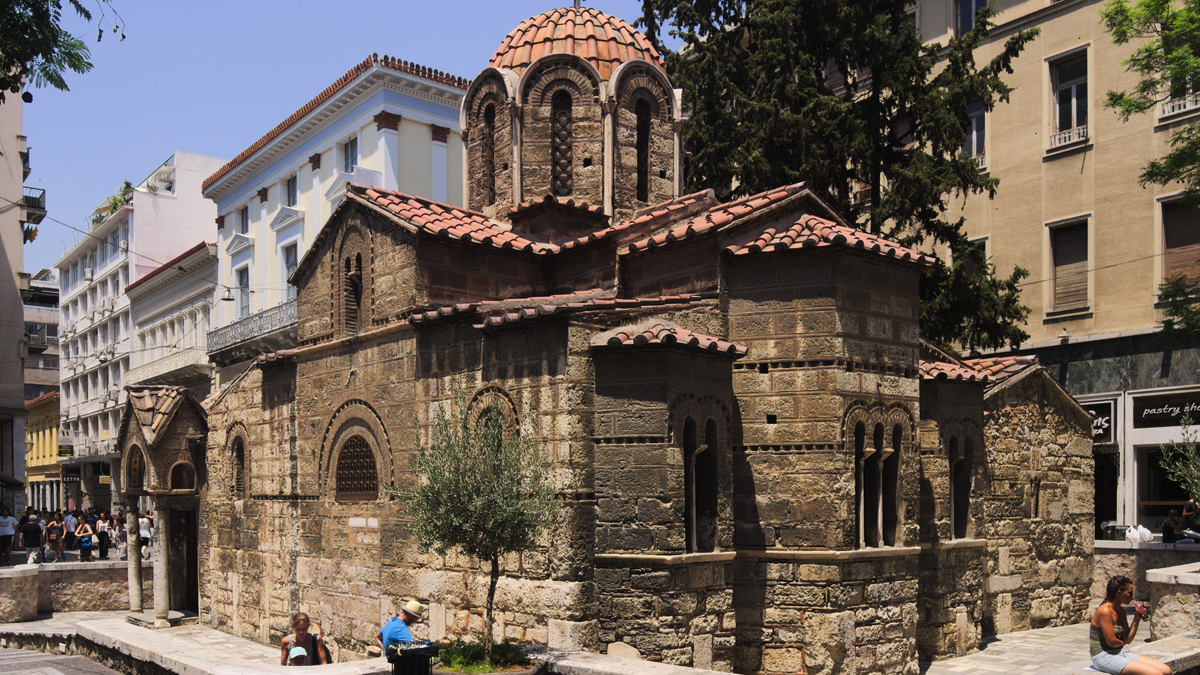 The Byzantine Churches of Athens

Scattered all over the city center, with much of their history yet untold, the Byzantine temples in downtown Athens are invaluable epicenters of grandiose architecture and Christian art.

Dedicated to the Virgin Mary and sitting in one of the busiest commercial streets of downtown Athens, Ermou Street, the cruciform domed church actually belongs to the University of Athens and has supported the needs of the Theological School’s students since 1931. The name of the church allegedly comes from its first owner, either an individual or institution in Byzantine times, who appear to have been “kapnikarides”—meaning they were responsible for collecting an emissions tax (“kapnos” = Greek for smoke/fume), imposed on residential buildings for the chimneys and hearths used for heating and cooking.

Transfiguration (Metamorphosis) of the Savior Church in Plaka

This small temple stands at the foothill of the Acropolis, at the junction of Theorias and Klepsidras streets in historic Plaka. It belongs to the parish of Panagia Chrysokastriotissa but its history is completely unknown. According to researchers, it was constructed in the second half of the 11th century. This conclusion is based mainly on the form of its tall, elegant Athenian dome. It is impossible to accurately determine when the east and westward additions were added, but it is surmised that some of it occurred during the Turkish occupation (probably the western side). The location of the church is connected to the murder of Odysseas Androutsos as it is believed that his executioners secretly buried him in the churchyard in the early morning hours of June 5th, 1825.

Tucked among tall buildings, at the junction of Filellinon and Amalias Streets in bustling downtown Athens, lies one of the most important Byzantine monuments in the city. The church has a long history and it has served both as an Orthodox and a Catholic monastery through the centuries. It was badly battered in 1827, during the Greek revolution, by the cannons of the Turkish forces barricaded in the Acropolis. Thankfully it was renovated between 1850 and 1855 (when its famous bell-tower was also added) and it was ceded to the Russian community of Athens. It includes two chapels, one dedicated to St. Nicholas and one to St. Nicodemus.

In the early 5th century AD the site of Hadrian’s Library was shared between the Sophist-Neoplatonic Philosophers and the Christians, the two prevailing communities of the time. The renovated library wings (formerly destroyed by the Herules) were allocated to the Philosophers, and the court was given to the Christians for the erection of a temple. The tetraconch marble church that was built, became known as the “Megali Panagia” and it is considered the first cathedral ever in the city of Athens. It was later adapted into a basilica in the 12th century. After it was destroyed by fire, a smaller Byzantine church replaced it. Little is documented of the rest of its history although we do know that during the Turkish occupation, several expansions were added. Unfortunately, the temple met the fate of its predecessors: it burnt down in the great fire of 1884, which destroyed much of the Ancient Agora area, and was never reconstructed.

Dedicated to the archangels Gabriel and Michael the Small, this 11th century cruciform temple can be found at the junction of Ermou and Thermopylae streets. Towards the end of the 19th century, some inept attempts to expand the church ended in such unsightly aesthetic additions, that a complete restoration to its former state was deemed necessary. Today the church features its original Athenian dome with marble arches and pillars at the corners and a typical Byzantine brick exterior.

07 Mar 2019, by Athina Pantazatou in Historyx
TAGS: Church of the Holy Trinity (aka the Russian Church or the Virgin Saviouress of Lykodemos), Panagia Kapnikarea, The Cathedral of the Virgin Mary (Megali Panagia of Hadrian’s Library), The Church of Agioi Asomatoi in Thission, Transfiguration (Metamorphosis) of the Savior Church in Plaka