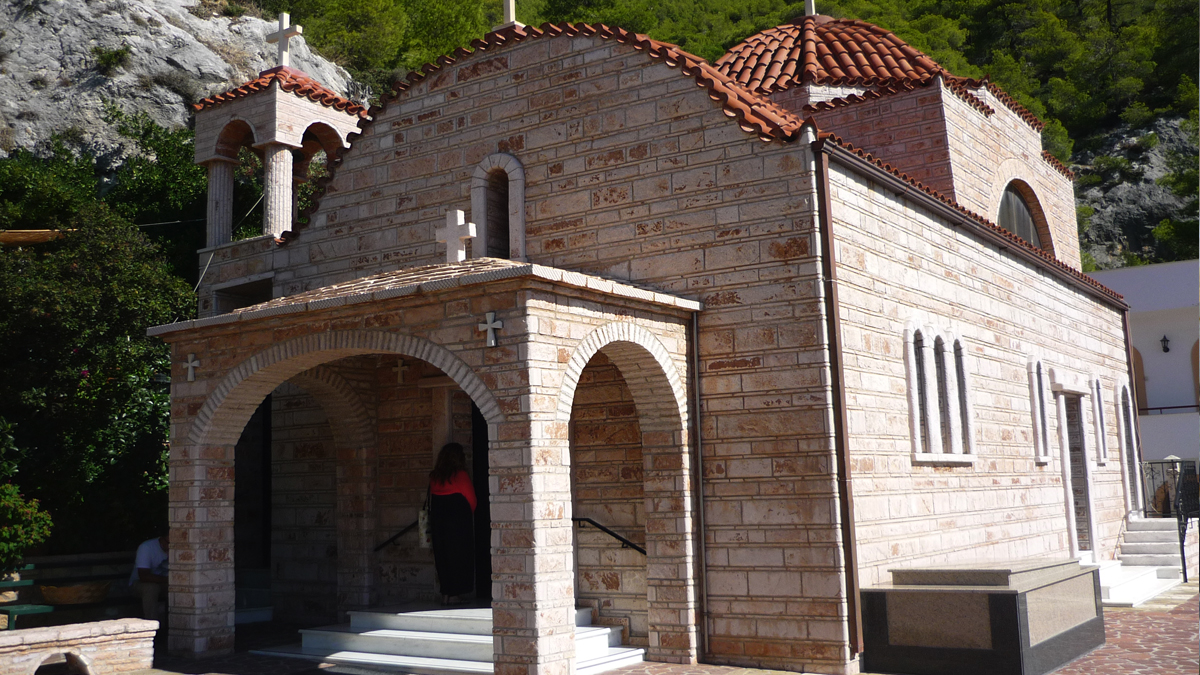 Saint Patapios: A monument of Orthodoxy in Loutraki

In the Geraniai Mountains, above Loutraki, and perched at an altitude of almost 2300 feet, the Holy Monastery of Saint Patapios awaits you. Here you may venerate not only the miraculous relic of the Saint but also wonder at the most amazing panoramic view of the city below.

The monastery is considered a “monument of Orthodoxy”, attracting hundreds of visitors everyday from Greece and all over the world.

After the capture of Constantinople by the Ottomans in 1453, Angelos Notaras, a relative of the then emperor, wished to protect the relic of Saint Patapios from the Turks. Notaras hid the holy remnants in a cave near the city of Thermae (which is today known as Loutraki). There, they would remain for centuries.

In 1904, a priest from Loutraki, Konstantinos Soussanis, would frequently go up the mountain to this same cave and lead a liturgical service therein. Being very tall, he was often challenged performing the service because the roof of the cave was very low. So he asked a craftsman to carve out a bit of the cave for him.

As the craftsman carved away, he found that there was no rock on the west side of the cave, but rather a wall. With great care and awe, he worked his way through the wall to reveal the “holy and fragrant” sacred relics of the Saint.

In 1952, the community decided to build a monastery upon the site where the relics were found. Built next to the cave was the church of the Assumption of the Virgin Mary. The holy relics are kept in a special wooden structure at the back of the cave, in the same place where Notaras had placed them for safe keeping more than five centuries earlier!

Saint Patapios, known as the protector of cancer patients, is according to testimonies, one of the most miraculous saints of Greek Orthodox Church. The monastery’s nuns know of and can recite hundreds of miracles by the blessed Saint.

The feast day of Saint Patapios is commemorated on December 8th and also on Easter Tuesday, as a remembrance of his relics’ finding.

The monastery is less than nine (9) miles from Loutraki and and 50 miles from Athens. The monastery is traditionally open from 9 am to 1pm, be sure to dress appropriately (men, no shorts, women should wear skirts and have arms covered). To ensure that the Monastery is open, you may call +3027440-22496.