Politismos eMagazine | Once upon the Lemon Tree, an interview with George Makris
7801
post-template-default,single,single-post,postid-7801,single-format-standard,ajax_updown_fade,page_not_loaded,,large,shadow2 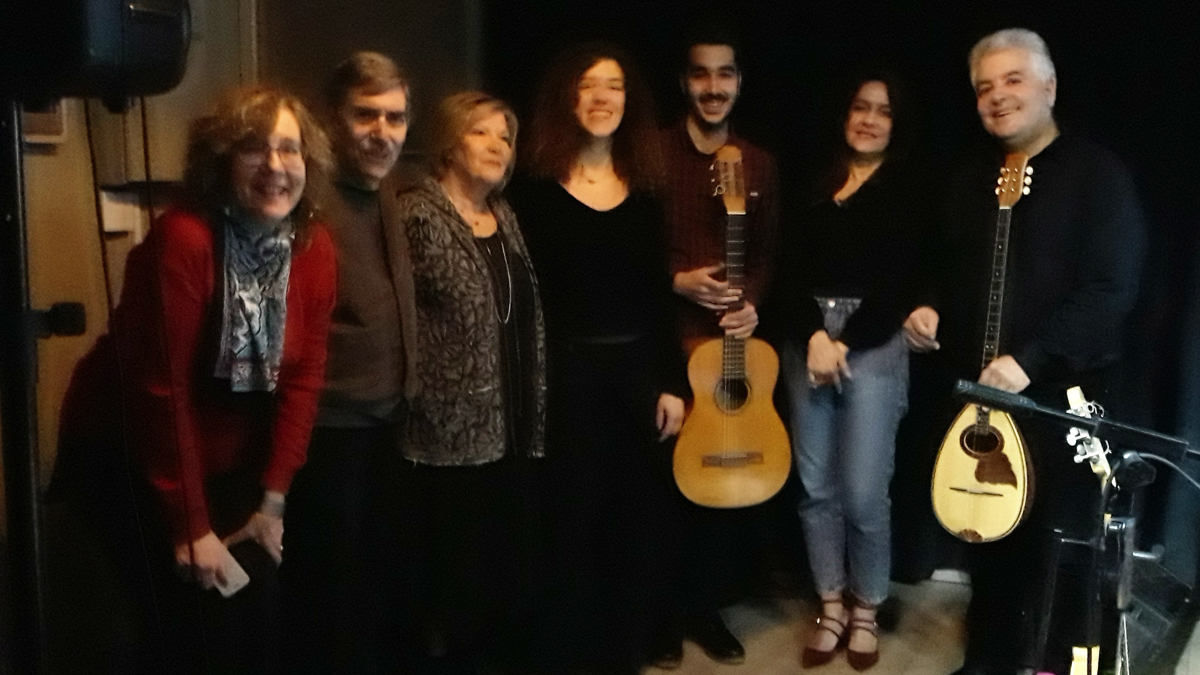 Once upon the Lemon Tree, an interview with George Makris

Born in 1948 in Lesvos, George Makris graduated from “Pantion” University and also has a master degree (Politics) from NYU/NY and a PhD from Aristotelian University of Thessalonica (1996 in Social Demography).

He worked 30 years in the National Statistical Service and General Secretariat for Youth of Greece. From 1967-1974, George connected with musicians of the “new wave” trend. From 1997 to 2006 was a student of ecclesiastical music and a member of the choir “Protopsalton and Lambadarion”.

In 2001, he established the rebetiko music group “Parapetamenoi”(neglected ones), and a new musical journey of storytelling began.

Tell us about your new project “Kapote sta Lemonadika”?

“Once upon at Lemonadika” is a music-theatrical play. It’s my fourth play and in my stories, I include some basic elements as the rebetiko music, the social-political environment of the described period of the play and of course the influence of love.

The story takes place in 1936 at the area of Piraeus called «Lemonadika» during the dictatorship of Ioannis Metaxas. At this area the Greek refugees of the Asia Minor catastrophe of 1922 had built temporary houses with cheap elements and established miserable small businesses (taverns, coffee shops etc.). The trade of fruit and vegetables from the surrounding islands was taking place in the same area.

The play “Once upon at Lemonadika” is a story of poor people with simple ambitions only for life … and survival. At the same time, the rebetiko song, a coherent element of the play, relieves the weight of the hero’s soul from the daily massacre of life.

A “simple” story that hides inexpressible and dark secrets that force us to lower our eyes looking desperately at the mother earth. It hides secrets in the hearts of our parents and in the files of the “keepers” who transform us into remnants of our history who never know when they will get sick.

…. And suddenly love emerges. The dominant force that drives life and beautifies it putting colors and happiness on people’s life as long as it lasts.

The new theatrical play will be performed on the stage of “dieleusis” multicultural Center www.dieleusis.gr

What drew you to rebetika? What is the message you try to share about what this music is, and how it plays a role in Greek history, as well as musical history?

Rebetiko with its social content, is for Greece that blues for America, Fantos for Portugal, tango for Argentina, flamenco for Spain etc.

It’s a kind of song based on authentic inspiration. Song for chased, and unjust people, songs about love, migration, unemployment etc. It has no specific form that characterizes it. But it has remarkable sensitivity and unity, which is, I suppose, its great musicological interest.

Rebetiko has a major impact on the history of Greek song, being the connecting link of Greek folk music of the 19th and 20th centuries.

Rebetiko was not born suddenly from nothing. Its creation and evolution have been influenced by a number of social factors:

It is an integral part of our national music influenced by the orthodox Ecclesiastical music, the Eastern scales (maqam), the western music, as it used to be played in the major urban centers of Greece, with a particular emphasis on Constantinople and Izmir and of course by the Greek music tradition. A race where each player added his own style to the field.

Its dissemination was done by the listeners (from mouth to ear), but also by discography later. The first recordings were made in Izmir and Constantinople in the late 19th century and America in the early 20th century.

Rebetiko at the beginning was partly a product of marginal people. However, “the marginal people” is a part of the big picture of the whole society and has strongly influenced the formation and the course of the modern Greek music.

The authoritarian ruling of the governments of those times, combined with the conditions of life (endless poverty 1.500.000 refugees from the Asia Minor region), the Greek industrial development etc., created the fertile and suitable subsoil on which the disadvantaged social segments expressed themselves and procured rebetiko with raw material of its existence.

Rebetiko song has always been the song of “social protest” and was never “politically motivated”. Its deep and consistent Greek language expressed all the heterogeneous material in a new aesthetic sound having at the same time as recipient and vehicle the Hellenism around the world.

You have a gift for storytelling, and picking the right music to go with scenes. What comes first? A story to tell and then songs that go with it, or songs of an era and build a story that works with them?

Thank you very much for your kind words. I would like to tell you that in our group “parapetamenoi” there is a climate that helps us to increase our abilities without antagonism. Personally, if I like a kind of music or song, wherever it comes from, if this kind of music finds a shelter in a warm spot in my heart the only thing which is important for me is the positive motivation of my feelings. Names of composers, singers, countries etc. are typical things. The most important thing is to feel the content of the song, that makes me unique and familiar with many others. After this automatic process, the choose of the historical points which will dress the environment of the chosen rebetiko songs seems to be an easy job for me. But I feel more comfortable with the final approval of our music group “parapetamenoi”.

This year, you will host your 12th annual Rebetiko Seminar in Skyros. Will you share a little about how it started, who may attend, who teaches, and what the goal is?

This year we will host the 12th International annual rebetiko seminar-meeting in Skyros July 19-26, 2020. We are happy because an idea we had me and Photini 12 years ago has been realized and enjoys love and participation of people.

Responsible for the music all these years is the friend Spyros Goumas who is an excellent and experienced musician of the three-stringed bouzouki and guitar. Responsible for the organization are Photini Karababa and me with the help of the music band members and some loyal friends who share the same passion of our effort. Spyros teaches bouzouki, tzoura and the use of folk guitar and baglama with the help of the guitarist Dimitris Goumas www.rebetikoseminar.com

We are not alone in our try we have help from the “Faltaits Ethnological and Folklore Museum” www.faltaits.gr, “the local municipality” and especially the islanders who are the living support cell of our effort.

In the seminar-meeting, anyone who has a relative ability to play bouzouki or guitar, whether professional or amateur, whether or not reads music is eligible to attend it providing us with a completed participation form after the annual announcement. We accept up to 20 participants in total.

Besides the regular seminar program, we have parallel events for friends and the families of the participants as introductory meeting, nights with rebetiko in tavern of the island, lectures focused on rebetiko issues and the events peaked with a concert at the Faltaits theater. Skyros is also a quiet, cheap and majestic destination for summer vacation.

The involvement of young people is important and proves that rebetiko is a basic way of expressing the young people emotions and feelings. The coexistence for a week of people with different ethnicities, cultures, ages and knowledge with a single common element their love for rebetiko proves that it is alive, powerful and teaches us all the unique power of music when people communicate.

I would like to tell you that we are not one-sided musicians, “closed” to other genres of music, and indifferent to any changes. However, through our actions we want to highlight, as far as possible, the first versions of their creators, so that the creator’s “ethos” and “style” can be traced back from the participants of the seminar and on the other hand, through our common and companion musical moments, to live together, the mood of the old and friendly music nights of the first performances, before taking the path of discography.

I have to mention that Skyros International Seminar-meeting is one of the UNESCO’s reference centers for the recognition of rebetiko in the catalogs of intangible cultural heritage.

“Who” is Parapetamenoi? How did you come together, and what is your mission?

The music group “parapetamenoi” (neglected ones) has been working on preserving and spreading the rebetiko song since its founding in 1999 www.parapetamenoi.gr Twenty years now we have been striving to play with love the original version of rebetiko songs with our means and of course to study the social-political conditions that fueled its development. It’s important to us to preserve and transmit to the youngest, as far as possible, the “morality” and “style” of the youth of that time who inherited us this music treasure.

Our permanent collaboration the last 11 years with the great musician and teacher Spyros Goumas has further strengthened us and today altogether we are developing new actions to better and more directly capture the history of rebetiko song organizing for instance:

If you could spend an evening with any Rebetis (living or deceased), who would it be and why?

I would choose Markos Vamvakaris (1905-1972) without wanting to reduce the offer of many others.
For me, Markos has a symbolism of a spiritual father who left a deep imprint – not only on the music of Greece- but also with the creation of a personal “style” and “ethos” beyond his songs on his personal attitude of his life.

Marko’s autobiographical songs with their simple words and style, his gritty voice and the variety of their musical scales described in simple but clear and profound terms social and emotional situations expressing, according to my opinion, the social protest of his time perfectly, which was and is always present.

Markos looks like a huge tree with solid roots that spread around it and helped to grow other large musical branches. In other words, Markos is the “core” of the rebetiko song.

What projects are on your desk for the new year?

For the new period our team we’ll be focused on three main subjects:
To promote our new theatrical play “Once upon at Lemonadika”. It’s very important for us to show unknown parts of the recent Greek history. For this reason, we use rebetiko as vehicle to connect musically the puzzle of our story.

To organize and promote the 12th International rebetiko seminar-meeting in Skyros island (19-26 July, 2020) following the previous good experience based on our love and passion on rebetiko.

To promote rebetiko besides the Greek audience, to the abroad. We would like to stress on musical and cultural values based on first recordings of the rebetiko discography that initially spread among the urban lower and working-class populations in the early twentieth century. Is very important to us to show the “morality” and the “style” of the first recordings.

I would mention that this period “parapetamenoi” consisted by the following excellent musicians and friends who help actively our effort: