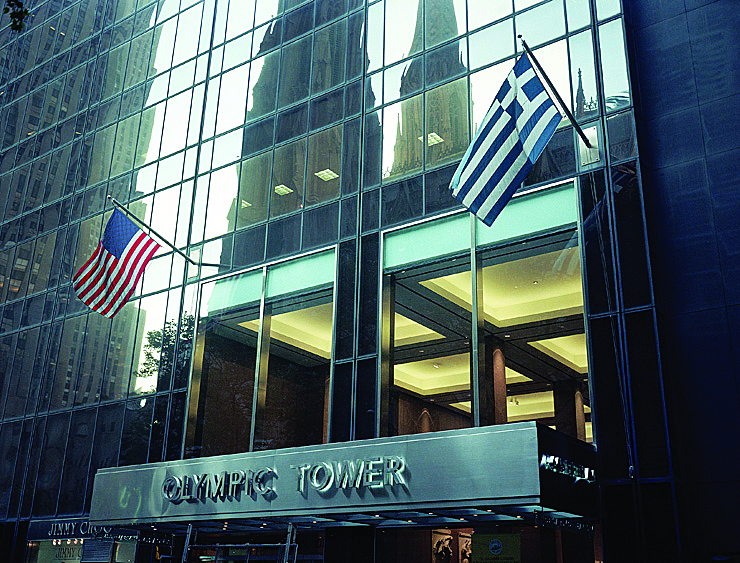 The first of the big projects envisioned and brought to completion by the Onassis Foundation Board of Directors was the OCSC; completed in 1992. It is a model, ultra-modern hospital, whose cost at the time amounted to more than $75,000,000 (estimated at €150,000,000 in today’s prices).

The 127-bed capacity hospital is designed in accordance with the modern architectural principles and technical specifications applicable to all large hospitals.

By the end of 2015 the hospital had admitted more than 350,000 patients and about 1,500,000 outpatient consultations and diagnostic tests had been logged. The social security system benefits, from the difference in hospitalization costs in Greece and abroad, not including post-surgical appointments and overnight stays costs, exceed $640,000,000 (2014 figure).

The Onassis Cultural Centre (or in Greek “Stegi”, which means “roof”) hosts events and activities across the whole spectrum of the arts from theatre, dance, music, cinema and the visual arts to the written word, with an emphasis on contemporary cultural expression, on supporting Greek artists, on cultivating international collaborations and on educating children and people of all ages through life-long learning.  The Centre was built on a privately owned 3,000 sq. meter plot on Syngrou Avenue.

Key OCC facts & figures (from the opening of the OCC in 2010 through today):

Approximately 8,852 artists, partners and technicians involved in projects, of whom 6,200 are Greeks or based in Greece

More than 500 productions and projects (with entrance fee)

More than 380 productions and projects (with free entrance)

The Foundation offers financial assistance to universities with Greek chairs, departments or programs in Europe, the United States, Canada, South America, Africa, Australia and Asia, where Greek studies are taught.

It also supports primary and secondary schools in Europe and the United States that teach the ancient and Modern Greek language and culture.

The Foundation has supported 118 educational institutions in 45 countries.

Through the Scholarships Programs for Hellenes, established in 1978, 5,708 scholarships and research fellowships have been granted for post-graduate and doctorate studies and/or research in Universities, Colleges and Research Centers all over the world, in dozens of different scientific and cultural fields.

The total expenditure of the Scholarships Programs for Hellenes amounts to almost 84 million US dollars.

Since 1995, the Onassis Foundation runs an annual program of grants and scholarships for research, study and artistic endeavor within Greece. The Program aims at promoting Greek language, history and culture abroad, thereby creating and encouraging ties of friendship and cooperation between members of the foreign academic community and their Greek counterparts.

The number of scholarships awarded by the Foundation to foreigners varies from year to year. On average, 35 scholarships are awarded annually. During the 20 years of the Program’s operation (1995 – 2015), 823 research grants and educational scholarships have been awarded, amounting to a total of $10,850,000, approximately.

The Onassis Foundation has established a long tradition of granting educational material and technological equipment to hundreds of public Greek schools all over Greece, especially in underprivileged areas.   Also, since 1998, the Foundation supports special schools and special educational support classes incorporated into general school units, by providing educational and instructional material to facilitate special needs pedagogues with their teaching process.

Among other important initiatives, the Onassis Foundation has supported Special Education, by granting scholarships for post graduate and doctoral studies, aiming at updating and enhancing the knowledge background of the educators, forming an efficient and well-prepared network of teachers who contribute to an advanced level of Special Education services.

The affiliated Alexander S. Onassis Public Benefit Foundation in the USA, based in the Olympic Tower on Fifth Avenue in the heart of New York, was inaugurated in October 2000.

The mission of the affiliated Foundation is to promote Greek culture in the United States and to cultivate cultural bilateral relations. In the present context of international interaction and globalization, the Foundation draws attention to the importance of the Greek spirit and its significant contribution to contemporary civilization.

The Onassis Cultural Center NY promotes Hellenic culture, from antiquity to today, through a rich and diverse program of exhibitions, events and online engagement. The newly renovated creative space in midtown Manhattan, presents a season of events where audiences can engage with art, ideas and culture. Designed to be inspiring and entertaining the programs stimulate interaction between audiences and artists and thinkers in all cultural fields from visual and performing arts to the humanities.