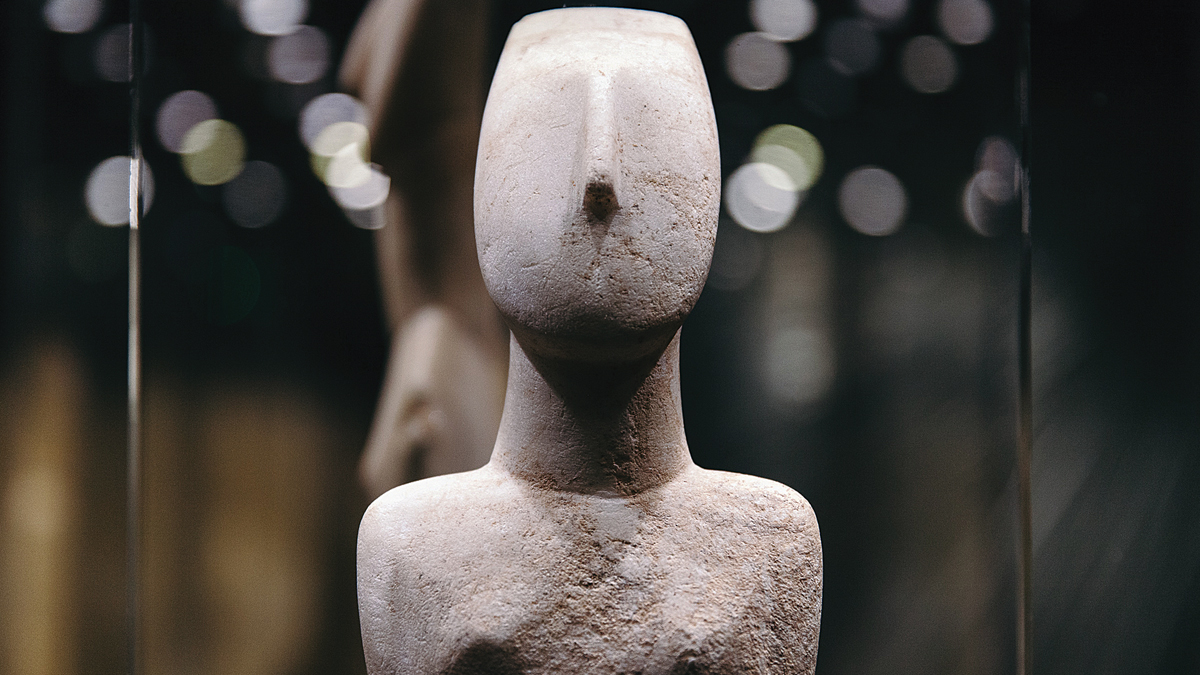 The Museum of Cycladic Art Subsistence, Rituals and Cults in “Cycladic Society 5,000 Years Ago”

Cycladic civilization flourished on the islands of the central Aegean during the Early Bronze Age (3,200-2,000 BC).   The Museum of Cycladic Art maintains one of the largest and most complete collections of Cycladic antiquities in the world!

The Museum of Cycladic Art (MCA) holds representative samples of marble figurines and vases, bronze weapons and tools, leaden figurines and silver vessels, pottery from all the phases of the Early Cycladic period and symbolic objects decorated with incised motifs reminiscent of the sea, the stars, and female fertility. But what do all these items actually convey?

Ever wondered what was Cycladic flora and fauna like 5,000 years ago? Or what were the nuclei of Cycladic society? These are the questions an exhibition called “Cycladic Society 5,000 Years Ago” attempts to answer. The exhibition opened in December, 2016 to celebrate the MCA’s 30th anniversary and will run until March, 2017. Visitors will also learn about islander existence, their forms of entertainment, the role of music/dance/ritual, and so much more through this fascinating exhibit.

Artifacts include 191 items of the MCA’s own collection, 98 items from the Cycladic Regional Department of the General Directorate of Antiquities and Cultural Heritage (with artifacts from the Museums of Naxos, Apeiranthos, Syros, and Paros), as well as several items from the National Archaeological Museum and the Museum of Paul and Alexandra Kanellopoulos, in Athens.

Divided into five sections, the first explains the social nuclei of the Early Cycladic period. It features figurines of men and women and fragments of larger pieces associated with fertility, reproduction and family relationships (e.g. female figurines in pregnancy, and in postpartum, inferred by visible incisions in the abdomen area, images 5-6).

In the next section, visitors gain insight into the occupations, arts and crafts of the islanders. Agricultural activities are prominent, represented by bird figurines, zoomorphic flasks, and several hunting and fishing depictions. Brass hooks, vessels with oil traces and clay pots with leaf imprints on their base, all confirm the practices of farming, hunting, fishing and land cultivation to cover daily subsistence needs. There’s also a wide range of the equipment that craftsmen had had at their disposal: blades, serrated stone tools, bronze axes, knives, saws and chisels, paint pots. Loom weights, vases with matting imprints on their base, and an array of tools associated to weaving, basketry, pottery, sculpture, and shipbuilding! (image 2)

Cycladic figurines, the distinct symbols of the Cycladic civilization, hold their own special subsection (images 3-4). With their simple shapes and clean outlines, they became popular through their association with abstract art by 20th-century artists like Modigliani, Brancusi, Matisse, and Picasso. One of the most important objects is a female figurine of the Early Cycladic II period, with a height of 4.6 feet (making it the second largest in the world).

Next is the exploration of social life, gatherings and ceremonies. This section features marble figurines of musicians, some quite famous like the “Harpist” and the “Piper” (image 1). A cluster of seated statuettes of female figures, fragments from a complex of embraced forms and a plaque depicting a dance performance, constitute evidence of the importance of music, drink and dance in the Cycladic society.

The fourth section features objects that can give us information on the social stratification in Cycladic society. Social hierarchy is documented by power emblems (like crowns) and other insignia of a high social class (like bronze plated daggers and seals from Naxos), silver headbands and jewelry, marble statuettes of warriors or hunters and their partners.

As the visitor approaches the finale, the mysterious “frying pans” are featured. These clay vessels have low vertical or slightly flaring walls and forked or quadrilateral handles, while their surfaces usually bear decorations of concentric circles, simple or running spirals, star motifs or even rowboats. It has not been possible to determine either their use or the precise meaning of their decorations. If they were used in burial rites, themes like the sun and the sea may reflect beliefs for the afterlife. The shape of some of the handles (large triangles similar to the pudenda of female figurines) also suggests some kind of association between natural elements and female fertility.

The exhibition “Memories and Monuments of the Aegean” (also running until March, 2017) by renowned photographer Robert McCabe, is considered complimentary to “Cycladic Society 5000 years ago” and focuses on the Greek Sea and its critical role in human societies, in the Aegean, over the centuries.