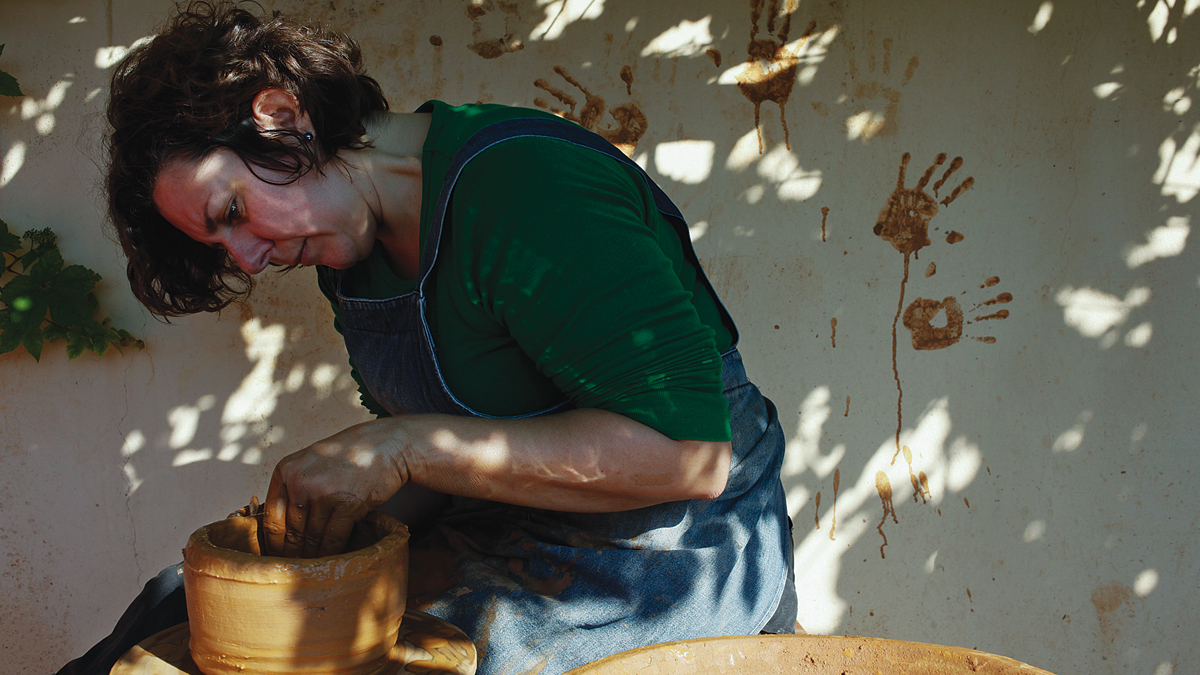 Food, History, Pots and People How Minoan Tastes has become more than just a history project…

In 2016, Politismos Museum featured three cultural exhibits (with still one series to come in 2017!). Minoan Tastes, founded by Jerolyn E. Morrison, curated the exhibits and is a social enterprise that promotes the culinary history of ancient Crete by working with a network of food experts, historians, and archaeologists. It was developed out of the desire to present scientific knowledge in a more tangible way for modern people so that they can better understand how the ancients performed daily activities.

Jerolyn E. Morrison is a potter and anthropologist with a PhD in archaeology. She has worked on Crete since 1997. We had the opportunity to chat with Jerolyn about the phenomenon which is Minoan Tastes…

How did the Minoan Tastes project come about?

The Minoan Tastes project grew out of my PhD work. In late 2011 and early 2012, my friends (who are also archaeologists, conservators and cooks) and I organized a winter Minoan-style party at a local meze/raki place. I wanted to give a “Thank you!” to those that helped me so much during my studies. It was a hit! We cooked and ate the entire day and late into the evening. People even started bringing their own foods for cooking! The local internet news channels and radio shows loved it! In the spring our team became better organized and we started creating the program using a more professional platform. Since 2012, the team members and focus as grown and changed, but we continue to use food and cooking as a vehicle for teaching.

What has been the most rewarding aspect of the project?

This is a tough question because there are many rewarding aspects of the Minoan Tastes program. I believe seeing the pots and tasting the food allows people to in get in touch with their memories and imagination. I enjoy seeing people stand at the cooking hearth and stare at the pots. They are so curious as to what is inside! The stories they share about their parents or grandparents cooking in their ceramic pots are beautiful. There is a nice continuity that I find comforting. Another rewarding aspect of the program is the reaction of foreign people when they see the pots and taste the food, the sight, smells, and tastes unlocks them to share their experiences and dreams about Crete.

What are some of the places you have had the opportunity to host one of your events?

We have been very fortunate to be so welcomed! Each year we have been invited to participate in public events that are hosted by local clubs, elementary and high school in the Ierapetra area, festivals organized Chef clubs in Khania and Heraklio, a few resorts in the Elounda area, and in learning institutions such as the American School of Classical Studies in Athens and the American Farm School in Thessaloniki.

How do you split your time between work, research, events?

Very carefully! It is round-the-clock job with no vacation days. The work requires 100% dedication and I love it, or it could not be done. Of course there are many phases and faces of the actual cooking work and research that add to my inspiration. My work with Stella is a good example of this. Taking the work and the meaning of the project and placing it into a different format to give it a new face; a new breath.

If you could host a Minoan Tastes event anywhere in the world (where you haven’t been yet….), where would it be?

This is a tricky question! In Crete, I would love to do an event in one of the caves. That would be super cool! Any place in the world, probably in Asia. Maybe India, or the islands of Indonesia or the Philippines, possibly Japan? The idea would be to explore how to rely this type of information to eastern island communities to better understand how non-western people think about the past and react to this type of learning. It would very helpful to better understand my work here, because Crete is a cross-roads of the east and west and right now we tend to consciously look west rather an east. Perhaps this is a mistake.

When you first started your professional career, could you have imagined that this is where you would be now?   And where do you plan to go from here?

No, not at all. In fact, I had no idea what I would do and in many ways I still do not! The path I have chosen is one of exploration. I have continued in this way, because one opportunity and challenge comes and brings another, then another, and so on. I believe that having an education and being encouraged to think and act accordingly has given me strength to create.

What was the ultimate goal in pursing the Minoan Tastes project? Do you feel you have successfully accomplished that and what’s the next goal?

Initially, I wanted to learn the process of making Minoan-style cooking pots from local Cretan clays that are similar to the clay the ancient potters used. Once I discovered this, I wanted to learn how to cook in the pots and discover all of the types of tasks that were involved. Essentially, this was the “hands-on” aspect of my PhD research. Beyond that goal, I realized the cooking hearth was a tangible way for people to better understand ancient life on Crete.

My plans for the future involve creating different types of educational-based programs to collaborate with various types of institutes, restaurants, resorts, museums, as well as TV programs and documentary films. I am interested in using this type of “living-museum” platform to teach people about the Minoan and Cretan culture and to demonstrate why exploration of the past is important and what we can learn from it to create our future. I see this project as ambassadorial that builds bridges between the past and present, as well as bridges between people of different nationalities and backgrounds.

Jerolyn E. Morrison was born in Birmingham, Alabama where her parents went to college and where her mother’s family is from. Even though she lived in five different states as child (AL, GA, NY, KY, MO!), she considers Louisville, Kentucky home. This is where her father’s family is from and where she spent time during her formative years and graduated from high school even though she has lived in numerous cities across the US. She went to university in Texas studying fine arts and also worked and learned at the Penland School of Crafts in western North Carolina with a return to Texas for her MA in anthropology. In her early 30’s, her parents moved to New York City and she began splitting time between there and Crete. Today though, she spends the majority of time in Crete.

Stella Johnson is a second-generation Greek-American, who has been working over the last decade on a book project called “ZOI,” photographs of her grandparents’ birthplace. About Minoan Tastes Stella says, “It has been an honor and a privilege for me to collaborate with Archeologist Jerolyn Morrison, who has shared her extensive knowledge of East Crete and has introduced me to the culinary importance of the Minoan civilization.” Stella Johnson’s monograph AL SOL: Photographs from Mexico, Cameroon and Nicaragua was published by the University of Maine Press in 2008. She teaches at Lesley University College of Art and Design, Boston University and for the Maine Media Workshops in Mexico and Greece. Stella was a Fulbright Core Scholar to Mexico in 2003-2004 and a Fulbright Senior Specialist to Mexico in 2006, for photography and teaching, respectively.

To learn more, including information on upcoming events, or to enquire about hosting an event: