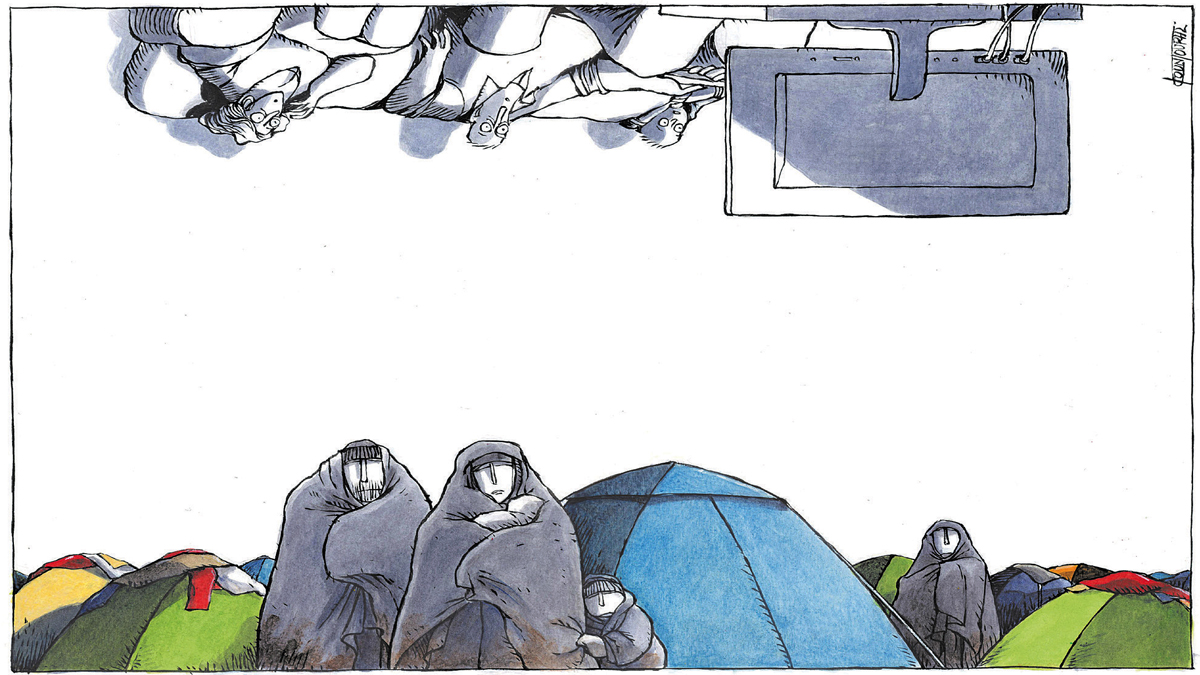 MICHAEL KOUNTOURIS: “Satire is a defense”

Having worked as a political cartoonist since 1985, having participated in many exhibitions all over the world and been awarded with numerous prizes, Michael Kountouris recognizes the power of sketches, especially of those without words, not only in message delivery and education, but also in disease awareness. Michael Kountouris says, “when used according to instructions, a sketch can break a bone, because it practically allows you to say anything”.

From where do you draw your inspiration?

From the reservoir of the everyday life. As a political cartoonist I am also inspired from the political and social routine.

You have recently published a new book of sketches inspired by the refugee crisis, entitled “Made in Europe” (cartoonark editions). What message did you hope to pass on with this book? Is the refugee crisis a “child” of Europe?

There is a sketch in my book, inspired by “The Princess and the Pea” fairytale. The story tells of a prince who wants to marry a princess, but is having difficulty finding a suitable wife. Something is always wrong with who he meets, and he cannot be certain they are real princesses. One stormy night a young woman drenched with rain seeks shelter in the prince’s castle. She claims to be a princess, so the prince’s mother decides to test their unexpected, unwitting guest by placing a pea in the bed – covered by 20 mattresses and 20 feather beds – she is offered for the night. In the morning, the guest tells her hosts that she was kept awake by something hard in the bed. The prince rejoices. Only a real princess would have the sensitivity to feel a pea through such a quantity of bedding, so the two are married.

The feather beds and the mattresses placed by the queen resemble all that Europe has: economic prosperity, principles, democracy, social protection reflexes. But a “pea” doesn’t let Europe settle. In my sketch, Europe is “bothered” by a saddlebag.

In Agathonisi, that tiny island of Aegean, people welcomed the refugees and didn’t close their doors. But this is not the case in many prosperous German cities.

Having no captions, my sketches use images from everywhere- to get the message delivered. From nature – one of my sketches depicts a huge snail (aka Europe) moving. As it moves, refugees are drowned in the saliva it leaves behind. I have also sketched a Pieta variation, where Virgin Mary is covered by a blanket and holds a kid wearing a life jacket. In this way, the spikes of this tragedy and this drama get a little bit “rounded”.

Last summer, I and other cartoonists organized an exhibition on several islands in the Aegean about the refugee drama happening. Among the visitors you could see the refugees themselves. It is very different designing a boat with refugees than facing the people who were inside the real boats.

One of the most shocking things though, was a note one left in the visitor’s book: “Thank you for becoming our voice in the world”. That was incredible… That message made us feel useful. We really felt that what we do is more than just create cartoons in newspapers; rather, we pass on important messages.

Υou have been awarded numerous times for your work as a cartoonist. What are the most important of these awards? How do you feel when you get such an award?

Compared to what I have just described, winning a prize sounds almost unimportant. A prize is definitely a vindication that makes you feel proud. Given that a cartoonist’s job is pretty solitary, we need the applause, and such events are the only chance we have to get applause.

I was awarded the First Prize at the Ranan Lurie UN Political Cartoon Award 2008, with a cartoon inspired by the environment. I was awarded the Grand Prix at the Biennale of Tehran in 2005, I got the First Prize in CURUXA 2005 international cartoon exhibition of Humor Fene Museum, and the Gran Premio Internationale Scacchiera, at the 37th Umoristi a Marostica, in Italy, back in 2005.

Can sketches and cartoons become a “learning tool”?

Sketches, especially those without words, have a great dynamic. Cartoons have some special characteristic that make them easily understood by children of every age, they convey messages in a simple and direct way and they arouse and stimulate students’ creative imagination. It is what teachers call “interdisciplinary” – that is, being able to get, for example, a picture from a movie and give it political dimension. This is very charming.

With the educartoon.gr platform, we have seen surprising uses of cartoons. Even teachers are surprised by the uses cartoons can get in education. We give them the material and we describe to them how it can be used as an educational tool, letting them free to go even further.

Can teachers use educartoon’s material for free?

Yes, sketches and courses are offered for free. The only thing we ask from the teacher is to register on the website.

I am proud of this innovative use of cartoons in education, because the initial idea belongs to my brother, who works as a teacher in Germany. The idea was initially tested in a village in Rhodes, with sketches carrying environmental messages. When teachers asked us where they could find the sketches, educartoon’s cornerstone was set!

It’s very important to see so many teachers who want to offer the best to their students, it’s encouraging to see these teachers eager to make lessons more interesting, more productive.

A teacher from Corfu, for example, took a sketch aimed at traffic education and did a lot more than teach kids about crosswalks. In this sketch a polar bear is showing her offspring how to cross a crosswalk. In their case, the crosswalk is made of ice pieces floating in the water. The teacher noticed that there were seven pieces of ice and used the sketch in music class, where each piece of ice was a musical note!

What is children’s response towards sketches?

It’s impressive. First of all, they decode them immediately. When you tell them what they symbolize, the result are even better.

You have also illustrated children’s book. How easy is it to create images for the eyes of a child?

Working on a children’s book is very difficult. Given that a fairytale is one of the first times that a child will come into contact with visual arts, the artist takes on huge responsibility.

Not only because children are tough and demanding, but also because you can’t hide anything from them. These little creatures hold a fairytale in their hands all day long looking at it.

In recent years you have been creating disease awareness sketches. What difficulty does this kind of sketching have? How effective can it be in patient education and prevention?

Medical issues are difficult to handle, because we are talking mainly about patients and about pain. Humor can function as a very good alibi in this case. Humor helps us approach very difficult issues and talk about things that are otherwise difficult.

You can get through the simplest of messages, such as smoking cessation, but also the most difficult issues, such as heart failure.

If you say to a child “do not smoke because you’ll die,” you’ll never get the message through. If you tell to a teenager “if you don’t smoke you will be able to play basketball and make a good impression with girls”, you will score more!

A sketch is a fun way to deliver your message. It was the son of a doctor who had seen a sketch from the book “The 100 Secrets of Hypertension” (en plo editions), where a teenager in a fast food restaurant is belted with burgers, instead of explosives. When this boy’s father told to him to visit a fast food restaurant for lunch, the kid recalled the sketch. It is striking how some things make an impression on children.

Is cartoon a way of defense in our everyday life?

I hope it is. Satire definitely is. Satire is, by nature, defending the weak, opposing the ruling power.

You have said in an interview that sketches are a freedom islet.

The sketch is a hybrid artistic genre, combining satire and image.

As a kind of satire and as a visual kind, it requires absolute freedom to work. And it is never against the weak. If it’s against the weak promoting governance’s interests, then it’s not satire, it’s propaganda.

Can a sketch “break a bone”?

When you use it accordingly, then yes, it can. Because it allows you to say anything. Satire, either political or social, has this power. Combined with an image, it can become an excellent anti-authoritarian tool.

Another advantage of sketch, is that no translation is needed. As I have recently read, there are only three global languages: images, mathematics and music.