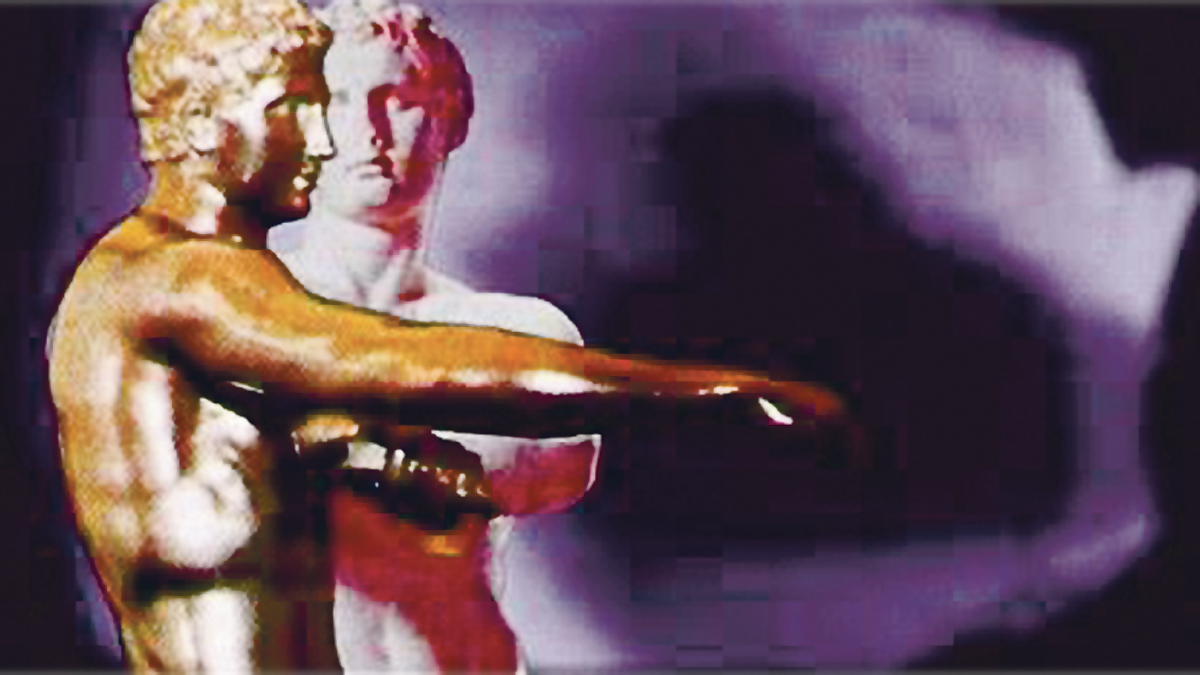 “Lysippos Epoesen, The Story and the Art of Alexander the Great’s Legendary Sculptor”

HE CHOSE BRONZE AS HIS MEDIUM

HIS MASTERPIECES HAVE REACHED US IN MARBLE

HIS STYLE BECAME THE IDEAL MODEL FOR SCULPTURE

GUIDE US ON A JOURNEY THROUGH TIME

AND THE WORKS OF THE MYTHICAL SCULPTOR

“Lysippos Epoesen,” inspired by the story and the art of Alexander the Great’s legendary sculptor Lysippos, has been selected to screen at the National Gallery of Art in Washington DC (West Building Lecture Hall) as part of the Greek Documentary Series program of activities celebrating the exhibition ‘Power and Pathos: Bronze Sculpture of the Hellenistic World’.

“I’m delighted witnessing ‘Lysippos Epoesen’ (aka Lysippos Created) standing the test of time,” says filmmaker Niko Franghias, former chairman of FilmHellenes-Greek Film Fest Chicago (2011- 2013), who is currently developing Chicago-based material for the official launch of his production company, EmberFrames. “We thank the National Gallery and the Documentary Series organizers – AGON, the John Goelet Foundation, and Dr. Eleftherios Ikono­mou’s ARTSetc. Intercultural Dialogues, Berlin, Germany – for including the film among the outstanding documentaries accompanying such an unprecedented exhibition.”

‘Lysippos Epoesen’ is a 57 minute creative documentary that premiered in 1996 at AGON, Greece’s International Meeting of Archeological Films, where, enthusiastically greeted by the audience, won the best script award. An audience award followed at the ArcheoFilmFest Rassegna Internazionale del Film Archeologico, in Italy. Throughout the years the film remains popular, screening at cultural events around Europe and Greece.

Lysippos from Sikyon of Corinth lived in the 4th century BC. He chose Bronze as his medium. His works, however, have reached us in copies from Marble. Destined to become Alexander the Great’s exclusive portraitist, he changed forever the art of his time by capturing the instantaneous moment of action introducing ingenious aesthetic and dramatic innovations. His style – characterizing the art of the new Hellenistic era – became the ideal model for sculpture inspiring subsequent artists throughout Europe. In the film, the Spirit of Bronze and the Spirit of Marble guide us on a journey through time researching the story of the mythical sculptor.

“The project literally landed on my lap while I was working in advertising in my home country,” recalls Franghias. “Largely based on Professor Paolo Moreno’s 40 years of research, I welcomed the commission as he is a phenomenal, notable scholar. I had found Lysippos’ style deliciously cinematic and I knew what a visually rich territory I was entering, but this didn’t necessarily mean we were going to have a film that wider audiences would care to see. I wanted to come up with the right ‘angle’ in order to deliver a storytelling that would spark imagination in visual terms rather than a standard dry scientific narrative,” Franghias explains. “When I re-visited the point that Lysippos forged his works in bronze but only marble copies of these original bronzes survive in our times, I thought, wouldn’t it be wonderful if we could see Lysippos’ story being related by the Spirit of Bronze and the Spirit of Marble through a universe that is no longer there? My producers became excited by my concept-art, so this is how the film’s metaphysical point-of-view was chosen.”

Filmed in Italy and Greece, ‘Lysippos Epoesen’ is produced by Fay Katsaris and co-produced by Kino TV & Film Productions and A.V.D. Giannikos. Featuring a versatile original film score by Anastasios C. Katsaris, it is written, designed and directed by Niko Franghias.

In addition to the international film festivals of archeological nature where the film was honored, “LYSIPPOS EPO­ESEN” has been exhibited at the Megaron Concert Hall of Athens, at the Thessaloniki Cultural Capital of Europe, at the Archaeological Society of Athens under the aegis of the Academy of Athens President, also in Sikyon of Corinth (Lysippos’ birthplace) in the Peloponnese, repeatedly by the Greek Public TV and in several cultural events around Europe (Germany, Belgium, Italy, Serbia, France, etc.).

In 2012, the film screened at the Archeological Museum of Delphi as a classic documentary on ancient Greek Sculpture. In November 2014, it was shown at the Hellenic Cinemateque as one of the top award winning films of AGON, the International archeological film festival of Athens.

Franghias is a Greek-born award winning filmmaker who has studied in Britain. After a stint with the BBC, he worked extensively (1989-2007) in advertising in Athens as an agency producer, visual copywriter and director. A number of his collaborations are winners of the Advertising Creativity Festival in Greece, reaching the Cannes Lions International Festival of Creativity in France. In film, Niko debuted as a writer-director-producer in 1990 with the 32 minute “639+1 Nights.”

Still freelancing in advertising, he followed with“Lysippos Epoesen” in 1996. Since then, Franghias has won major production-development a­wards from the Greek Film Center (Greece’s official State film agency) and the Media Program of the European Union for his three English-speaking features, projects which unraveled as the funding situation in Greece became steadily worse. He started over by moving to the U.S.A.

During the time Frnaghias spent preparing for his permanent residency and work permit, he co-founded FilmHellenes – Greek Film Fest Chicago, a non-for-profit corporation with the mission of identifying, promoting and celebrating Greek filmmaking talent from wherever it comes. Within Franghias’ three years as Chairman of the Board, FilmHellenes exhibited the works of 49 filmmakers from Greece and Cyprus, six Greek descent filmmakers from the USA, five from other countries and five non-Greeks. FilmHellenes also introduced an annual Honorary Award honoring Academy Award® winning Director of Hellenic ancestry Alexander Payne in 2012. The honoree for 2013 was literary icon Harry Mark Petrakis. In November 2013, Niko received his E16 green card, and, consequently, retired from FilmHellenes in order to concentrate on his filmmaking activities.

Today, Franghias, along with Terry Jacobs, leads EMBERFRAMES, a mainstream film production company with a global appeal. Located in Chicago’s grand resort city of Lake Geneva, Wisconsin, EMBERFRAMES embraces universal themes rich in history, the immigrant experience and what makes life inspiring, entertaining and meaningful in so many ways.

“LYSIPPOS EPOESEN” has been selected to screen at the National Gallery of Art in Washington DC within the Greek Documentary Series program of activities celebrating the exhibition ‘Power and Pathos: Bronze Sculpture of the Hellenistic World’ (continuing through March 20, 2016).

“…It was from the moments the public TV rose up its stature and admired its acquisition. The unique and perfectly… sculpted documentary of Niko Franghias, LYSIPPOS EPOESEN, was screened two days ago by NET (Greek public TV) on the international day of the museums ignoring the network antagonism. (In the same time-slot another TV network was broadcasting the highly popular series ‘Whispers of the heart’)…” Nikos Nikolaou, TO VIMA (Major newspaper publication in Greece)