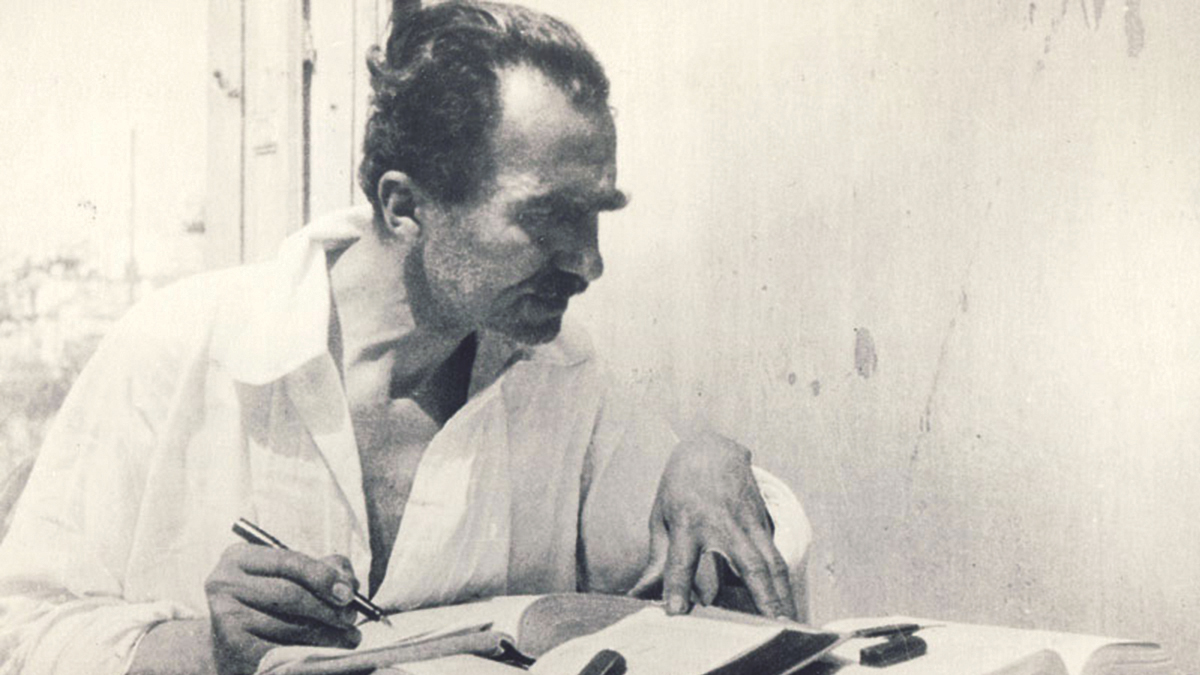 Kazantzakis Publications
Sharing the words of the great writer globally…

It was in only a short while after Nikos Kazantzakis’s death in 1957 that his wife and life companion, Eleni, disillusioned by the treatment of the then-publishers of her husband’s works, decided to take matters into her own hands and establish a publishing house which would publish the entirety of Kazantzakis’s titles, regardless of their popularity, commercial appeal or conformity to the existing societal and ideological strictures. In her vision, this publishing house (El. N. Kazantzakis Publications) would allow each title to be edited and published according to Nikos Kazantzakis’s progressive philological and grammatical credo and use of demotic Greek – which did not necessarily conform to the stringent mainstream editors’ ideals of the time – in aesthetically pleasing books, affordable to the reading public.

In 1967, Eleni met and established a strong friendship with the Stavrou family, a relationship which was destined to blossom into a family relationship. Eleni became godmother of the couple’s daughter, Niki, and in 1983 she adopted Patroclos and bequeathed to him the copyrights of the works of her beloved husband. By the time of her passing, in 2004, the entire literary production of Nikos Kazantzakis was being published and disseminated across Greece. Less than two months after his adoptive mother’s death, Patroclos Stavrou was sued by two of Kazantzakis’s grandnieces for the copyrights, however, the Supreme Court of Greece, Areios Pagos, with its 346/2011 decision in February 2011, vindicated Patroclos Stavrou, and allowed the Kazantzakis Publications to continue with the role it was established to fulfill: the publication and dissemination of the entirety of the works of Nikos Kazantzakis.

Sadly, Patroclos Stavrou, only a few weeks after the announcement of the decision, in April 2011, suffered a debilitating stroke, whereupon his daughter Niki, Senior Lecturer of English at the University of Indianapolis Athens at the time, took on the family business.

Niki, in her efforts to be true to the mission and life’s work of her godmother Eleni and her father Patroclos, continued to publish the all the works of Nikos Kazantzakis in the Greek language, but also furthered its scope to include the organization and support of national and international events for Nikos Kazantzakis, the development of educational programs for all levels, from kindergarteners to University students and lifelong learners, to granting, monitoring and offering consulting services for licenses for the theater, radio, television and film pertaining to the life or works of Nikos Kazantzakis. In 2013, the Kazantzakis Publications began to republish the totality of the author’s works in a fully revised modern line under the scientific responsibility of linguist Dr. Nikos Mathioudakis, one of Greece’s foremost experts in the linguistic idiom of Nikos Kazantzakis. The Kazantzakis Publications’ long-term plans involve the creation of textbooks based on the works of Nikos Kazantzakis, which they may be used as learning tools for the Greek language, as well as audio-books, narrated by beloved Greek actors and featuring Greek inspired soundtracks.

An interview with Niki Stavrou, General Director of Kazantzakis Publications 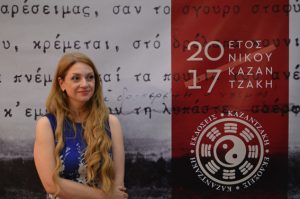 Q. What are a few of the “personal” things about Nikos Kazantzakis that people may now know? (for example, his love for Crete, how he documented Greek words, his writings for children)

In all our conversations about Kazantzakis, we find there are some recurring topics which always seem to spark the interest of our audience. One of those deals with a historical fact, which took place in July 1919 and whose protagonist was none other than Nikos Kazantzakis! It was a mission to save the stranded Greeks in Caucasus, a task of great national and humanitarian importance, bestowed upon Kazantzakis personally by the Prime Minister of Greece, Eleftherios Venizelos. He was to travel to Caucasus and organize the process of repatriation for thousands of persecuted Greeks after the establishment of communism in Russia in 1917. Nikos Kazantzakis, after a grueling and arduous journey, physically led approximately 150,000 deracinated Greeks to Macedonia and Thrace, where they resettled into a new life. One of his companions during this mission was actually Giorgis Zorbas, the man who was to offer his name and vibrant personality to Nikos Kazantzakis’s legendary character, Alexis Zorbas. This mission, Nikos Kazantzakis headed and carried out successfully proving that he was more than a deskbound “man of letters”.

Another interesting fact about his life was that Kazantzakis traveled extensively within Greece, from its northern to its southern boarders and passed from hundreds of small and large, poor or blooming villages and towns to record in history every Greek word he would discover spoken there. There, in his black little notebook he would make a note of every new word he heard and would then either use it in his work or record it for posterity. He wanted to ensure that no Greek word, be it the name of a tiny plant or a new notion, would ever die along with the last inhabitant of that place. His grand opus “The Odyssey: A Modern Sequel” (translated in English by Peter Bien and once a best seller in NYC) features more than 5,000 Greek words that are not found in any Greek dictionary (Mathioudakis, N. 2012).

Moreover, we would be remiss if we did not mention the incredible love that existed between Nikos and Eleni Kazantzakis, a lifelong romance which is beautifully depicted in Greek director Yiannis Smaragdis’s upcoming motion picture “Kazantzakis”. “To Eleni”, he once wrote, “I owe the daily bliss of my life; without her I would have died many years ago.” And Eleni wrote in her introduction of Nikos Kazantzakis’s autobiographical novel, “Report to Greco”:

“In my thirty-three years by his side I cannot recall ever being ashamed by a single bad action on his part. He was honest, without guile, innocent, infinitely sweet toward others, fierce only toward himself.”

(Report to Greco, p.10). Eleni also wrote the definitive biography on Nikos Kazantzakis entitled “The Dissident” which received the most distinguished honor that can offered to a publication in Greece, the Academy of Athens Award.

One other distinct but largely unknown fact about Nikos Kazantzakis was that he wrote essentially all genres of literature. Apart from novels, he wrote poetry, theatrical plays, tragedies with ancient Greek, Byzantine and contemporary topics, philosophical works, he made many translations of philosophical works (Nietzsche, Bergson, James, Darwin, Goethe, Dante, Plato, Homer, etc.) and children’s books (Vern, Dickens, etc.), traveling journals and even movie scripts.

Q. How far is the reach of Kazantzakis Publications? In how many languages can his works be found around the world?

The more than a thousand publications, republications, digitization or reprints of Kazantzakis’s translated books in over 52 foreign languages is a testament of the ecumenical appeal of his work, justly naming him the most widely translated contemporary Greek author. The dream and vision of Eleni N. Kazantzakis, has always been that each person in the world, regardless of age, ethnicity or religion, would be able to find and read all of Kazantzakis’s books in his/her own language or dialect. To fulfill this mission, the Foreign Rights Department of the Kazantzakis Publications diligently searches for and grants permissions to distinguished publishers in foreign countries, who can publish the works of Kazantzakis in faithful and accurate translations in their language, based on the Greek original text, in aesthetically sound editions, with wide ranging distribution capabilities, so that their books will always be available to their reading public. Since 2011, I have signed, renewed or amended more than 180 such contracts with publishers across the world.

Q. What do you think may be one of Kazantzakis’ most important writings? Did he also have a favorite, or most personal, novel?

Even though we treat all Kazantzakis’s works as equally important, since, according to the Kazantzakis Publications mandate, all of his titles are published without exception, the most popular of his books are “Saviors of God”, and his novels. “The Odyssey”, largely due to its size comes second to the novels, however, we have been told by many who have read it that it has changed their lives and gave them a new perspective to the world around them. His most personal novel would undoubtedly be “Report to Greco”, his autobiographical swan song, where he records his intellectual and spiritual journey in the form of a soldier’s report to his beloved ancestor El Greco, Dominiko Theotokopoulo. Also, children cannot but love “At the Palaces of Knossos”, one of the most profound and beloved children’s book connecting history, myth and the Greek spirit at the ancient palaces of Knossos in the Minoan Crete.

Q. Share with us some of the activities and efforts that are being made to educate young children about Nikos Kazantzakis (including the museum in Myrtia). Are there programs internationally where young children are honoring his gifts and memory?

This is one of the newly established missions of the Kazantzakis Publications. We believe that the works of Kazantzakis have amazing potential as educator’s tools for children of all levels and ages, as well as for adult lifelong learners. In May 2017, I held a special educational event with kindergarteners at Thessalonica, at the Thessalonica International Book Fair, with great success and the active participation of all the children who were present with their teachers, and a few days later, at the Greek Primary School of London, Nikos Mathioudakis and I held a seminar for children between the ages of 6 to 11, about the symbols and main concepts of Nikos Kazantzakis. And yes, indeed, the Nikos Kazantzakis Museum Foundation in Myrtia, Crete is also remarkably active in educational and artistic programs with young children.

Q. This year is Kazantzakis Year, are you hosting or participating in special events in Greece or abroad?

Indeed. The Ministry of Culture of Greece has declared 2017 as Kazantzakis Year. Numerous events have been held with great success (please see attachment) and more are being planned for the months ahead. Not a week goes by that a new event for Kazantzakis is either being planned or is taking place and we are absolutely ecstatic about this.

Q. What is your greatest desire for Kazantzakis Publications?

Before mentioning my deepest desire, I have to mention my deep obligation to the legacy of Eleni N. Kazantzakis: to continue to survive as a fully functioning publishing house, despite the economic crisis, in Greece of today. Seeing historical publishing giants fall like timber around us has not been the greatest moral boost, however, it is our responsibility to ride this financially debilitating wave and punch through. “Reach where you cannot” writes Kazantzakis and we use that motto in our daily lives and operations as well! However, our desire remains to go even further and realize all our dreams within the next decade; for one, we would like to see all of Kazantzakis’s works translated in all the major languages of the world and we long to see the children of the Greek diaspora, learning or perfecting their language based on bilingual textbooks of Kazantzakis’s works. To us, there is no better conduit for the strengthening of our hearts and spirit than the work of Nikos Kazantzakis and we would like to see it blossoming like his proverbial almond tree all across the world.