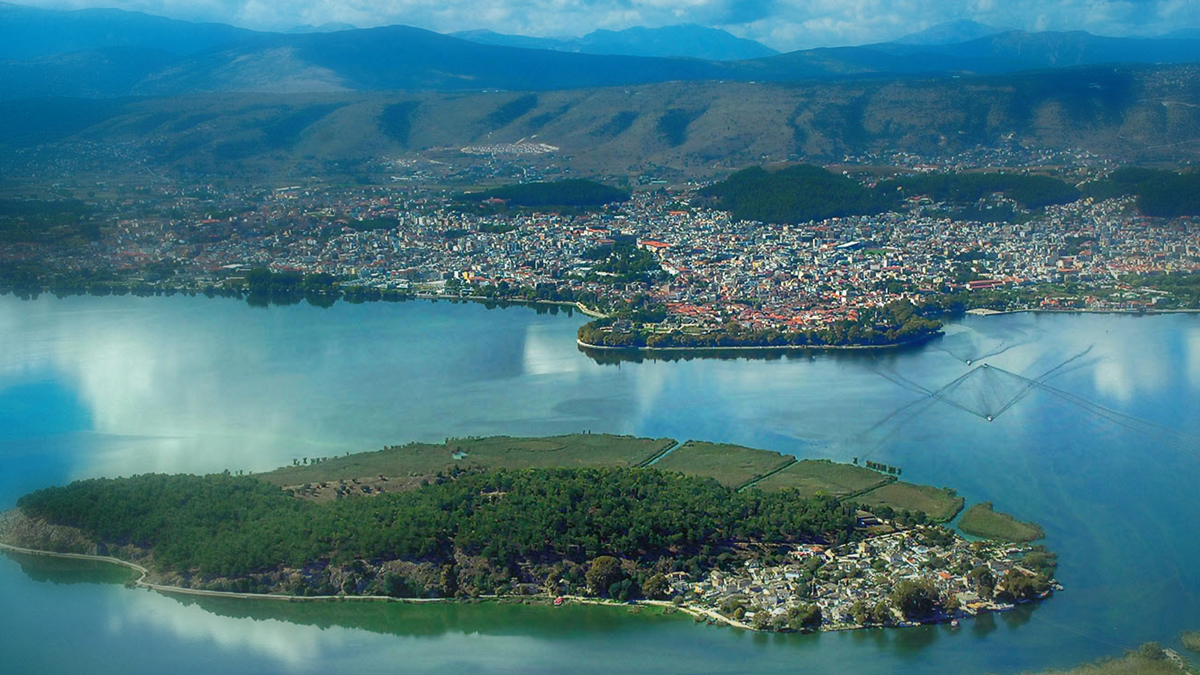 Ioannina, located in Northern Greece, is a captivating city which has made considerable contributions to the cultural life and history of the country overall.  This enchanting city has something for everyone, from a dynamic city center to peaceful lakeshores and stone castles, even the most discerning visitor will have an amazing time here.

Ioannina (also referred to as Yannena) is the capital city of Epirus and is situated around Lake Pamvotida. With a population of over 110,000, it is one of the more bustling provincial capital cities of Greece. Its vivacious character is attributable to a lively contemporary cultural scene, various special events and festivals around the year, restaurants, night life, and a branch of the National Greek University which adds a vibrant youthful energy. Exquisite landscapes combined with a contemporary city center lend to Ioannina’s reputation as a premier commercial and cultural center in northwestern Greece.

The modern city of Ioannina was founded in the 6th century AD by the Byzantine Emperor Justinian. However, Ioannina can trace its roots back tens of thousands of years to the ancient village of Kastritsa where artifacts were found as evidence of human presence during the Paleolithic period.  The modern city found prosperity in the 1400s when many wealthy Byzantine families sought refuge in Ioannina following the fall of Constantinople. Ioannina would become a major center of the Modern Greek Enlightenment during the 18th and 19th centuries after the Ottoman occupation had designated it and administrative center. It was finally incorporated into the Greek state in 1913.  The city’s multicultural character is manifested through the many churches, synagogues and mosques, which still exist today.

The city of Ioannina played a significant role in the 20th century history of Greece.  On October 28, 1940, Italian forces attacked Greece following the response of “Oxi” (no) from Prime Minister Ioannis Metaxas to the Italian ultimatum.  The main force of invasion occurred in the Epirus region by Italian troops early that morning.  After 12 days of battle, Greek troops successfully pushed Mussolini’s troops back into southern Albania on November 8, 1940 aided by the local men and women of the village Kalpaki,.

The War Museum of Kalpaki highlights this historic event, known as the Battle of Elaia-Kalamas,   and pays tribute to the villagers of Kalpaki for their heroic resistance. Visitors can see the cave which served as military headquarters while visiting Kalpaki. Walking up the hill from the War Museum, visitors will find a poignant statue erected in honor of the women of Pindus who carrIed supplies to the Front for the troops under extremely harsh weather.

There are a number of other “must-see” museums in addition to the Kalpaki War Museum:

The Wax Museum of Pavlos Vrellis celebrates various events and key individuals from Greek history. Established in 1995, it opened after great time and dedication from the founder Pavlos Vrellis.

The Archeological Museum of Ioannina includes findings from the Paleolithic Era through the post-Roman years. Copper utensils, miniature art, ancient coins and many other items can be seen from ongoing excavations.

The Municipal Art Gallery will familiarize visitors with the course of Modern Greek painting, as well as sculpture and engraving work.

The Municipal Ethnographic Museum is housed the Aslan Pasha Mosque inside the Ioannina Castle. The Mosque was built in 1618 and in 1993 it was renovated to its present form where permanent exhibitions of pottery, pictures, and other traditional decorative items, as well as jewelry, textiles, hand-weapons, wood-carved pieces of furniture and several personal objects are displayed.

In addition to the history, culture and folkloric tradition, the surrounding countryside provides a variety of activities and adventures.  Take a small boat on Lake Pamvotida and visit the “Nissaki” (the “small island”) enjoy lunch at one of the many traditional restaurants, visit the Ali Pasha’s house, buy handcrafted silver jewelry, and walk the paved alleys. For those who enjoy nature walks or bicycling, venture out onto the Lake paths.  Entrances to the Castle will transport you in time as you stroll through Ottoman structures that are still standing, like the Soufari Saray, the Mosque of Aslan Pasha, or the Jewish Synagogue.  Wander into one of the many tavernas and taste local cheese and pies with a shot of tsipouro, a traditional pomace distilled spirit.

Just outside the city, countless other wonders can be found such as: the ancient theatre of Dodoni; the 11th century Monastery of John the Baptist on Kastritsa Hill; and the Zagori villages, not to be missed by nature enthusiasts.

These villages, separated by vibrant blue rivers and architecturally artistic stone bridges, all lead to the Vikos Gorge.  Serene hiking paths wind through Zagori, mountain climbing at Mount Smolikas and the Dragon Lake (“Drakolimni”), and even river rafting in Tzoumerka. Also nearby is the village of Metsovo, perched on the Pindus Mountain range with its ski resort Politses, the Sequoia of Agios Nikolaos, and Traditional “Taps” where crystal clear water pours from the many stone taps found in the area.

To fully enjoy and discover the splendor of Ioannina, it should be experienced during each season. With every visit, it will leave you with memories of new things seen, experienced, and tasted… and then it will make you long for the time when you can savor it all over again!