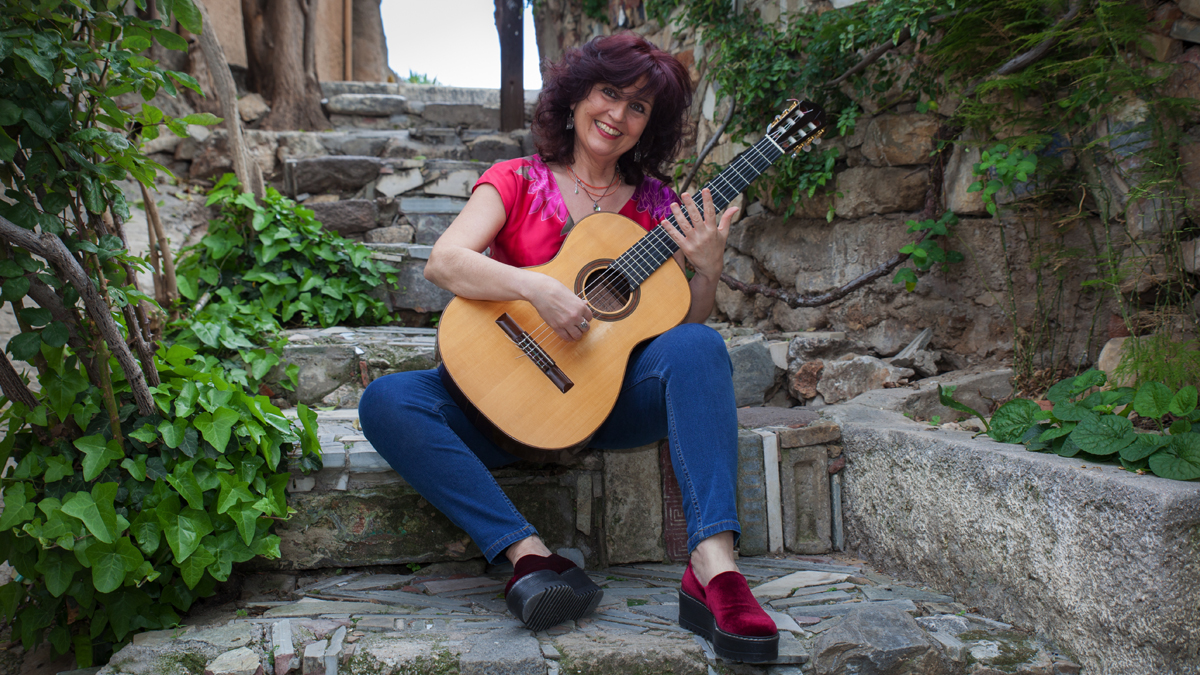 “Eleftheria Kotzia holds the stage with the sort of presence I have not seen for a while. She has a robust character mixed with a quiet sensitivity .You could say it is something like the voraciousness of Julian Bream combined with a feminine delicacy of control, an alluring combination – all infused with the pizzazz of Greek spirit”.
Classical Guitar (Purcell Room – London).

Born in northern Greece, in Alexandroupolis, Eleftheria Kotzia studied guitar at the National Conservatory in Athens, the Conservatoire National Supérieure in Paris, and finally at the Guildhall School of Music in London. Among her teachers have been Julian Bream, Alexandre Lagoya, Dimitri Fampas, David Russell and Timothy Walker. She was the winner of the first prize in the 6th International Guitar Competition in Milan.

Described by USA Review as doing for the Greek soul what flamenco does for the Spanish, Eleftheria Kotzia has toured regularly in Europe, Canada, the United States, South America, North Africa, Australia, New Zealand and the Far East. She has performed both as a soloist and with orchestras at many of the great International Guitar and Music Festivals. Eleftheria has also presented numerous works by Greek composers in her recitals around the world such as Theodorakis, Hadjidakis, Haliasas, Giorginakis, Pittas, Tatsis, and Boudounis.

What drew you to the guitar? When did you first start playing?

Initially I had heard the piano played by one of my relatives and I loved its full sound. But when I asked to have lessons since we didn’t have enough space in our home my father suggested I chose another instrument. My mother used to play the violin but I rather prefered The Beatles, Joan Baez, among others and also popular southamerican songs.

The classical guitar is and has been present in a lot of the Greek popular music that I love. So when I once heard the great classical guitar master Andres Segovia on the radio, playing Granados, I was so incredibly moved, I had tears in my eyes. That was what I wanted to play. So I chose the guitar.

One of your goals was to encourage non-Greek composers to create pieces for you that are Greek-influenced. Why this goal? How do you select from what is created for you? Do you have a favorite piece that has been created?

The guitar is often related to the music of Spain and South America. However in Greece the instrument has been used extensively in our folk/popular music, for example in the case of Hadjidakis and Theodorakis one may say in a sophisticated way. Our culture is rich, varied and unique. I wanted to promote my culture and my heritage. I set out (in 1992) on this initiative: the encouragement of non-Greek composers to write Greek -influenced music for me.
This has resulted in compositions inspired by Greek folk themes, our antiquity, the oldest Greek music fragment that dates 5th BC, Attica or Asia minor, the Byzantine chant by well known guitar composers. All compositions are influenced in different ways by the richness of the Greek heritage and I am extremely proud about it.
I don’t have any preferences, I approach composers that I admire, I just wish the pieces to be around 8-10’ long, so somehow substantial! At the moment I play a piece by Edward Mc Guire based on the Dance of Zalongos – in early 1899 with invading Ottoman armies approaching, women casted themselves from the mountain cliffs .

If you could perform with any other guitarist, living or dead, who would it be? Why?

I greatly admire the classical guitarist Julian Bream, he is still alive but has retired.
He is an incredible performer, he had a unique sound and intensity both in his live performances and his recordings.

I also would have liked to perform with Elvis Presley, I love rock and roll and he was such an electrifying performer …

What lies ahead for you? Are you touring, teaching or recording right now?

I have just finished the third part of my method ’le cahier de ma guitare’ that will be published by September. This is exam period for my pupils, so I will be totally dedicated in preparing them.

Later in the summer in July and August, I will be touring and teaching in France, among others to my own summer school and festival in the Chateau de Ligoure, in central France (www.guitarenfrance.org). Then I will be performing in a couple of Guitar festivals in Spain and Italy.

To learn more about Eleftheria, or to find her music:

Find an array of Eleftheria’s CDs on Amazon as well as downloads available at Amazon, Spotify and iTunes.

And be sure to see her live, there is truly no comparison for the real thing!