Politismos eMagazine | Celebrating Easter in Greece: A look at some of the unique customs, traditions and gastronomy
6855
post-template-default,single,single-post,postid-6855,single-format-standard,ajax_updown_fade,page_not_loaded,,large,shadow2 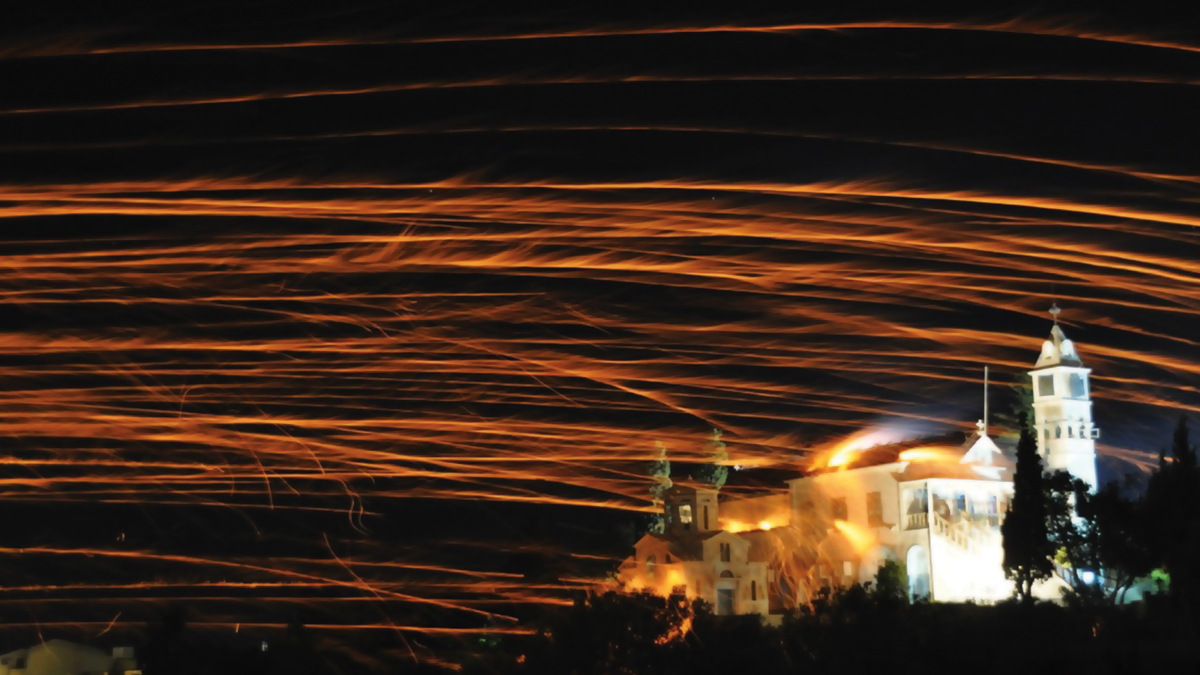 Celebrating Easter in Greece: A look at some of the unique customs, traditions and gastronomy

Easter, also known as Pascha, is one of the major religious celebrations in Greece. People from all over the country celebrate Holy Week, with the major celebrations occurring on Good Friday, Holy Saturday, and Easter Sunday. Greece’s unique history, especially events driven by Christianity and the Ottomans, influenced the formation of these widely-varying customs.

Though many customs are often unique to specific regions of Greece, some traditions are celebrated similarly throughout the country, such as coloring Easter Eggs and eating traditional foods like Easter Bread (Tsoureki), Easter Cookies (Koulourakia), or roasted lamb.

On the island of Chios, in the town of Vrontados, residents celebrate Easter with a Rouketopolemos, a customary “war” or competition of homemade fireworks – as many as 60,000 – between two local Churches: St. Mark’s and Panagia Erithiani. There are two stories about how the of Rouketopolemos began. The first version of the custom’s birth states that the Turkish occupation of Chios, and thus the prohibition of celebrating Pascha, influenced the emergence of Rouketopolemos as a tradition. The Christians of Santa Maria and San Marco Churches pretended to start a war against the Turks with rockets in order to keep them away while celebrating Easter. The second version of Rouketopolemos’ origins goes back to the 19th century, when the Ottomans of Chios took the locals cannons to prevent Greeks from starting a rebellion. In retaliation, the people of Chios initiated a war of rockets; Rouketopolemos commemorates this event.

Every year, Chios residents create thousands of fireworks and lots of small ramps for launching the rockets. The Rouketopolemos starts at 8:00 pm on Holy Saturday, when the locals begin shooting the fireworks from each church, trying to hit the bell tower of the opposing church. The battle can last until after midnight. The next day, they count how many rockets landed around the Churches’ yard. The event has become so famous it has been reported in international media, including BBC news!

The Burning of Judas in Crete, Thrace, etc.

Born out of the desire to punish the betrayer of Christ, Judas Iscariot, locals from various villages throughout Crete, Thrace, and other Greek regions burn an effigy that represents Judas.

Three days before Holy Saturday, the people of Crete begin creating the figure that will represent Judas, or Farmakos, using fabrics, straw, and wood for the body and two squibs for the eyes to facilitate burning. Then, they place the figure at a high point close to the local church for observers to watch the burning.

This custom is practiced in other cities as well. In Thrace, for example, children gather extra wood on Holy Thursday so that on Holy Friday, after the Epitaph’s procession, residents burn the figure of Judas with the collected wood.

It is said that long ago, a group of sailors from Leonidio went to Asia and witnessed the impressive practice of the flying lanterns. They adopted this custom; today, in the Peloponnese, one can see floating gleaming lanterns all over the sky celebrating the resurrection of Christ. Locals construct the lanterns weeks before the event using reed and paper. Each family creates and releases a lantern into the sky, usually followed by the lighting of fireworks and burning of the figure of Judas.

Every Holy Tuesday in Ierissos, a town in the Chalkidiki region, people dance in a line that is led by two village boys wearing traditional clothes; the boys raise their swords under a laurel arch. In the line, the boys are followed by residents lined up according to age, with the elderly at the front of the line. When the line dance is complete, they finish with a traditional dance called Kegeleftos, which represents and commemorates the Turkish slaughter of 400 Ierissos people in 1821.

Easter food and tradition in Greece

Easter in Greece is the ideal occasion to cook and enjoy wonderful traditional recipes. One popular Easter dish is Magiritsa, a traditional soup made using offal of lambs or other meat along with other spices or seasonings. Greeks eat this dish after celebrating the Resurrection, when the families return to their homes from midnight church services.

The main delicacy enjoyed on Easter Sunday is lamb on a spit. This dish requires many hours of preparation and roasting, people usually start the cooking early in the day. In some cities of Central Greece, like Amfikleia or Livadia, residents roast the lamb while listening to music played by local musicians.

Tsoureki, the Easter Bread that both kids and adults enjoy because of its sweet favor, is made of milk, eggs, butter, mastica, sugar, and milk. Some recipes include mahleb (Politiko Tsoureki) as well. Sometimes a red-dyed egg is placed in the middle of the tsoureki for decoration.

Another popular Easter dessert is koulourakia, small cookies that come in various flavors like orange and chocolate, cinnamon, or vanilla. These cookies are sold as pastries or are baked at home.

A custom followed throughout Greece, and by Greeks around the world,is the boiling and coloring of eggs on Holy Thursday. People usually dye eggs in many colors, but Greeks mostly use red to symbolize the blood of lambs Jews used to paint their doors during Passover as well as to symbolize the blood of Jesus. On Easter Sunday, Greeks play a game that involves cracking their eggs. The person whose egg does not crack wins the game and announces, Xristos Anesti – Christ is Risen. The other person responds with Alithos Anesti – Truly He is Risen!