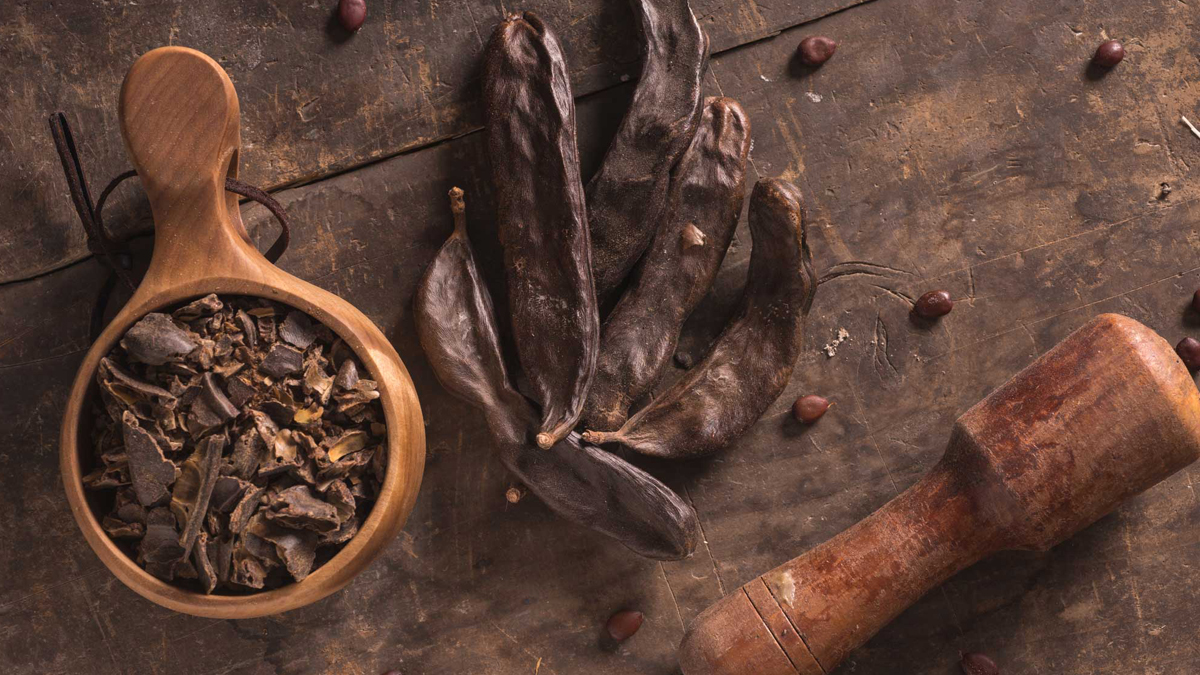 In the “Unique Foods of Greece” series there has been featured a diversity of alimentary goods; from superfoods and typical Greek products to foods of historic and cultural value. However, never have we discussed such an underestimated seed which was once only fed to animals and was hardly considered to be edible. For a fact, the overlooked Carob, the pod of the locust-tree which is native to the Mediterranean region, has played a significant role during times of famine and financial instability.

In ancient times, the weight of carob beans was defined as a unit of mass for gemstones and a measurement of the purity of gold as the beans have a standard, unvarying weight. Deriving from the Greek word for carob seeds, which is keration (keras=horn), comes the internationally used term of carat.

In Spain, during the civil war of 1936-1939 thousands of civilians are said to have survived solely by consuming carob seeds due to a lack of alimentary supplies. During the era of the German Occupation in Greece, carob seeds were also widely consumed and were called the chocolate of the occupation, due to their sweet taste.

Legend has it that throughout his ascetic life in the desert, John the Baptist fed on carob seeds. This is how the name St. John’s Bread has been attributed to carobs. Nowadays, it is called the ideal “survival food” as it lasts for a long time, does not require special storage conditions and can be consumed without preparation.
BENEFITS AND HEALING PROPERTIES
Apart from being savory to consume due to their sweet taste, carob seeds have a wide range of nutrients which offer health benefits. With twice as much calcium content than milk, carob consumption protects against osteoporosis by increasing bone density. In addition, carobs contain carbohydrates, magnesium, iron, potassium and vitamins A, B1 and B2.

The Arabs considered carob seeds highly efficient for treating chest infections and recommended them to patients with chronic bronchitis. Today carob has been proven to help treat asthma, alleviate cough and common cold symptoms and is a key ingredient in syrups.

The pectin and lignin contained in carobs aid in digestion and relieve stomach ache. Rich in fiber, carob seeds promote proper bowel function and fight against diarrhea symptoms. As they are stimulant-free, unlike coffee, they are easily digested and do not cause allergies.

Due to its antioxidant action, carob offers anti-ageing properties while the polyphenols and tannins contained have antivirus and anti-cancer properties. Moreover, carob seeds help regulate cholesterol levels and protect against cardiovascular disease.

With 60% less calories than chocolate, yet a similar sweet taste due to its sucrose content, carob is an excellent substitute of chocolate and cacao even for those who are allergic.

Carob seeds may be consumed plain or added in cereal bar recipes and beverages. When grinding the seeds, you get carob-powder which can be used in the place of regular flour in bread, biscuit or cake recipes.

It is also common to boil carob seeds in order to get a syrup which is as thick as honey but has a more coco-caramel taste. As carob-syrup is highly nutritious it can be used as a spread on top of bread or crackers or a natural sweetener in pancakes, donuts or low-calorie ice cream recipes and even as a dressing for salads and marinades.

As carob seeds and their derivatives are packed with nutrients, do not contain caffeine and are even suitable for those allergic to chocolate, why not try to integrate them into your diet?

Carob seeds are an all-natural sweetener which, in recent years, has grown in popularity among healthy nutrition enthusiasts.

In a study published in the US National Library of Medicine the beneficial effects of carob fruit were extensively demonstrated analyzing the indications that carob seeds “may be relevant to the promotion of human health and the prevention or treatment of some chronic diseases”. ¹

In another study also published in the aforementioned scientific website, it concludes that “adding polyphenol-rich foods such as carob to your diet may help reduce high cholesterol”. ²