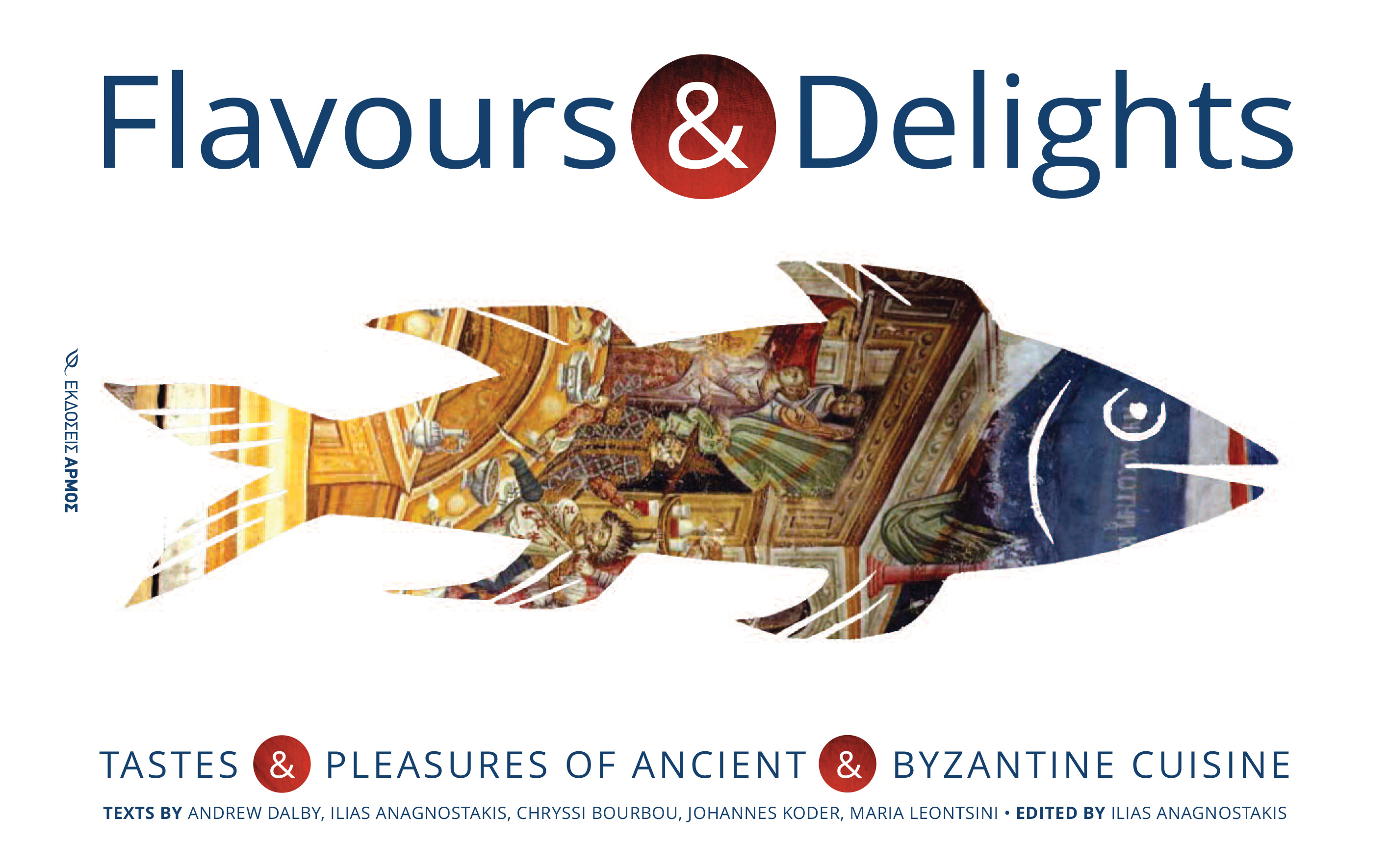 Byzantine diet and cuisine:
In between ancient & modern gastronomy

(The following are selected excerpts from the book “Flavours and Delights, Tastes & Pleasures of Ancient and Byzantine Cuisine”)

He who has dined with the emperor does not go straight to the tavern. Like this one, a lot of the views expressed in the “Life of Theodore of Sykeon” (mid-sixth century – 612) bear witness to a transitional period between ancient and Byzantine gastronomy. The saint was familiar with both ends of the spectrum alluded to in the quotation: the tavern in his youth and the palaces of Constantinople in old age.

Although, of course, in the above quote the meal with the emperor stands for the Eucharist and the tavern represents any form of worldly pleasure, they are nevertheless also emblematic of the two extremes of Byzantine gastronomy in social terms: the luxury of the palace, the nobility and the rich versus the popular but not necessarily poor food of simple folk.

In this article, Ilias Anagnostakis shares a brief overview of the two poles of Byzantine gastronomy, taking precisely the case of the celebrated ascetic Theodore as his starting point. What the Life tells us of the regimes of food and medicine (in a period when the two tended to be indistinguishable) is a useful introduction to (mainly) Byzantine gastronomy in the period from the seventh century onwards…

The Life of Theodore is, in fact, an important source of information about the ultimate imposition of certain Christian dietary models and culinary behavior on what had hitherto been enclaves of unchecked residual paganism in the interior of sixth-century Asia Minor. This area is particularly interesting as regards the subject in hand, as it harbored many pagan practices involving food common to Asia as a whole in the sixth century: festivals at which cattle were sacrificed, cauldrons of beef, shared out among the populace, no limitations on highly elaborate dishes, food prohibited in churches, superstitions relating to potions, apparitions of the goddess Artemis, and to certain creatures and unclean spirits that lurked over cooking pots and fountains with magic water.

The pagan models of diet, feasting and formal banquets co-existed and conflicted with the Christian versions which were being imposed, though not always (or everywhere) successfully, by bishops, saints and monks according to Christian principles of “gastronomy” or good eating. Many of these gastronomic usages, often associated with the advice of pagan physicians, were condemned and miraculously eradicated by the saint.

The Christian dietary model was always imposed after some miracle, refuting the pagan beliefs. Thus refusing to take part in some ancient custom involving food and condemning the ancient symposium entailed adopting another feast, the meal celebrated by the faithful, the Eucharist. It is no coincidence that for the first Christian martyrs the ultimate trial was being forced to eat the food sacrificed to idols (eidolothyta), in other words to take part in a pagan feast.

Refusal meant martyrdom and created a host of Christian martyrs who professed, inter alia, another kind of morality with regard to food. It is as if in Theodore’s day the battle between Dionysos and Christ, which had begun centuries earlier, was ending: a fight in which each was struggling to defend and impose his own feast. And to whom do the bread and wine belong in the end? To Him, whom Theodore saw in the flesh in the bread of the Holy Communion, the living bread which pulsated like a living organism and sprang up from the paten. Thus, banishing Dionysos to the taverns, the Heavenly King leaves no room for doubt: “This is my body, this is my blood”.

At the end of the very long period starting with Alexander the Great and continuing up to the time of Justinian I the politically and culturally unified world of the peoples of the Mediterranean and the Middle East, that melting pot of ancient customs, would undergo profound changes as it gradually became Christianized. It would be an overstatement to claim that, although there were obvious examples of continuity, the ancient gastronomic model was subject to such a profound transformation that it was all but annihilated, as happened in many other areas. In particular during the transitional period of the sixth and seventh centuries, i.e. in the time of Saint Theodore, what, despite religious differences, had hitherto been a way of life and diet more or less common to pagans and Christians, was changing ever more rapidly and the medieval Christian world was born. From this point of view the Life in question, which begins its narrative with the story of how a Christian “restaurant” was born, constitutes “a landmark in gastronomic history, the first such record anywhere in the world” (Life of St Theodore Sykeon; Dalby, Siren Feasts, 195; Anagnostakis 2005, 65-70)…

The impact of incursions and climate.

Just as way back in the fourth century the Latin West, at least according to the Byzantines, had succumbed to “barbarian” raids and adopted “barbarian” ways, the same thing happened later in the sixth and seventh centuries in the Greek East, apart from in Constantinople, Thessalonike and some other cities that resisted. However, before these definitive changes for Byzantium we have what is considered to be one final Byzantine gastronomic witness from the early sixth century, the account of Anthimos (fl. 511-534), a Byzantine physician in exile at the court of the barbarian ruler of Italy, the Ostrogoth Theodoric the Great. Anthimos would attempt to “sweeten up” the barbarians, especially the Franks, to whom he was sent by the Ostrogoths as an ambassador, by teaching them “Byzantine” cuisine. And he wrote, perhaps as a sweetener, a letter about food, now known as On the Observance of Foods, a valuable source for Byzantine dietetics. From then on for many centuries we have no gastronomic accounts, and anything of that nature that is recorded is above all dietary advice from physicians, such as Hierophilos. The gastronomic preoccupations of men of letters would give way to therapeutics and medicine, in which the main concern was to avoid or treat the so-called plague of Justinian I (so often mentioned in the Life of Theodore) and which was to last almost two centuries and decimate the population. This coincided with serious damage to the crops as a result of incursions by the Persians and the Slavs and Avars, with cities being razed to the ground and whole provinces abandoned. Moreover, all of Egypt, Syria and Palestine were lost to the Arab advance, as later on were Cilicia, Cyprus and Crete for years to come…

New names and new meanings for words gradually gained ground: e.g. for wine (krasin instead of oinos), bread (psōmion instead of artos) and fish (opsarion instead of ichthys). Each of these words conceals a different story about the new dining habits. The corresponding ancient words were retained in the official, imperial language but above all in church Greek, especially in the Divine Liturgy, which in parallel with the imperial cuisine was in symbolic terms at the opposite end of the gastronomic spectrum to the dinner tables of the common people and the tavern. These two opposites might meet (though never an easy thing to achieve), but only to be used as parables of imperial condescension or magnanimity and simplicity: the poor Constantinopolitan widow, who is visited unexpectedly by the Emperor Michael III (842-867), does not even have a table, but she spreads a sheet on the floor in order to o!er what she has, dry bread made with bran and hard asbestotyros, a new vulgar name for a white cheese likened to lime, the opposite of the a(n)thotyros, the “flower of cheeses”, which was a whey cheese. Thus for products and preparations but especially for cooking utensils and tableware a host of words of Late Roman provenance took over. But most importantly these new words correspond to profound religious and cultural distinctions…

The palace cuisine and cooks.

In relation to the imperial cuisine we have little evidence as to the sort of dishes produced in the palace kitchens, though by contrast there is an “ample sufficiency” of evidence for the types of food supplied to the emperor and the ceremonial fashion in which his meals were served. At the palace, because of the frequent presence of church dignitaries at most formal occasions, they were inclined to observe the Christian calendar of fasts (not, of course, the strict monastic version), but always with the appropriate splendor and luxury. The gold dining tables and finely wrought gold or silver vessels set with precious stones went together with complicated and recherché foods, good wines and sweets, all contributing to the impression demanded by Byzantine diplomacy when entertaining kings or ambassadors from abroad. Liutprand at least tells us about one composite palace dish, roast kid stu!ed with garlic, leeks and onions and dressed with garos sauce. We also know about the serving of sweets and tyrepsetos zomos,, quite possibly a type of fondue, and the elaborate banquets held on the occasion of imperial marriages, when tables were set up outside the great church of Ayia Sophia laid with a great many kinds of meat and wines from the Aegean islands for the populace of the city…

“Cooks’ skills” (mageiron technai), “the sophistry of cooks” (mageiron sophismata), “the sorcery of cooks” (mageiron magganeiai) and “the hands of cooks” (mageiron cheires) are some of the set expressions frequently found in Byzantine texts describing to what we owe composite or even some simple culinary preparations (skeuasia, paraskeuasma). And it is no coincidence that physicians would refer to one of their pharmaceutical preparations as a skeuasia or paraskeuasma too. The wonder-working hands of cooks, just like those of doctors, contrived preparations for the hungry, for pure carnal pleasure or for invalids and they could poison as well as cure. For physicians and cooks the knife was an extension of the hand that held it, as was the wooden spoon, the implement with which in various scenes, they are depicted as stirring the contents of a cauldron containing a medical preparation or food, what the Byzantines called the skeuasia.

To sum up therefore, from the sixth/seventh century up to the twelfth, Byzantine cuisine, but above all Byzantine gastronomy, were undergoing a process of formation and stabilization, differentiating them and distancing them from their ancient counterparts…

I believe that, just as in the Hellenistic and Roman periods different peoples coexisted in vast empires, preserving and exchanging their gastronomic customs, while displaying a relatively uniform but always evolving upper-class cuisine, the same happened in the Byzantine period and later under the Ottomans. This gastronomic syncretism is like the Byzantine composite monokythron, in other words a complex nostimos dish, bordering on the mythical, at the cutting edge of gastronomic inspiration and imagination, which bubbles away in the pot, i.e. the Mediterranean, that gastronomic melting pot of great variety and rich in taste with many flavours.

To purchase the book, visit:
www.armosbooks.gr

To read full text of the article online, visit:
www.eie.academia.edu/IAnagnostakis