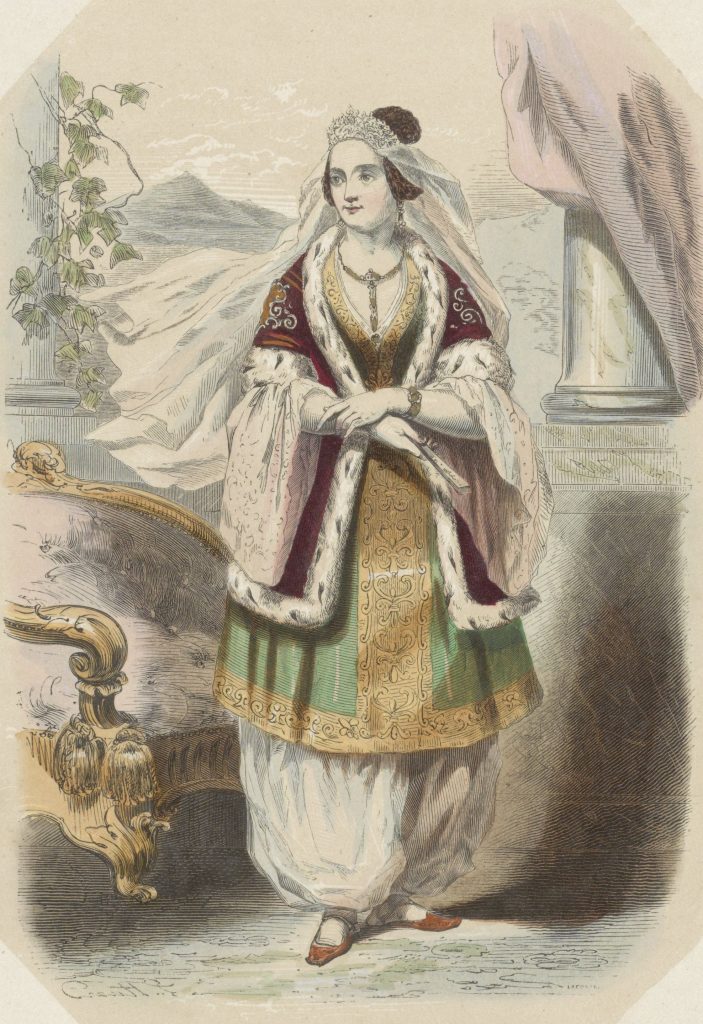 In 1837, when Queen Amalia arrived from Bavaria to the new capital of the Greek State, she found the city of Athens to resemble an Ottoman province. 400 years of Turkish occupation had left a deep impact in Athenian society, and most definitely on Greek fashion. The Queen, though, was enthralled with the fashion of her time. A wise woman, she realized that must approach her “odd” new subjects in a tangible way: fashion. She created a romantic folklore costume.The ensemble was acknowledged in history as   “the Amalia costume” and today is acknowledged as the national women’s costume of Greece. The new outfit created by the Queen combined elements of Greek and north European traditions. It was swiftly established (with diverse variations according to social and individual tastes) as the most popular piece of fashion in Greece of the19thcentury. The Amalia also influenced urban clothing and rural costumes in the Balkan region as well as Cyprus. The Queen’s outfit was comprised of:

– A dress with open bodice, or skirt made of rich and luxurious fabrics

– A blouse made of cotton

– A fez/Cap made of baize or silk fabric

– Jewelry and accessories from or inspired by European fashion

In her desire to bring a modern and fashionable flair to Greece, Amalia inspired and encouraged Greek women to abandon the prevalent costume of the Ottoman oppressor. Women of greater wealth used finer fabrics and expensive accessories. But even women of the lower classes found ways to imitate their Queen’s style and enjoy the flare of newly found fashion… and freedom.