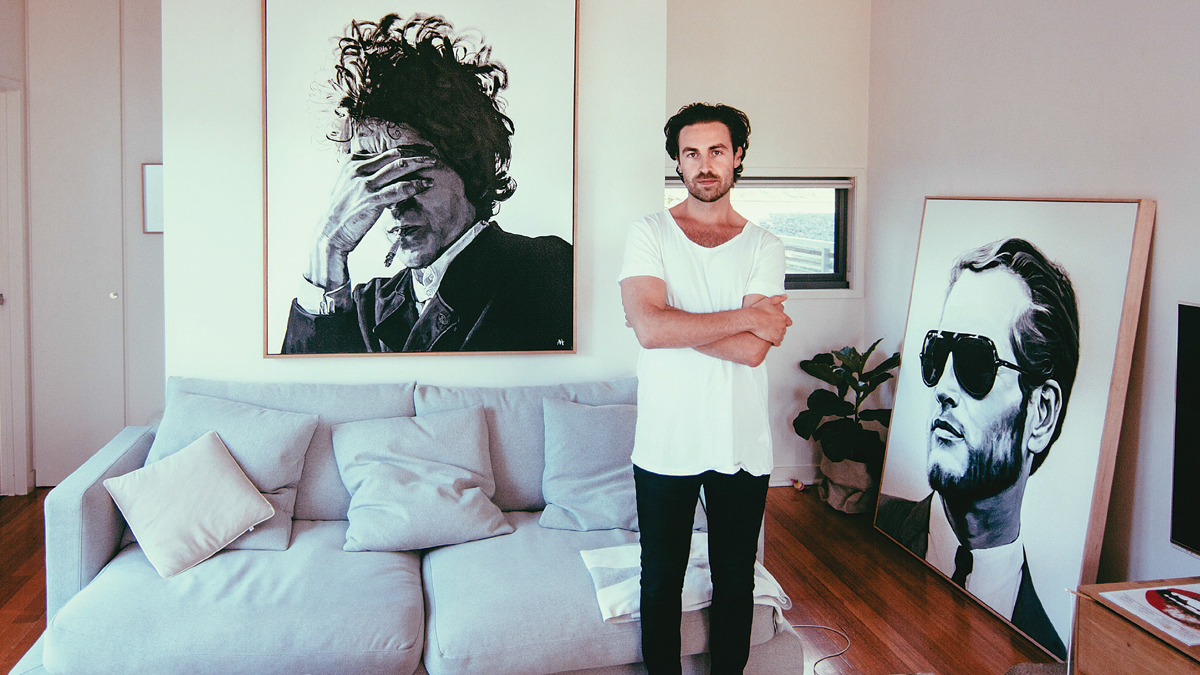 On May 29, 2016, artist Adoni Astrinakis debuted at The White Room Gallery in Bridgehampton, NY with three paintings from his “27 Club” collection – AMY, KURT, and JIMI. The paintings were received with great fanfare and were celebrated alongside works from EJ Camp, Bonnie Lautenberg, Laura Benjamin, Steve Joester and Evad.

The Golden Age of Rock n Roll” group show was the American debut for Astrinakis, who was born in Tasmania and now lives in Melbourne. For a few years after college, Adoni became CEO of a national healthy fast food chain that he turned profitable after several years. Not feeling fulfilled by the business world, he sold the business and decided to focus his efforts on painting.

Always inspired by pop culture, Adoni set out to paint a portrait of Bob Dylan. After posting it on Facebook and Instagram, Adoni very quickly started receiving inquiries for subsequent commissions. In his minimalist style, Adoni has painted icons such as Twiggy, Paul Newman, Tom Ford, Elvis, and Grace Kelly.  Politismos had the opportunity to speak with Astrinakis shortly after his New York debut.

Congratulations on a successful showing in New York! Share some impressions with us about the event, about New York?

Thank you! Well, the exhibition was at the White Room Gallery in Bridgehampton and it was electric. A packed house, the DJ was playing great music and everybody was there to really appreciate the art and talk with the artists. It really was the hot ticket in town that night.

The thing that left the greatest impression on me about the show and New York is how genuine everybody was. Each and every person I met was genuinely interested in finding out about what drives you, or what your ambitions are, and especially, how they might be able to help! It really says something for the culture in New York and it’s incredibly encouraging.

Do you remember the moment when you picked up your brush and decided “this” was you wanted to do as a career?

Haha, well it didn’t happen that way in the beginning that’s for sure! I had put down the paintbrush at age 16 (after year 11 art class) to focus on following in my father’s entrepreneurial footsteps. I earned a commerce degree at University and went on to a life in business. After some time I wasn’t feeling fulfilled and so, as a distraction, in 2013, for the first time in 16 years, I decided to pick up the paintbrush again. I think I also had a yearning to take true control of a project without anybody else’s influence. My first work was inspired by an incredible Jerry Schatzberg photograph of Bob Dylan. It was really refreshing and rewarding to have completed something I was genuinely proud of and I had even surprised myself that my technical skills had sort of matured with time. I was shocked at how quickly the interest for my work spread. So, in February 2015, I made the decision to focus on art full time.

I find this really hard to explain. I just get captured by certain subjects or images and I feel this innate need to capture it back in some way. So I try to express that on the canvas.

If you had the opportunity to have your portrait painted by any artist, living or deceased, who would you chose?

What? How can I answer that! I don’t know. If push came to shove, probably Rembrandt. But for cool factor I’d go for Andy Warhol on the side. Am I allowed to do that?

Is there a piece you created that you feel especially connected to?

Yes, it’s definitely my first work, the Dylan I referred to earlier. It is the sole reason I’m able to do this now and I painted it in a completely raw state. I had no expectations; I didn’t think about it, it was just pure flow and natural energy. It sits pride of place in my living room and I’ll never part with it.

What is the best part about being an artist?

You have this idea in your minds eye, you can see it, and then you literally bring it to life on the canvas. And when somebody is so emotionally taken with your work that they want to own it, it’s the sweetest and most rewarding feeling.

If you could have your choice of anywhere in the world, where would you want to exhibit your work? Why?

Well, I think I just did that! New York for me has such an exciting art scene and history. It’s incredible to be part of that.

What are you working on now?

In between commission works I’m completing my “27 Club” series which shines the spotlight on five fallen musical icons who tragically died at 27.

We’re featuring Crete this month in Politismos and we learned your father was Cretan. Have a favorite memory about Crete, or place to visit?

I love Crete so much! I always visit the Minoan Palace, Knossos. It is such a special place for me. But my absolute favorite place to visit is the Lions Square in Iraklio. I unfortunately never met my Pappou and my father tells me stories about how when he was really young, he used to go there with his father and eat bougatsa! He says it is the best bougatsa in the world and I can tell you, it must be true!