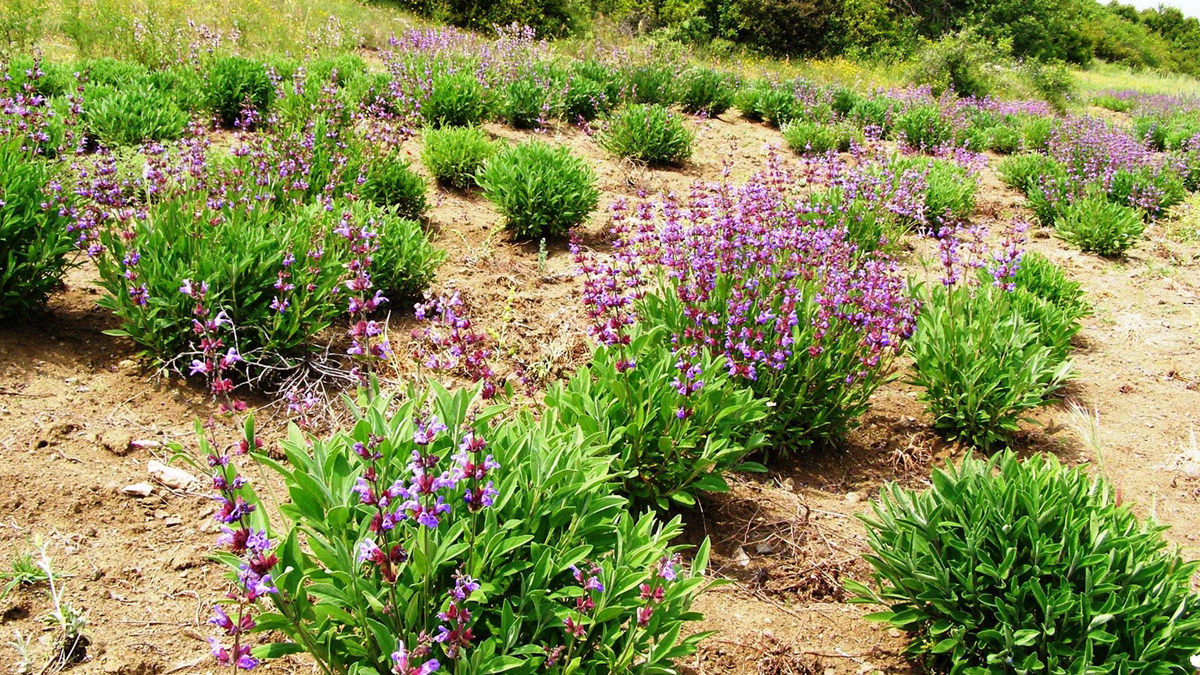 The unique foods of Greece and their health benefits: Aromatic Greek Sage

Since ancient times, the Greeks had realized how precious the gifts of Mother Nature were. The Mediterranean climate along with the geological formations of the country created a fertile ground where an abundance of wild herbs and plants could grow. About 1800 endemic species that grow on Greek soil have certified medicinal properties and this month we look at one of the most popular of all – Greek Sage!

Common sage (Salvia Officinalis) is a perennial herb grown in regions all over the world and used for its culinary and medicinal properties. Despite its global cultivation, it is the Greek Sage variety (Salvia Fruticosa) with its intense aromatic flavor and medicinal value that plays a leading role in international markets. As 50-95% of dried sage sold in the North American market is of Greek origin it is evident that Greek Sage bears a distinguishing trait that makes it unique.

Greek sage is an evergreen shrub whose height and width ranges from 60cm (23.6 inches) to 1m (3.2 ft.). Its leaves, wide and flat, grow in abundance and form clusters that give the plant a bushy appearance. The plant produces corymbs of purplish flowers. The herb blooms from early May till the end of June and is collected during the months of June and July.

Its preference for dry and rocky locations is the reason why it can be seen growing in regions all over Greece. However, it is lavishly found in Crete and the Cyclades where the landscapes are abundant in mountainous hillsides.

The morphology of these islands’ soil, as well as climate conditions, are key to the sweet aromatic odor of Greek Sage which has made it famous worldwide.

Greek sage, depicted on Minoan frescos in Knossos, has long been acclaimed for its medicinal properties; the ancient Greek pharmacologist and botanist Dioscorides as well as Pliny and Galen were quick to trace the diuretic, Anti-hemorrhagic and tonic properties of the herb. The scientific name of Sage is Salvia, a derivative from the Latin “salvare” (=to feel well and healthy); and in fact, a look at the health benefits of Sage comes to prove that the herb lives up to its name.

Greek Sage contains intense oils, flavonoids (including diosmetin, apigenin and luteolin) and phenolic acids including rosmarinic acid which functions as an antioxidant and helps prevent diseases of the respiratory tract. The phenolic acids in sage can also help treat throat and gum infections and mouth ulcers.

In a study published in Complementary Therapies in Medicine, sage was found to be effective in lowering blood glucose and cholesterol. Researchers concluded “sage leaves may be safe and have anti-hyperglycemic and lipid profile improving effects in hyperlipidemic type 2 diabetic patients.”

Sage leaves are commonly used to treat skin conditions and have shown to be effective against acne, eczema and psoriasis. Sage essential oil is also a key ingredient in many pharmaceutical products and dermo-cosmetics.

The flavorful leaves of Greek sage may be used to prepare an herbal tea beverage, rich in healthy benefits. As a tablespoon of sage is a valuable source of vitamin A, calcium, iron, magnesium, B vitamins, thiamin, and riboflavin and offers 43% of the daily recommended intake of Vitamin K, it is evident that a cup of warm sage tea (faskomilo) is a health booster!

Simply add about two tablespoons of dried leaves into a teapot, fill with boiling water and let it steep for 5-10 minutes.

Sage can also be used as a seasoning as it goes well with beef, pork and chicken recipes; however, due to its strong flavor it should be used sparingly.

In ancient Greece sage was a sacred herb dedicated to Zeus. Nowadays, little has changed as sage is a precious and essential ingredient studied worldwide. In research published in the US National Library of Medicine/ National Institutes of Health there has been a thorough analysis on the properties of sage potent to ”Prevent and Cure Illnesses such as Obesity, Diabetes, Depression, Dementia, Lupus, Autism, Heart Disease, and Cancer.” https://www.ncbi.nlm.nih.gov/pmc/articles/PMC4003706/

It is apparent that sage is an herb that could have a positive effect on various parts of the body and health aspects. Greek sage (Salvia Fruticosa) in particular, thanks to the morphology of the ground and the climate of the country, is of top quality. Local agricultural units in Greek regions and especially in Crete and the Cyclades have built a growing interest in cultivating Greek herbs. In the Cyclades, in Syros, Cyclades Organics (a local company), responding to the inland and international demand for Greek quality herbs are cultivating organic products meeting the standards of the EU regulation since 2012.