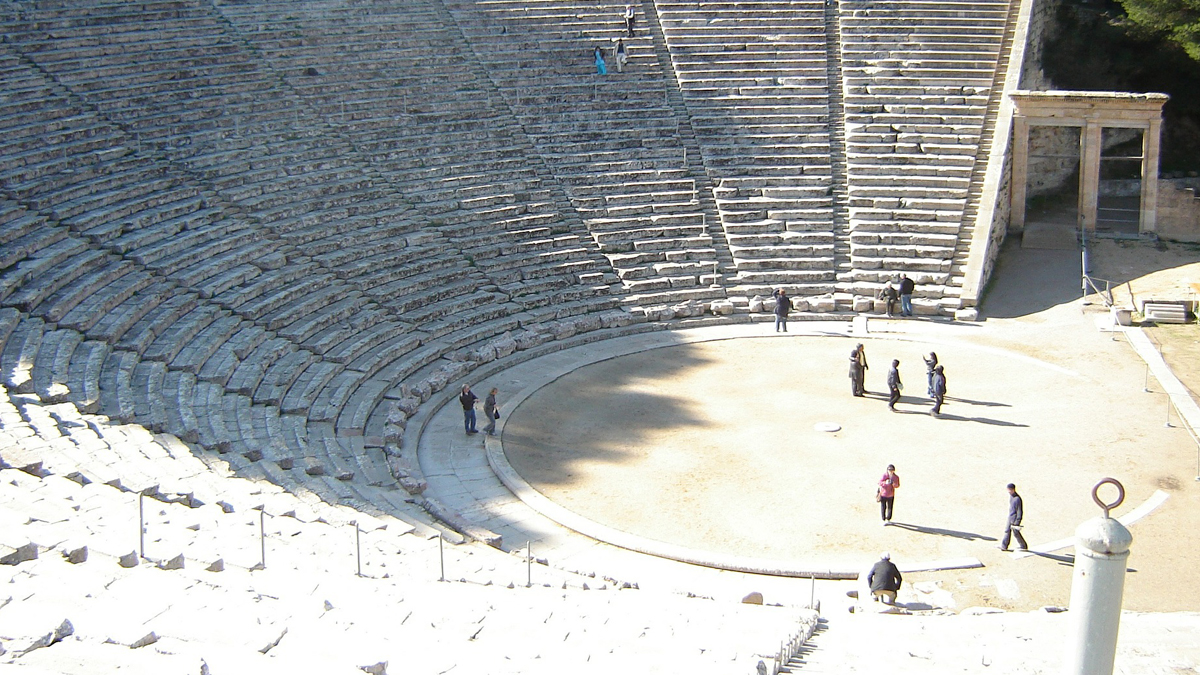 Theatre – the Social and Culture Cradle of Ancient Greece

Used for everything from religious rituals, arts competitions, performances and even city council meetings, theaters were an integral part of the social life of Ancient Greece. The quality of acoustics of the ancient theatres is well known and admired. Today, more than 2,500 years later, these theaters continue to leave people in awe. Amphitheaters are built all over the world – and in this modern age of technology and excellence, architects and designers continue to replicate the Ancient Greek model.

Epidaurus Theater, one of the most significant monuments of classical antiquity, stands out for its fantastic acoustic quality and its symmetrical proportions.

According to written sources, Polycleitus designed the theater. The Roman architect Vitruvius had admired how the ancient Greeks had arranged the seats of Epidaurus “according to the science of harmony” so that the voices of the actors could be heard more clearly. Even the slightest of a whisper in the theater is sound clearly at a beam of 60 meters.

The theater was highly praised for both its symmetry and its beauty in Pausanias’ writings. With a capacity of 13,000 to 14,000 spectators, the theater hosted music and dramatic events, including those dedicated to the worship of Asclepius.

The theater was also used as a means of treating the health of patients – it was believed that watching dramatic performances had beneficial effects on the patients’ mental and physical health.

Herod Atticus built Rigilla in the 2nd century CE in honor of his wife who died in 160 CE. The building was primarily used for musical events, hence called “the Conservatory”.

The need for its construction arose after the collapse of the previous conservatory that had been built in the center of the ancient market of Athens by Augustus Agrippa, in 15 CE.

Excavation of the Herodion started back in 1848. Through gradual, partial restoration, the monument’s ancient buildings came to light. Seating for the audience was laid with Penteli marble, and the orchestra was restored using marble slabs from Ymmetus.

Since then, the open-air theater Herodion has been used primarily for summer cultural events. Countless Greek and international artists have performed there, one of the most memorable being Maria Callas in 1957.

Magnificently integrated into the natural environment, the Delphi Theater was built in the 4th century BCE. It underwent much restoration and alternations during the 2nd century CE.

Ιt is the largest building within the Apollo Sanctuary and is directly linked to the worship of the god. The first excavations in the theater began in 1895 by the French School of Athens under the direction of Th. Homolle.

In May 1927, for the first time in almost 2000 years, an ancient tragedy was staged at the Delphi Theater! The play was staged as an integral part of the Delphic Festivals and was organized by the renowned poet Angelos Sikelianos with his American wife, Eva Palmer.

Located on the southeastern slope of the Acropolis Hill, tangent to the city’s eastern wall, it is the most impressive building in the ancient city of Philippi.

Despite changes it has undergone over the centuries, the Ancient Theater of Philippi is a functioning structure and is the host location of the Philippi Festival every summer.

The ancient Philippi Theater was built in the mid-4th century CE and is one of the earliest stone (it is actually built of marble) theatrical buildings in Greece. The ancient theater provides a panoramic view of the city to the spectators.

The theater was unearthed in 1921 by French excavators who continued their work through 1937.

Located at the northern part of the modern city of Sparta, the Sparta Theater sits on the southern slope of ancient Sparta’s Acropolis.

Pausanias, when he first visited the theater in 160 CE, was so impressed that he called it a theater worth seeing. Sparta Theater is distinguished for its size and its quality of construction, which is also reflected in the use of domestic white marble.

The use of marble for a theater of this scale was an innovation, not only for Sparta, but also for the whole of the Peloponnese. Although the theater has not been fully excavated, visitors can easily distinguish that it is a huge architectural and technological achievement of its era.

The magnificent theater of Larissa was built in the first half of the 3rd century CE and remained functional until the end of the same century when an earthquake destroyed part of it. A second strong earthquake in the 7th century CE brought about its total destruction.

Its original construction correlated with the worship of the god Dionysus and performance of theatrical productions. It was also the epicenter of social life in ancient Larissa. This is evidenced by a multitude of findings, notably inscriptions and sculptures.

Larissa Theater also hosted meetings of the highest regional authority, the so-called Communion of Thessaly. By the 1st century. CE though, the Romans turned Larissa Theater into an arena.

In its early life, the Messina Theater was not only a place for performances and spectacles but also a gathering place for citizens to discuss political matters.

According to Plutarch, a crucial meeting occured between Philip of Macedonia with the General of the Aratos League in approximately 214 CE, apparently one day after a popular uprising that led to the slaughter of many city officials and 200 noblemen.

From an architectural point of view, the theater is considered an ancestor of the “colossal” theaters and amphitheaters of the Roman era. Messina Theater construction dates back to the 3rd century CE.