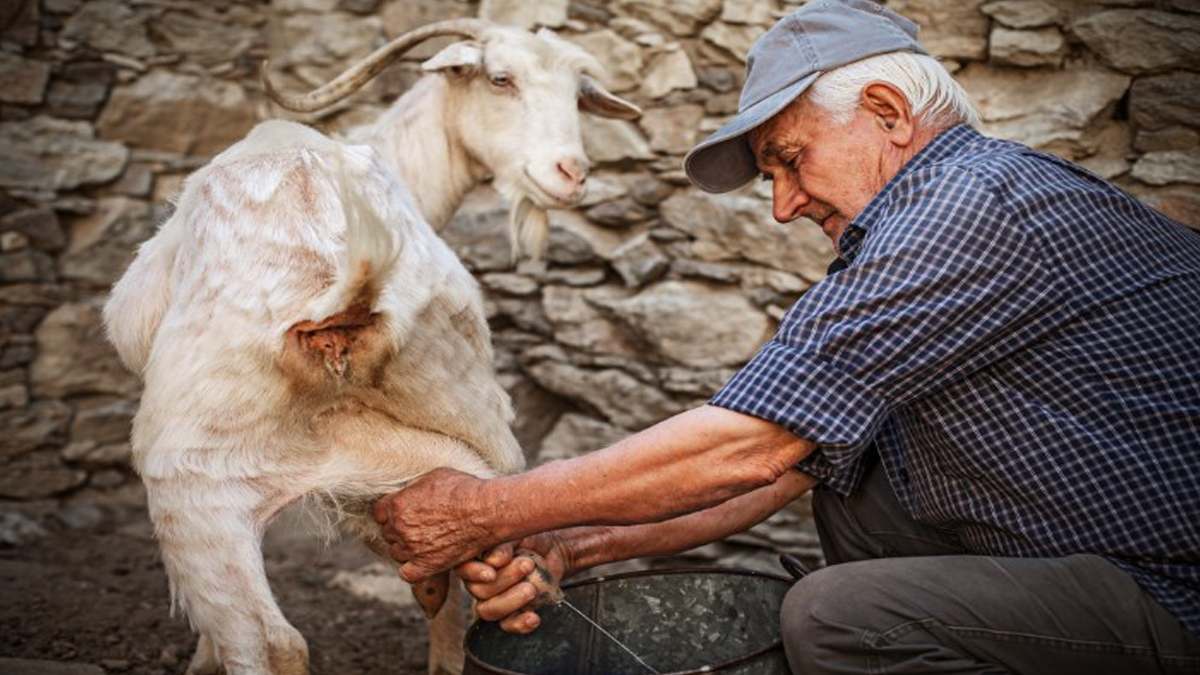 Since ancient times, the Greeks had realized how precious the gifts of Mother Nature were. The Mediterranean climate along with the geological formations of the country created a fertile ground where an abundance of wild herbs and plants could grow. About 1800 endemic species that grow, or graze, on Greek soil have certified medicinal properties. This month, we take a look at the silky goodness of goat’s milk!

In every culture there are certain figures which appear as repeated patterns throughout history and even mythology. Those patterns connect the past with the present, empower a nation’s identity and bond to its ancestors. In Greece, goats and goat milk have been a motif seen from mythology and history until today, bearing a cultural and even financial effect.

In mythology, the father of the gods, Zeus, was nurtured by a goat named Amalthea. As Zeus’ father, Cronus, would devour his offspring after birth, Rhea decided to keep her infant safe and gave him to Amalthea who took over his upbringing in a cave on Mount Ida (Crete) and fed him with her milk.

Legend has it that one day Zeus broke off one of Amalthea’s horns and using his divine powers, turned it into the symbol of abundance; anyone who called upon the Horn of Plenty (Cornucopia) would be granted all the goods. After Amalthea’s death, Zeus turned her skin into a sacred symbol of protection; whoever is “under the aegis” is secure – a figure of speech we use even to this day.

Solace and shelter is what the people of Greece seem to have found in aegis even in times of war and poverty; in the 20th century every rural household reared at least a goat which provided the necessary daily supply in milk that could also be used to make cheese, butter or yogurt.

What was once a matter of survival is nowadays a considerable source of income; Greece finds itself in the top rank of goat population in the European Union (6,000,000 goats) with a milk production of 120,000 gallons a year.

Autonomous by nature, goats are open range animals which need broad and free space to grow and browse even on low vegetation. Free grazing results in quality meat and milk which is proven to have a higher nutritional value than cow milk.

In fact, goat milk has a higher content of Vitamin A which helps maintain healthy vision, enhances brain function and skin health by fighting cell damage. The mineral elements magnesium, phosphorous and potassium are better absorbed through goat milk consumption rather than cow milk, leading in a more efficient protection against osteopenia and osteoporosis.

Goat milk contains lower lactose amounts than cow milk, meaning that it is easier to digest and is also suitable for those with lactose intolerance. Moreover, the liposomes contained in goat milk are more easily broken down by intestinal enzymes; this acts against allergies and asthma and helps treat gastric ulcers.

As a cup of goat milk covers 20% of the daily riboflavin (Vitamin B12) needs, it aids in regulating red blood cells growth and boost the immune system. A good source of niacin and selenium, regular consumption improves cholesterol levels, regulates thyroid hormones and lowers the risk of cardiovascular diseases.

Goat milk is also used in dermocosmetics; goat milk soap and creams are a natural moisturizer, nourishing the body with valuable vitamins and minerals.

Goat milk is available in raw and pasteurized form; in order to benefit from its nutritional value without running any health risks, it is safer to be consumed pasteurized. While there is no limitation to its consumption, a glass per day is enough to provide you with healthy nutrients.

A glass of goat milk has 170 calories and is a source of 33% of daily calcium needs and saturated fat, 27% of phosphorous, 20% of vitamin B2 and 14% of potassium. By adding a glass in your morning or evening diet plan you get an instant health booster.

Pour it in a bowl of cereal or granola in order to get the needed protein and fiber to start your day! Moreover, goat milk is an ideal addition to smoothies and milkshakes; blend a banana, a handful of spinach and some goat milk and you have energy on-the-go.

Finally, who said that health benefits do not go with pleasure? Homemade ice cream made with goat milk and any other flavor preferred is just an example!

Replace cow’s milk with goat’s and you will soon find a reason to consume it daily.

Zeus, the father of the Gods, was brought up with goat milk which was, also, often mentioned in Homer’s epic poems. The Greeks grew up with goat milk in times of war and recession. The significance of this beverage comes to be proven by scientific research.

According to a study published in the US National Library of Medicine, fermented goat milk consumption seems to have positive effects during anemia recovery and strengthen bone health. ¹ ²

Research carried out by the University of Granada suggests that goat milk is more beneficial compared to cow’s milk. It concludes that “Goats’ milk was found to help with the digestive and metabolic utilization of minerals such as iron, calcium, phosphorus and magnesium.” ³

Goat milk has been a superfood in mythology, during past times and seems capable of keeping this label in the future!