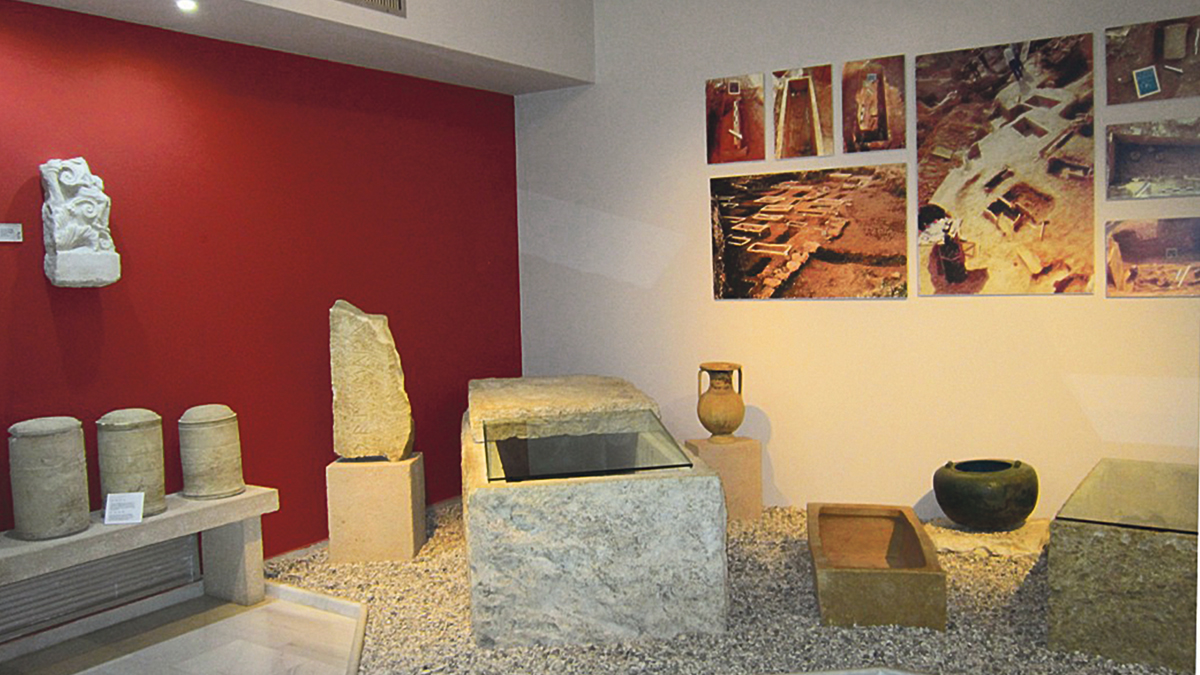 The Museums of Lefkada

Looking to discover the cultural treasures of Lefkada?  Visitors will find a treasure trove of museums and cultural centers on this beautiful Ionian gem…

Looking to discover the cultural treasures of Lefkada? Then, the first stop in your treasure hunt should be the Archaeological Museum of Lefkada, housed on the first floor of the mansion of the old town hall, together with the Cultural Centre of the municipality. The museum shows the evolution of the island through the ages by way of presenting findings from the Palaeolithic Age (200.000-35.000 BCE) until the late Roman Empire era (4th century AD).

The Archaeological Museum is divided into four galleries that present a chronological, and thematic, story.  From the most primitive of tools and musical instruments, to golden funerary wreaths and rich jewelry, the first three galleries explore life in Lefkada from the Classical to Archaic periods.  However, Gallery D is a special treat, dedicated to the work of Willhelm Dorpfeld.  It is here where visitors will see the most ancient of artifacts, including stone artifacts that present proof of life during the Mid-Palaeolithic period (200000-35000 BCE).

Dorpfeld began his career at the excavations in Ancient Olympia.  He would eventually meet Heinrich Schliemann, of the Troy excavations, and took up Schliemann’s work after his death. During his research, Dorpfeld deduced that the island of Lefkada must have been Homer’s Ithaca

Treasures from tombs in Nirikos, Nidri, Hirospilia and Evgiros are also on display and present the story of the island’s history, dynamics, economy and activities of its inhabitants of ancient times.

Next stop in your cultural adventure is the one-of-a-kind Phonograph Museum, located quite close to the main street of the old town.  The Museum was the brainchild of collector Dimitris Ntelimaris (Katopodis) and started from his own private collection.

From phonographs to rare gramophone records, even cameras and unpublished black and white photographs (including photos of Aristotle Onassis and Maria Callas), an amazing array of artifacts have been amassed by the founder.

Also in the collection are rare manuscripts and the diary of Aristotle Valaoritis. Valaoritis is one of two noted poets born in Lefkada, the other being Angelos Sikelianos, both of whom can be credited with Lefkada being known as the “island of the poets”.

Museum entrance is free, but small donations are always welcome. CDs with old Greek songs are also available for sale and support this notable effort and the “meraki” of people who have endeavored to create and maintain this unique place!

Apart from the exceptional blue beaches and the rich natural beauty, Lefkada has an interesting cultural history. In a neo-classical mansion standing on of the stone alleys of Lefkada town visitors will find the Orpheus Folklore Museum. Upon passing through the heavy wooden doors, visitors will find themselves in a place reminiscent of  life in a bygone era. The museum offers a wide range of exhibits regarding authentic objects of everyday life of people in Lefkada, with some of them dating back to the late19th century.

The museum was founded in 1978 from the Council of the Musical and Literary Association “Orpheus”, a group which was formed in 1937. Their aim was to preserve the objects (tools, textiles, paintings, etc.) that people began to toss in order to make way for “shiny” modern products. The group collected and sorted “artifacts” that villagers throughout Lefkada threw away. Eventually their efforts to preserve the past were recognized and they began to accept donations that enriched their collections.  With the assistance of the with the help of the Lefkadian Studies Organization. Today, the Museum hosts over a thousand folkloric and traditional objects representative of  rural life in a time gone by, as well as a collection of handcrafted art pieces.

Open: Tuesday through Sunday in April through October

Open: Sundays from November through March

The Folklore Museum of Lefkadian Embroidery

When it comes to the role of handcrafted art in the history of Modern Greece, embroidery undoubtedly plays a significant part. The Folklore Museum of Lefkadian Embroidery in the village of Karya is a small private museum where visitors can take in the complex skill and art of local embroidery.

At the end of the 19th century, Maria “Koutsochero” founded a school where she taught young girls of the village the art of embroidery. According to local stories, she had lost her hand in an accident at a very young age ( Koutsochero means “the one with the crippled hand”). Her disability did not stop her from developing and perfecting “carsanican” stitching an extremely complicated art of embroidery. She taught this technique and soon the village of Karya became famous for this type of embroidery and the exceptional skills of its creators.

The Museum has an impressive collection of these embroidered art pieces on display.  And what would embroidery be without the thread? Visitors can learn (and see!) how flax was transformed into thread and fabric.

The last jewel in the treasure hunt of Lefkada is located in Frini, approximately 2.5 miles away from the town of Lefkada – the Ecclesiastical Museum – where church art and traditions have been preserved, dating back to the second Ottoman occupation (1479-1684) and  into the period when Lefkada was integrated into the Modern Greek state (1864).  The Museum is located in the Panagia Faneromeni Monastery – Panagia Faneromeni is the patron saint of the island.

According to legend, the first bishop of Lefkada, Sosion, founded the Monastery.  He was a student of the Apostle Paul sent to preach Christianity. The Monastery/Museum itself is a piece of living history – from its founding and visitors, to design and reconstructions influenced both Venetian and Zante styles – and to the countless manuscripts, icons and artifacts contained within its walls, a rich selection documenting four centuries.