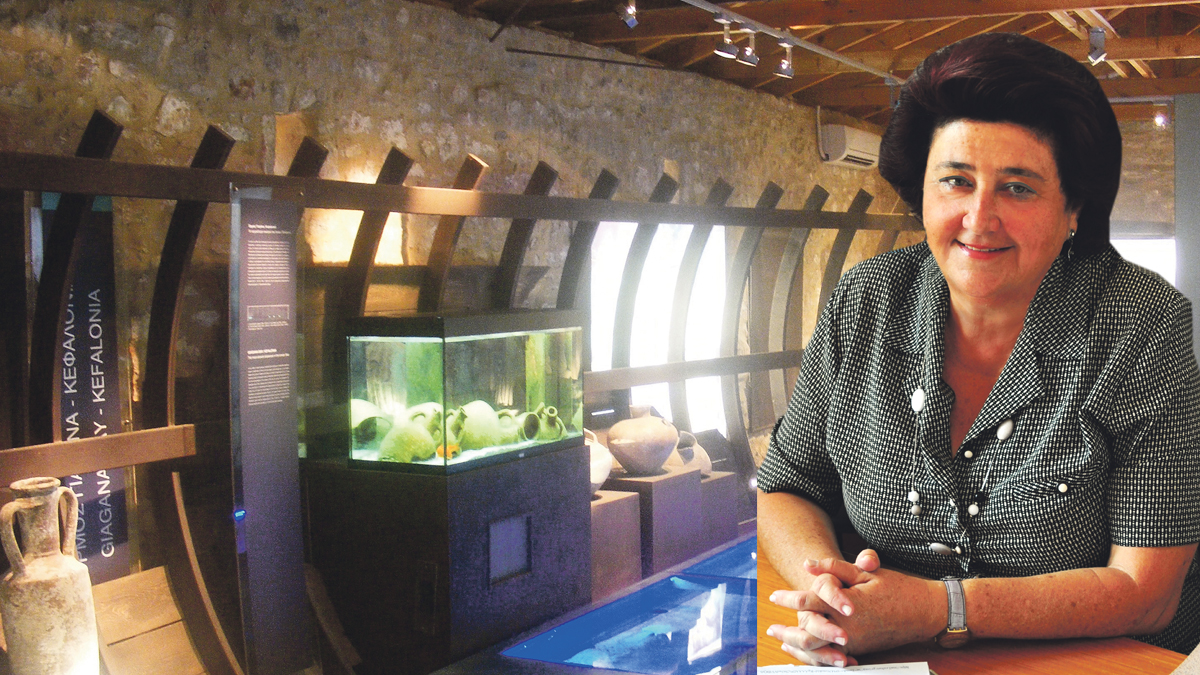 The Ephorate of Underwater Antiquities (EUA) is a Special Service of the Hellenic Ministry of Culture & Sportsunder the direction of Dr. Angeliki Simosi. Founded in 1976, its objective is the protection of the underwater antiquities.

This year, the Ephorate of Underwater Antiquities celebrates its 40th anniversary and Politismos had the great privilege to speak with its director, Dr. Angeliki Simosi.

The EUA has a wide array of responsibilities, including research, care, conservation and preservation of underwater antiquitiess as well as the supervision of projects by various maritime and oceanographic institutions or organizations and promotion of deemed underwater archaeological sites.

Q. Your professional path and contribution in the field of Underwater Archaeology has inextricably connected your name with the Ephorate of Underwater Antiquities. What led you to this particular field of study and career?

To tell you the truth, I did not choose to get involved, the Ephorate chose me. At the time, when I was 26 years old, the Ephorate would recruit young archaeologists to teach them diving and so I found myself here.

Today, even if I had many lives to live, I would still choose the same path. I could not see myself pursuing a different career because after all these years this is the only thing I know how to do.

Q. For those who may not be familiar with the vital role Underwater Archaeology plays in shaping history, how would you explain the extent and necessity of this science?

I would explain it this way; in regions all over Greece terrestrial (land) excavations have taken place over the years and the field of Terrestrial Archaeology is now in an advanced state, which means that the land has been explored in a large scale whereas the sea still keeps many wonders unexplored. What I mean is that nowadays, Underwater Archaeology is the field that still brings new evidence to light which has been previously unknown.

While the Ephorate of Underwater Antiquities has been active for 40 years, it has not been offered the appropriate aid and support by the Ministry of Culture. It is now my personal goal, and struggle, to promote the work and importance of Underwater Archaeology.

The capstone of our effort will be the creation of the Museum of Underwater Antiquities, which would host maritime findings of the past 40 years. The Museum collections would open the gates for the public to admire the underwater world and better understand its significance. As of now, the Bronze statue of a rider wearing a cuirass – which was caught in fishing nets in the marine area of Kalymnos island – is on display at the Acropolis Museum.

Q. For the time being, where can findings of Underwater Archaeology of Greece be seen?

Exhibitions are currently available at our two museums in Pylos, Messinia, including the Tsiklitiras’ house, which is home to the French collection Rene Puaux on the Battle of Navarino.

Q. Considering the history and underwater wealth of the country, Maritime Archaeology appears to be leading in global interest. Partnerships with foreign institutions, universities and aspiring archaeologists are typical in your field. What are some institutions that you collaborate with?

We partner with almost every foreign Archaeology School within Greece; to name a few, the French School (EfA) and the British Archaeological School (BSA) as well as the Norwegian, Danish and Finnish Institutes of Archaeology and Netherlands Institute at Athens (NIA).

There is a broad range of foreign universities and institutes that we already work with. As of late, Chinese Institutes of Archaeology have expressed interest in partnership, as the Chinese are avid explorers of the underwater world. In fact, in Beijing there is a remarkable Center of Underwater Antiquities.

A partnership with the Chinese could be a great opportunity for Greek Underwater Archaeology and support for the foundation of our museum plans. A potential collaboration with Chinese Institutes would be highly beneficial and I have I visited Beijing in order to develop strong professional relations.

Q. Many discoveries by the Ephorate are leading stories reported in Greek media. However, is there a particular project of interest that may not yet have made headlines?

We have collaborated with the National Research Center and this year we teamed up with the French School of Archaeology; I hope to join both forces for more focused research and results. I also hope to bring more attention to the work we have been doing for two years on the island of Fournoi (Delos) where we have already found 45 shipwrecks!

Q. For young people interested in the field of Maritime Archaeology, where might they be able to study in Greece?

Firstly, there is a department at the University of the Peloponnese for Underwater Archaeology.

I believe that the preservation of the maritime cultural legacy is crucial. I am greatly concerned about what will happen once the current Ephorate team retires. The Ephorate of Underwater Antiquities needs young people who have interest and passion for the field, who want to be the successors of our work and will carry on our efforts. I believe this strong and personally do whatever is possible to help young people who want to get involved in this field.

Q. It is the 40 year anniversary of the Ephorate of Underwater Antiquities. 40 years of research which have brought to light rare findings of great significance to Greece. What are your thoughts on the first four decades, and what do you imagine for the next 40?

I have been with the Ephorate since 1983 and will remain as Director for another seven years. I think that, so far, our first 40 years have been very positive!

What I hope for the future is that the interest for underwater archaeology will increase and enthusiastic young people will take the reins after my generation has retired. I hope that young professionals will promote the important work and effort taking place at the Ephorate and that they will love this field as much as we did. n

To learn more about the Ephorate of Underwater Antiquities, visit: