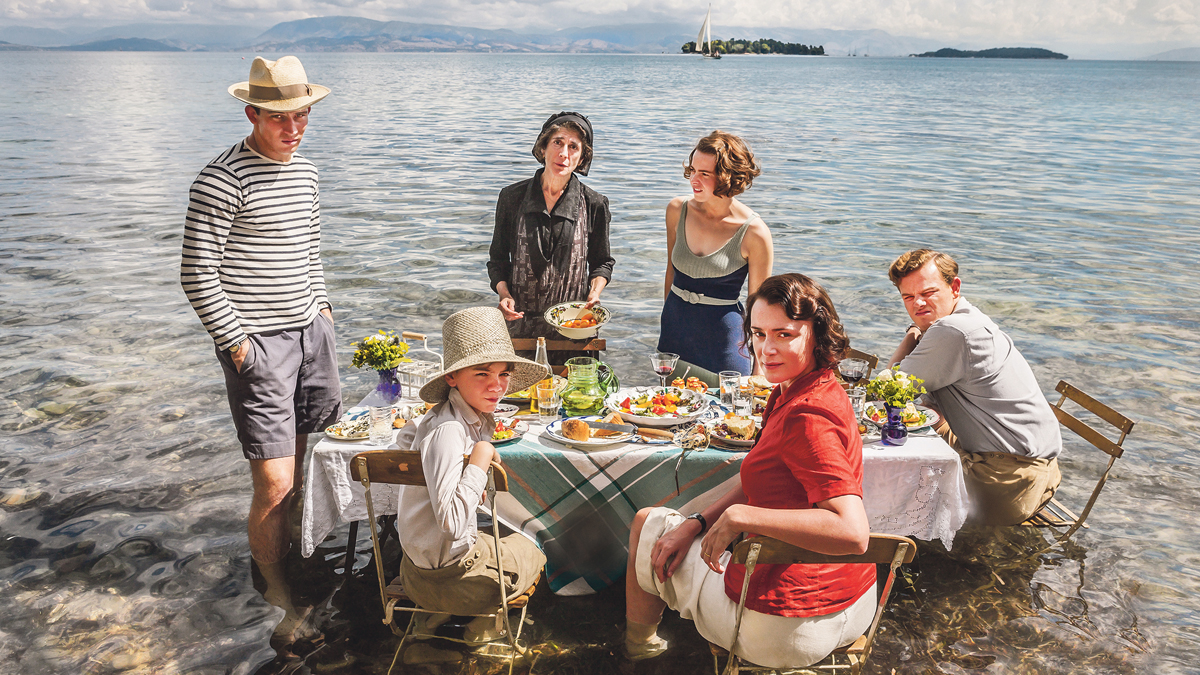 One of the first things I did when my niece was born 3 years ago was to compile a list of my absolute favorite children books; I’m hoping to start crossing several items off in years to come and be blessed with the opportunity to read some of them with her. “The Corfu Trilogy” is right in there, with “My Family & Other Animals” in the top rows, while my personal favorite of the three, “Birds, Beasts & Relatives”, follows right up.

The Durrells in Corfu, based on Gerald Durrell’s warm and witty novels, aired in the UK in April 2016 and captured large audiences. The story focuses on the widowed and almost broke Louisa Durrell (played by Keeley Hawes) whose life is in meltdown. Her four children, Larry, 21 (Josh O’Connor), a would-be novelist but currently unaccomplished estate agent, Gerry, 11 (Milo Parker), obsessed with animals and about to be thrown out of school, and the middle two, Leslie, 18 (Callum Woodhouse) and Margo, 17 (Daisy Waterstone) at the verge of adulthood, are the main reason why she decides to brave a scenic but challenging reality in Corfu of 1935. I’ve had the opportunity to interview producer Christopher Hall for Politismos and get his unique perspectives on all things Durrells!

Q. The show was a huge success in the UK, hitting a record number of 6,500,000 viewers (for the first time since 2014) and is being compared to Downton Abbey. Did you expect it to be that successful and what is it that you think attracted the audience?

Well it was the biggest new launch for ITV, the commercial broadcaster in the UK, for many-many years. They are the same broadcaster that aired Downton Abbey and they were actually looking for a replacement. We’re definitely different, we’re much more of a family show than Downton Abbey, and we get out at eight o’clock in the evening, not nine o’clock. That was a huge success for the broadcaster, because it captured a very big audience and then they kept that audience for the whole evening so they could have a lot of advertisements.

Did I expect it to be that kind of a success? I hoped it would be! Because I think that if something appeals to you personally, hopefully then other people will like it. It’s a show that is about family, about a particular, slightly eccentric family, who decide to immigrate to Corfu and there are all the things that are interesting and important in a family, that we all in our own families experience: there’s passion, there’s cheer, there’s humor, there’s a kind of cruelty, but at the bottom of it all there’s an enormous kind of love, between all family members.

Coupled with that we have the works of Gerald Durrell as a naturalist, as portrayed in “The Corfu Trilogy”, in “My Family & Other Animals”, (and two volumes), so we have the influence of animals which are enormously attractive and then of course Corfu itself, a beautiful island, which is green, has a gorgeous sea and beautiful skies, glorious sun and wonderful people. So there are all the elements that people seem to respond to positively.

Q. I understand that both the villas where the family had stayed in real life, Villa Anemoyanni in Kontokali and the “White House” fisherman’s cottage in Kalami, were important locations for the narrative. Did you get to shoot at these exact same places? Which other locations did you shoot at? What were your criteria in choosing these locations?

Well the original Durrell villas, one’s been turned into a hotel and the other has been demolished. However, we’ve filmed in a lot of houses that the Durrells visited. For instance, in the new series, series 2, which we’re just filming at the moment, we filmed in a house where the family had a tiger’s skin on the wall and Gerald Durrell did not approve of this, because he didn’t believe an animal should be shot and its skin be hang on a wall.

Q. The Durrells are very much in the atmosphere of the island, if you go to a bar you can see them in old pictures, you can meet old people who knew them, the relatives of Spiros Amerikanos (Halikiopoulos) are still on the island, there’s a Durrells’ Society, and a garden in Corfu Town dedicated to them… So, although they were only on the island for a length of time of about four years, from 1935 to 1939, their “ghost” is still very much there. Both Laurence and Gerald Durrell wrote extensively about the island so they have a very strong legacy.

We obviously need locations that work for 1935, for example a few weeks ago we were filming in a beautiful old olive press, which was exactly the same as olive presses were a hundred years ago. So we have some very good locations to consider throughout the course of looking out for possible filming areas. You know there’s a great source: the beautiful, old Venetian architecture of the island and what I call “the natural architecture”, the architecture of farmers and shepherds as well as Corfu town, which is of course a heritage gold mine!

Q. Generally speaking, were there any challenges/limitations when filming in Corfu? For example, were the authorities and locals helpful? Is there anything you think you could be facilitated with that would make this -or any other series production- better?

It’s very rare for us to find that we’re not welcome somewhere…. The Greek authorities “made the right noises”, can I say? There’s not much “tangible” help but things have gotten easier. For example, there was a recent ruling and we don’t have to go through the Department of Archaeology all the time to get permission for filming. Also the mayor’s office was very supportive of us.

Obviously, Corfu is an island and has an island economy that is mainly geared towards tourism. We’ve got very good support and help from the Athenian filmmaking community and we also work with a local production company called Corfu Productions and they provide us with anything and everything we need, but things obviously have to come in from the mainland. I don’t expect to find sophisticated filming equipment or people who have particular skills associated to filmmaking to be residing in Corfu…

The thing is, we are actually happy to help Corfu in return! I mean, the people of Corfu are obviously helping us, but the fact that we have a hit television show that is playing now all around the world, I believe it’s already having a profound effect on the visitor numbers in Corfu. I believe that the British visitor numbers are up by 50% this year. They will be followed by Australians, New Zealanders, Americans… the whole world is being shown around the island. The whole world that was not aware of Corfu before will become aware of it now and we want to photograph the island in a way that will make its beauty obvious.

Q. How have the Greek surroundings helped the characters grow? In what ways?

It clearly helped the actors. When we were filming the first series, it was close to the time of the possible “Grexit”, the most severe crisis that you were going through politically and economically, and we were actually considering the possibility of having to shoot somewhere else. Of course if we had done that, it wouldn’t have been the real place and there are so many positive effects from filming in the real place and working with the real people, smelling the air, seeing the vegetation, the animals, the architecture… there are so many positive aspects that come from being in Corfu itself which are then assimilated by the actors who are playing the characters.

The other thing we did, which I’m very proud of, is that in almost every case possible, we used Greek actors to play Greeks. You see, this story has been done a number of times before by the BBC, and every time the BBC attempted “My Family & Other Animals”, they would use actors who weren’t Greeks to play Greeks, so for example Spiros would be an Englishman who would have to do the accent. So one of the things I’m particularly proud of is that Theodore Stephanides, Spiros Amerikanos, even the maid in the family, Lugaretzia, those are all Greek actors and that’s been a great choice. They’re all great acting talents and it’s lovely to be able to employ them and use them in our production. I don’t think that at this day and age, and I feel very strongly about this, it’s excusable to not be authentic, like they did in the old times, when for example they had a black character and they would use a white person and paint them black! Using the real people is, in a way, valuable “equipment”.

Q. The main character, Louisa, has been perceived by the audience as a matriarchal figure. Is she really one? Her kids seem to think she needs a man when they try some match-making and there are male characters like Spiros, the taxi-driver, who takes care of several of the family’s every-day problems, and doctor Stephanides, who mentors Gerald and is a prominent father-figure, who may suggest otherwise… Were you trying to portray a matriarch or a damsel in distress? A little bit of both?

Well, I love that you’re bringing this up! There’s a difference from the book and from other adaptations because we’ve made the mother the central figure. And what we’re doing there is that we’re depicting, even though actually in 1935, a modern woman, a woman who is a single parent, who’s battling on her own, with not very much support. We’ve made a strong woman, but also one who is interesting because she’s fallible, because things are thrown her way all the time and she has to react to them. In a lot of these other adaptations, there’s basically Gerald Durrell looking at the natural world and his family and he can see his family is just another example of different animals. And obviously that is part of our theory but, it is much more about Louisa having made this rather revolutionary step of setting off to Corfu at a time long before Easy Jet!

Q. So who is your favorite Greek character and why?

Well my favorite one actually is Theodore Stephanides! Part of it is because I also love Yorgos Karamihos who plays him (as I do all the Greek actors!). A remarkable man, who was a real man, but also the fictional depiction of him, I find, has an interesting tension. He’s a very charming character in his affection and enthusiasm for knowledge and culture; to me he’s very interesting.

Q. Lastly, I just want to say that I hope the series continues to do well and make people excited and interested in Corfu, in the Durrells, and in all things connected with them!

The first series (of 6 episodes) just aired, in October, in the U.S. on PBS MASTERPIECE and series 2, is currently being filmed in Corfu and the UK.