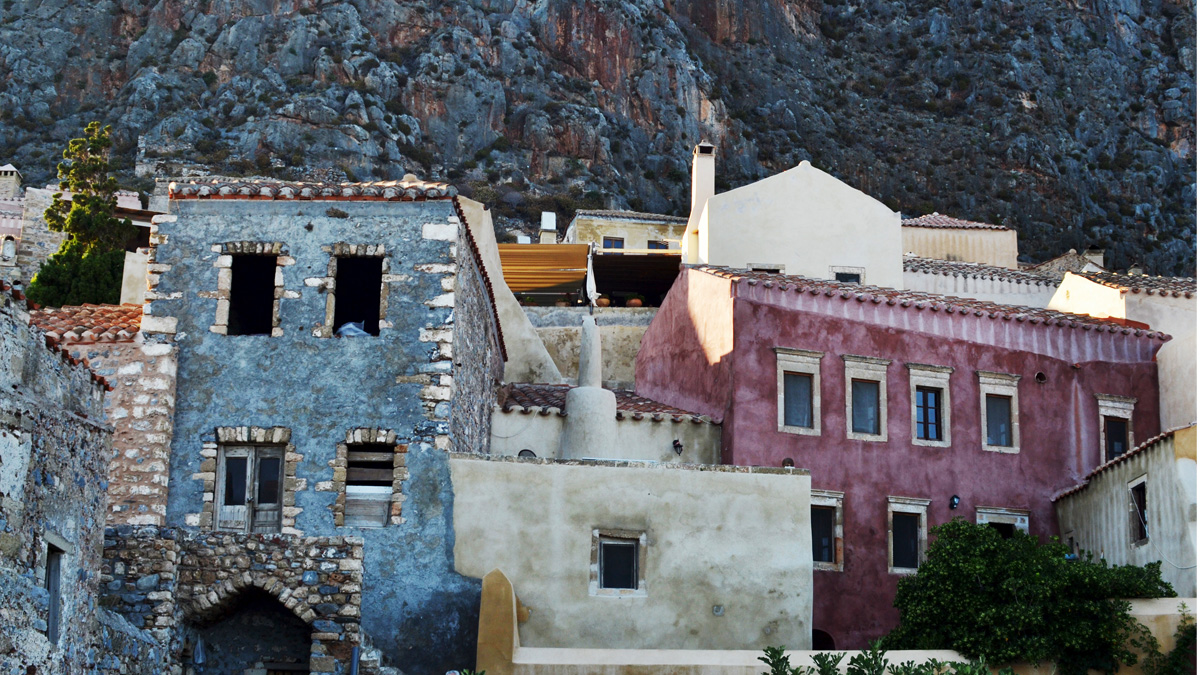 The Castle of Monemvasia: Where History Comes Alive

The first autumn breeze had made its appearance in Athens and we were already loading our luggage into the car… destination, Monemvasia. Many times I had heard about the famous “Castle of the Peloponnese” – the “Gibraltar of the East” – as it was once called. I had never had the chance to visit this magic place until now…

After four hours of driving through highways and twisty rural roads, the landscape began to change. The small villages gave way to steep hills as the sun shined above us.

Finally, after the last turn, the castle town of Monemvasia rose above the Laconian coastline. A single piece of dark rock was standing haughtily, surrounded by the deep blue waters of the Aegean. With just a single causeway connecting the rock to the mainland, this town served as the mightiest fortress during the Middle Ages. It seemed appropriate that our CD player was now playing “The King Will Come” from Wishbone Ash, adding a chivalrous sense to the already medieval scenery.

The Byzantine Castle town of Monemvasia is entirely carved into the back side of the rock, making it completely invisible from the mainland. Many inhabited the rock through the ages because of its geostrategic significance. It is said that the first residents were Lacedaemonian noblemen who found protection there against Avar and Visigoth raids during the 6th century AD. The first settlement was built on the top of the rock – now called Upper Town – and gradually expanded down into the lower regions. Lacedaemonians were also the first to build a large bridge that connected the settlement with the mainland. To this bridge the town owes the name Monemvasia (“moni” emvasis” which means single entrance).

We had already parked (cars are not allowed in the castle) and were now waiting in front of the main gate for the hotel staff who would help us find our rooms. A gate that, besides repelling intruders, had not allowed time to pass through its doors either. Anyone who visits here for the first time will not be fully prepared for what will be experienced. A trip to Monemvasia is a trip back in time. In the Castle, history comes to life; and it can be seen in every corner, in every single rock.

The Castle town of Monemvasia entered its golden era during the Byzantine Empire, particularly between the 12th and 14th centuries AD. Numerous orthodox churches were built at that time, while the fortification of the town became much stronger. The great number of historical churches and monasteries (there are over 40), bear witness to a long religious tradition in Monemvasia.

Due to its strategic position, the town was declared by the Byzantine Empire an administrative center for Peloponnese. Many emperors and conquerors wanted the town for themselves, and after more than 40 years of battle, the castle fell to the Franks in 1251.  Soon enough though, the Byzantine Empire recovered and re-conquered Monemvasia.  The town would benefit from many administrative and economic privileges thereafter, and its residents developed a strong trade practice. Most were sailors and traders exporting goods such as wine, oil and leather.

In the 15th century AD, when Greece fell to the Ottomans, Monemvasia was the last Byzantine fortress to fall in 1463.  And on July 23, 1821, it was the first fortress to be liberated by Greek resistance fighters who sought liberation for their country.

After we settled in, our wandering through the town alleys began. Monemvasia wholly deserves to be characterized as one of the most well preserved medieval towns in Greece. The old mansions, churches and narrow cobblestone streets have all retained their byzantine architecture and elegance. The same can be said for the various guesthouses and shops in the settlement. Stone walls, heavy furniture and carved fireplaces added to the ambiance of our stay, creating a unique experience.

The main thoroughfare, a narrow cobbled byzantine street, begins from the main gate of the lower town and leads to the central square. This road was once the center of all trading activity and nowadays is the center of most of the town’s shops and restaurants. In the central square lies the old canon and the town cathedral, the Church of Elkomenos Christos which was built between the 6th and 7th centuries AD. Opposite the church is a 16th century Ottoman building that today houses the largest archaeological collection of Monemvasia.

From the main street, a number of smaller striking cobblestone streets spread out leading either upwards or down to the seaside. Despite the autumn weather, many people were swimming in the cool waters of Myrtoan Sea, while there were others who sat on the old walls enjoying the company of a good book.

The first thing to consider when visiting the Castle is to simply wander about without any particular plan or destination. The entire town is a museum in itself. Visitors need only to get lost in the heart of the town; here is where the castle will reveal its well kept secrets. Take a stroll down by the sea and gaze at the waves crashing on the old city walls or perhaps take a moment to admire the beauty of the blooming bougainvilleas that await you every corner.

Stop into one of the many churches that prevail between the old stone mansions, enjoy a few moments of serenity when the sun begins, and then find your way into one of the traditional local taverns to enjoy a glass of Malvasia wine. Malvasia wine was very popular during the Middle Ages and Renaissance. The name Malvasia was the name given by the Franks to the Byzantine town of Monemvasia and to its wine.

Some locals told us about a hiking route that begins at the lighthouse at the end of the town and circles the whole rock. It is a “medium difficulty” hike (about 50 minutes) that everyone should try.  The path will take you through an untouched nature landscape of unique beauty. And as you stand there, to your left you’ll find the site of steep dark rock and to your right, the wild windy sea.

“The rock. Nothing else. The wild

fig tree and the iron rock.

scarlet scarlet into the black.”

This prose was written in 1974 by the great poet Yiannis Ritsos. Upon entering the central gates of Monemvasia, you will see the statue raised in his honor – Ritsos gazing at the sea from his beloved birthplace.

But the sightseeing does not stop inside the castle. Nature lovers can find plenty of outdoor activities, including wind surfing, hiking, scuba diving and sailing. Monemvasia has been preserved and is registered by the European Ecological Network, NATURA.  Visitors should be sure to visit the Petrified Forest of Aghios Nikolaos. The Forest is a actually a part of the Aegean Geological Monument and a natural geological museum that contains fossilized trunks that date back about two to three million years.

Kastania Cave is another excellent choice for visitors.  Its surface covers 1,500 square meters separated into two levels and visitors are guided along a 500 meter route. The cave is classified as second of its kind in Europe due to its composition, rich density and variety of shapes, colors and figures. The cave was formed from limestone in the Jurassic age (195-145 million years old) as a result of geological and chemical reaction. It took nature millions of years to create this fantasy-scape of beauty. Visitors can admire various impressive formations such as discs, flat stalagmite, eccentrite and elictite.

Sunday soon arrived and it was time for us to leave.

Three days simply were not enough for us to explore all the wonderful places this land has to offer. Leaving this place, I added to my suitcase something extra, something special – a new experience from a land where the past vividly interacts with the present.

An old mansion that was once the Ritsos family country house for more than 100 years. In 1930, the family moved to Athens and the mansion became a traditional olive oil mill until 1962. Today it is a museum where visitors can see vintage machines and learn about the traditional methods of producing extra virgin olive oil.  On the upper floor, you will also find a poetry section where you can read (in Greek and English) from a vast collection of Yiannis Ritsos poems.

The Church of Elkomenos Christos:

A basilica with a cupola, three semi-circular arches to the east and a domed narthex to the west.  This church is the Castle’s cathedral. The current architectural design is the result of alterations throughout time, but the original structure most likely dates back to the Early Christian period (6th-7th centuries AD).

The Castle of Movemvasia is accessible all year. Most people visit in summer, but an ideal period for visiting is spring or autumn. During these seasons, and even winter, visitors can avoid overcrowded roads while also enjoying lower priced accommodations.

Vehicles are not allowed inside the Castle. Since all exploring is covered on foot, a pair of comfortable shoes is recommended.

Easter in Monemvasia is a unique and mystical experience. The residents preserve a long religious tradition and celebrate every year with great reverence. All Easter services are held in the Church of Elkomenos Christos with hymns echoing throughout the cliffs.