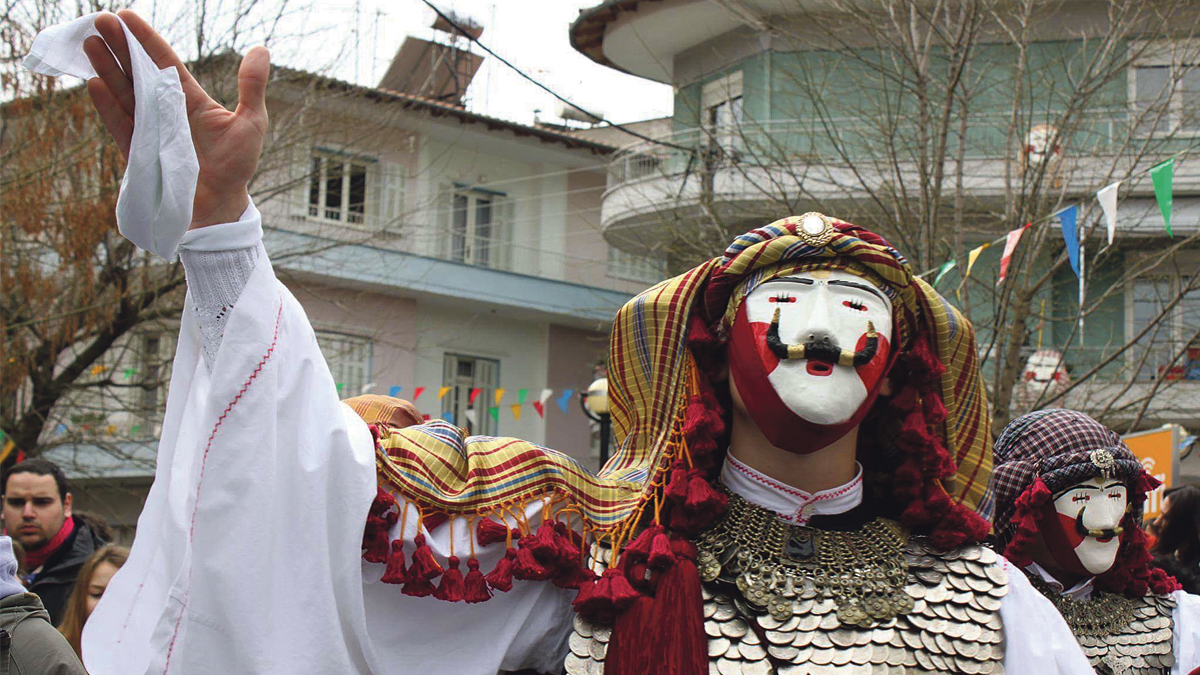 The Carnival Traditions of Greece

Our world is full of unique identities and cultures, each defined by distinctive languages, religions, customs, and traditions. But around this time of year, people gather in all corners of the world to take part in the excitement of a well known and shared tradition called “Carnival.”

Carnival, known also as Mardi Gras or Apokries, is a festive season full of music, dancing, parades and spirited parties. In the Roman Catholic and Christian Orthodox churches, Mardi Gras and Apokries refer to the period just before the 40 days of Lent prior to the Holy Resurrection.  Today though, no matter a person’s faith, origin or language, Carnival has become a much-anticipated season of celebration when people have the chance to dress up in costumes and forget about their every day problems.

Widely celebrated in New Orleans, Rio de Janeiro, Venice, and Greece, the international character of the festival is unmistakable. But what is the history behind this annually-celebrated festivity? A retrospective look at the festival’s origins harkens back to ancient history with ties to traditions like the pagan Saturnalian festival of ancient Rome and the festival of the Great Dionysia in ancient Greece.

The ancient Greeks celebrated the Great Dionysia, a large festival held in honor of Dionysus, the god of wine and fertility, around the sixth century BCE. They held the festival during the months of March and April as a celebration of the end of winter, a celebration of the passage from darkness to light. According to mythology, the worshipers of Dionysus would put on crowns made of ivy leaves, wear masks and dress in animal fur. While disguised, they would drink wine until dizzy, sing loudly, and dance to honor their god.

The revival of this ancient tradition acquired its current festive character from the 16th century, when many regions of Greece were under Venetian occupation. The festival has had a long presence in Greek history: first as the Great Dionysia and then as Carnival (Apokries, in Greek).

Understanding the origins of the festival, one must also examine the root of the word Carnival. Although its derivation is obscure, the name is linked to the Latin expression carnem levare or carnelevarium which means “farewell to meat (or flesh).” The Greek word equivalent to Carnival, Απόκριες (Apokries), has the same meaning “refrain from meat.” The meaning is quite logical given it is the final festivity before the beginning of Lent, the 40 day period of fasting before Easter Sunday.

As Easter is an annually movable feast, so is Carnival. In Greece, the beginning of the Carnival season for the year 2016 commenced on February 21 with the opening of the Triodion, a book containing three sacred odes. The festival season lasts for three weeks, with the Carnival period coming to a climax on Clean Monday, March 14. According to tradition, during the first two weeks of the Carnival season, people can consume all the meat in the house so that they prepare themselves for the fasting period.

Eleven days before the commencement of Lent is the celebration of Tsiknopempti, widely known as Smoke Thursday. The day is called Smoke or Burnt Thursday since participants traditionally grill all the meats consumed during Tsiknopempti. During this day, which fell on March 3 this year, families and friends frequently gather to eat and celebrate in taverns and restaurants. The weekend following Smoke Thursday is also part of the festivities as it is typically the last day people are allowed to eat meat. The second Sunday of the Carnival season is called “Meat-eating” or “Tis Apokreo” (“Της Απόκρεω”) in Greek.

During the third and last week of the Carnival season, Orthodox people are not allowed to consume meat products, but they may eat cheese, butter and egg products. The last Sunday of the season, March 13 this year, is called “Cheese Fare Sunday,” “Tis Tyrofagou,” or “Tyrini.” As meat is not allowed at this time, people traditionally eat spaghetti on this day. There is a special story behind this tradition; spaghetti, also called macaroni, derives from the Greek words macarios (blessed) and aionios (eternal), and thus means eternally blessed. The preceding day, Saturday is called “Psychosavvato” (the Saturday of Souls), the day when we honor the dead. The religious ritual includes making grain dishes, or kolyva, which coincides with the macaroni being served on Sunday.

The next day is Clean Monday (Kathari Deftera), the first day of Lent (Sarakosti). It is the first day of a forty-day period when the faithful are not allowed to consume meat, fish, dairy products, and eggs. Instead, they consume “pure” products as a means of cleansing their bodies and souls in preparation for the Holy Resurrection. However, in Greece, not all the Christian Orthodox people observe Lent; it is most common for people to fast during only the last week of the Lent, known as Holy Week.

Clean Monday possesses an atmosphere of festivity and celebration. The dishes usually served at the family table are cuttlefish, squid, fish roe salad, shellfish, halva, and “Lagana,” which is a flat unleavened bread consumed only on that day. Traditionally, families with young children will venture out on a picnic escape to the countryside and fly kites on Clean Monday as well.

The Carnival period, which coincides with the beginning of spring, makes for a truly magical vacation experience in Greece. The diverse local customs and traditions throughout Greece are an undeniable attraction to both Greek and foreign visitors. We invite you to experience Carnival season in Greece!

The Patras carnival is the largest carnival celebration in Greece and one of the most renowned in Europe. With a history of more than 180 years, visitors should experience the Patras parade organized by the locals! Each year, during the last two Sundays of Carnival, Carnival floats, decorated cars, and colorful papier-mâché figures fill the city streets. The Carnival King and Queen lead a parade of thousands of disguised Carnival-goers. There is even a children’s Carnival, where young children dress up in fancy costumes and take part in the festivities. In addition to the parade, visitors can also take part in treasure hunt games and contests as well as watch street theatre performances and musical events.

One of the main events of the Patras carnival is the night parade, called “nychterini podarati” (“νυχτερινή ποδαράτη”), which takes place on the last Saturday night of the festive period. The only float to participate in the night parade is the Carnival King’s, while festival-goers dance and march in the streets holding torches. The parade is called “podaratim,” which mean “on foot” because the Carnival-goers walk through the streets of the city.

The last day of the festival is for the closing ceremony. The highlight event is the burning of the float of the Carnival King in the port of Patras. Carnival participants fill the streets and walk to the harbor to watch the burning float, which symbolizes the end to Carnival. The night ends with the Mayor of the city giving the signal for next year’s carnival!

The Carnival of Xanthi offers visitors an unforgettable experience and flavor of tradition and folklore. Besides the typical float parade, in Xanthi, visitors have the chance to participate in the traditional Folk Parade. Folk dance groups dance to the rhythm of Thrace music, while more than 40 cultural associations welcome guests with wine and local delicacies.

While the main attraction is the reenactment of old customs, the Carnival of Xanthi also hosts a variety of other activities, events, and exhibitions. For example, “the burning of Tzaros” (To kapsimo tou tzarou) is a custom worth seeing. With origins from Eastern Thrace, the “burning” is reenacted every year close to the River Kossynthos in Xanthi. “Tzaros” is a human figure placed on top of a pile of deadwood and is burnt in the middle of a square on the last Sunday of the Carnival. According to tradition, burning Tzaros means locals will not have to deal with fleas during the summer months.

The next day, on Clean Monday, the locals from Polisytos village in Xanthi revive the tradition of “daubing” (“moutzouroma”). The custom rises from the traditional bean soup prepared on the last Sunday of the Carnival, usually in fireplaces. On Monday, they welcome visitors at the entrance of the village by daubing them with the ashes on which the soup was cooked. Afterwards, both the villagers and the visitors cover themselves with animal fur, put on bells and walk around the village making as much noise as possible in order to exorcise evil.

The Carnival of Corfu is a unique event worth attending and has a strong resemblance to the Venetian Carnival since the island had long been under Venetian occupation. When visiting Corfu, one will typically attend the Great Parade and the burning of the King’s Carnival float, but the street theatre performances held before are truly a site to see!

The first enactment is called Corfiot Petegoletsa, which means “the Gossip.” Actors sit in windows overlooking the center of the old town and chat in local dialect. From local scandals to political affairs, actors exchange gossip like the old times.  In this street theatre performance, you’ll find out all the news of the town!

Another performance is called “the wedding.” Men of the village gather in one house to help the groom dress while the women gather in another house help the bride. According to the custom, the bride is a  masculine man. There is also a demon, played by another villager who tries to break up the wedding. It is a lively part of the celebration that offers visitors an unforgettable experience!

In the village of Episkepsis, villagers host “the dance of the priests,” a custom which takes place on Tyrofagos Sunday (Cheese-eating Sunday). The village priest leads the dance and other men follow him in order according to their age. It is an event full of dance and music where the local people and the visitors enjoy plenty of food and wine.

On Clean Monday, the villagers of Mesta, Olympoi and Lithi revive the custom of “Agas” through theatre performance. The tradition finds its roots in the time when the Aga (Αγάς), or the Ottoman tax collector, would visit the village to collect taxes in mastica. Now, the local people gather in the main squares where they reenact a court of justice. Villagers are accused of committing crimes and are sentenced by the Pasha, played by an older villager. Folk dance groups of the village interrupt the scene with music and dances. The custom dates back to 1840, making the Aga one of the oldest traditions celebrated in Greece!

Another popular custom taking place on Clean Monday is the “Vlach Wedding,” which resembles the Corfu wedding performance! Both the groom and the bride are roles played by male villagers. The wedding ceremony takes place in the central square, where the visitors and relatives are dressed in traditional costumes.

The revival is reminiscent of a traditional wedding; with much celebration and dancing. In Naoussa, masks are worn by the characters, a long standing art and tradition

The “flour war” of Galaxidi is a custom with a rich history. During the Turkish occupation, the local people of Galaxidi in need of celebrating Carnival decided to use a foodstuff that was commonly found in every home: flour. Villagers went out to the streets to throw flour—“making war,” and dancing into the night. Today the custom is revived every year, with people of every age participating in the festivities!

On the last Sunday of the Carnival, the locals of Livadia organize an event called the Maypole or Gaitanaki. The custom of Gaitanaki dates back to the World War II and is revived annually. People of every age gather at the central square and dance in a circle holding colorful ribbons tied to the top of a long pole in the middle of the circle. As they dance, the ribbons  weave in and out and wrap all around the pole in a colorful and enchanting spectacle!