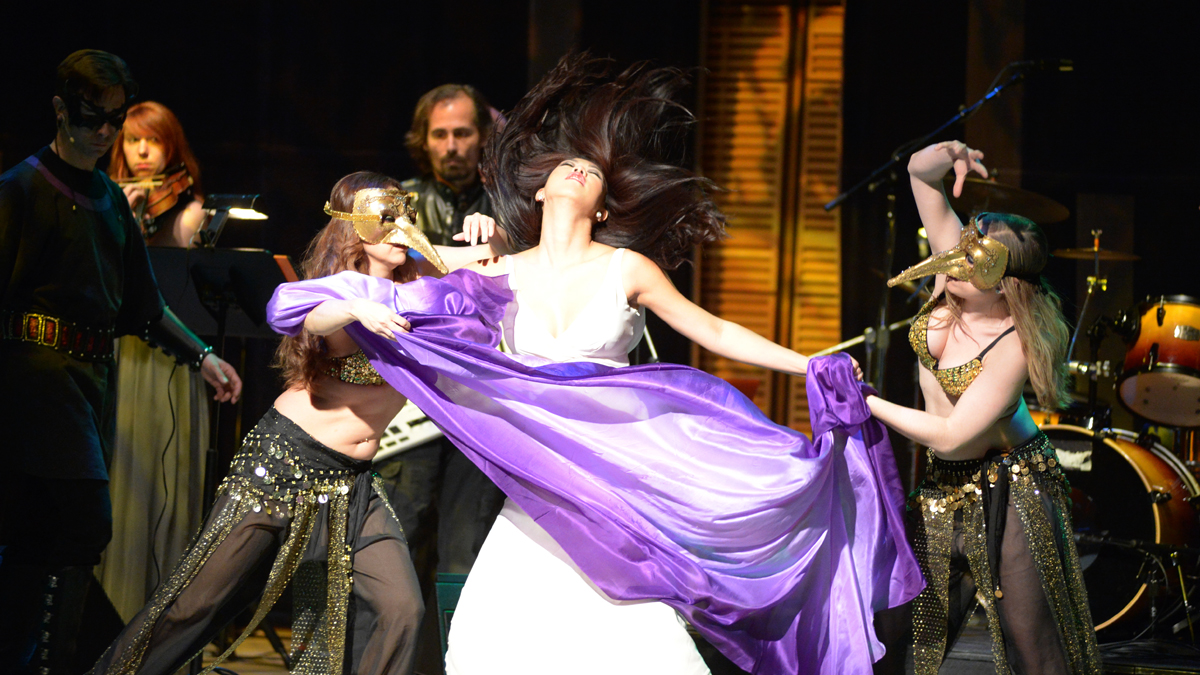 An Interview with Billy Chrissochos, composer of Rock Opera “Anna and Vladimir”

“Anna and Vladimir: The love that ROCKED the world,” debuted at Carnegie Hall and Off Broadway. Set in the year 988 CE, the Heroic Age of Basil II Emperor of Byzantium, the story chronicles Princess Anna Porphyrogenita and her world rocking marriage to Grand Prince Vladimir of the Kievan Rus. An incredible story of Love, War and Peace brought to life through Hard Rock and Greek Folk music, dancing, actors, and a full rock orchestra.

Billy Chrissochos is the primary composer, historical consultant and producer of the “Porphyra, A Grecian Rock Opera Trilogy.” The main production, “Anna and Vladimir: The love that ROCKED the world.” Billy was born in Astoria, New York but grew up in Athens, Greece. There he fell in love with his ancestral culture and Heavy Metal. He eventually fell under the spell of the electric guitar. He set out to create the first ever Greek inspired Rock Opera based on themes from the Macedonian dynasties of ancient and medieval Greece.

In addition to spending some time with Politismos for this interview, Billy Chrissochos has also produced an online lecutre which can be seen by visiting http://politismosmuseum.org/en/resources/lectures.

Tell us a bit about what inspired you to create Porphyra and write Anna and Vladimir? You’ve brought two very different worlds together through this production.

I always had a love for Alexander the Great, the Hellenistic Age and Byzantine History. My dream for a long time was to bring alive the world of Basil II the Bulgarslayer. Ever since I read about him in Penelope Delta’s book “In the Heroic Age of Basil II, Emperor of Byzantium” as a little kid, I was hooked.

I also love Russian and Balkan history and studied “the Russian Primary Chronicle” in school as well. Once we begin to understand that our medieval history is shared through the prism of Byzantium and Constantinople and Greek Orthodox Christianity then our worlds do not seem that different. The Greek and Russian/Slavic worlds are both unique but there is a mutual cultural connection there as well. And it begins during this period of Basil II and Byzantium’s Macedonian Dynasty.

My trips to Serbia, Greece, Russia and Turkey also influenced me extensively with the rich histories of those lands that are all sort of intertwined, with ancient Greek or Greek Byzantine foundations, upon closer inspection. In Russia, I traveled with my film partner George Selinsky who we worked on an a Pan-Balkan action, adventure comedy called Attila Atacks and still work together on promoting Anna and Vladimir to Russia.

How long did it take you to compose the Rock Opera? What challenges did you face through the process?

After I initiated Porphyra’s first album, Faith, Struggle, Victory,” I created a frame work of the world I wanted through the music and also through the artwork. The artwork took me as long or longer to conceptualize as the music, interestingly enough; The album covert art and sleeve. These images became part of the look of the production. The music and art took about a year. The rehearsals prior to recording the album took another year because we had to find the right musicians.

So preparation and creation of the music took two years. The rehearsals for Carnegie Hall which was our debut took six months. We were the first electric Greek themed Rock opera to ever debut there and the folowing year we debuted Off Broadway at The Player’s Theatre. The challenges were immense.

We self funded a lot of the show, we had sponsors, friends, family and fans that chipped in as well. Overall we worked with some very talented people that believed in the story. We had a great Dance Group, called the Dena Stevens Shazadi Dance Project, that we collaberated with. Great musicians that became good friends like my co-guitarist and tzoura player Mike “Risko” Savvas and our singer Elaine Tuttle. Our percussionist Richard Khuzami and our now drummer which we met a bit later Tracey “Tre” Beavers. Also our principal Dancer Peishan Lo was very critical in bringing our dance and band worlds together.

How did you choose the story of Porphyra? Did you find things that surprised you during your research?

“Anna and Vladimir: The love that ROCKED the world” is based off my band Porphyra’s two albums, “Faith, Struggle, Victory” and “The Starmaker’s Prophecy.” On the first album I had written an epic called “988 AD: In the Time of Basil II, Emperor of Byzantium” which tells the story of how Vladimir the Great turned to Christianity after falling in love with the Emperor of Constantinople’s sister Anna. He saved the empire from a civil war and united the Kievan Rus with the Greek Empire of Byzantium.

I kept on finding new and interesting tidbits constantly that we later wrote into the Rock Opera. I am the historical consultant as well so it was challenging trying to make things cool and not too nerdy or too factual and boring. My wife Despina, who helped co-produce and run things kept me in check. I also had two Living History organizations that were co-founded by my good friend Peter Giakoumis, called the Alexander the Great Living History Society and the Byzantine Regiment. The second we had created after we co-created my first band Porphyra’s epic music video “Constantinople 1453: on the eve of the fall.” We had created the costumes and gained a huge cult following.

How can people see the show now? Are there any future tour plans?

We are currently seeking investors to take the show to other theaters. There is also interest in bringing the show overseas to Cyprus and Russia as well.

What was the best response you received from this production? What was the most surprising response received?

Our production is a Byzantine tale but it also the tale of Macedonia. So people that see it are dazzled by the music, the singers, the dancers and unless you are there it is hard to experience this any other away. They told us you made this particular bit of unknown history, which is the story of Anna Porphyrogenita and Vladimir the Great, truly come alive. Some people wanted to see this as a movie or even in Las Vegas.

Are there future plans for another Byzantine-themed Rock Opera?

Our new production which we are aiming to debut in the Spring is “The Legend of Alexander the Great.” It is a concert with multi-media projections and narration that tells Alexander’s story from the Old Testament and the Prophecies of Daniel to the Alexander Romance, where in Byzantium he becomes a wise Byzantine Emperor. There are the historical elements and the fantastic myths that we are digging up here. We are very excited for this new show.

How has the overall experience affected you? What advice do you have for others seeking to create new and unique experiences to promote their passion?

It is very hard. You need a lot of money and a lot of patience from your loved ones. You must have a business sense and you have to seek great talent and producers and people that are in the business as well. Dealing with artists is also extremely hard so you have to be prepared and you have to put away the egos and work together.

How can we learn more about your productions?

Book our productions “Anna and Vladimir” and “The Legend of Alexander the Great” through me at vchrissochos@gmail.com.

Purchase our discography at CdBaby:
https://store.cdbaby.com/Artist/Porphyra
on iTunes:
https://itunes.apple.com/us/artist/porphyra/906248555
We are also available digitally worldwide through all your favorite outlets.