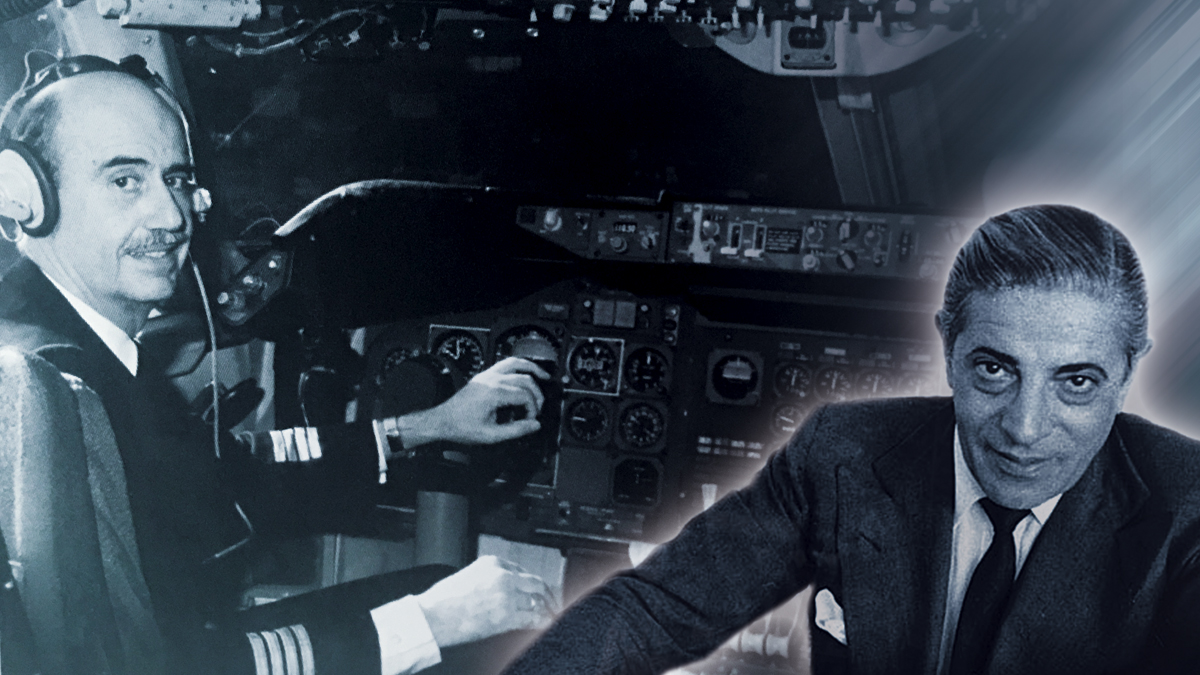 In February of 1984, Paul J. Ioannidis retired as a Captain of Olympic Airways (OA) having logged 22,500 hours as a Captain and Instructor. From the time Aristotle Onassis acquired OA in 1957, Ioannidis had served in various capacities – Chief Flight Instructor, Chief Pilot, Flight Operations Director and eventually Director General. For many, three decades of an illustrious career may be enough. But for Ioannidis, this is but a sliver of the adventures and accomplishments of his life.

«charismatic» exercising a compelling charm that inspires devotion in others.

“a charismatic leader” From the Greek – charisma which means gift, grace

Ioannidis was born in Germany in 1924, where his Cypriot-born father was pursuing his medical studies. He never knew his mother (who was from Volos, Greece); tragically she died only six months after Ioannidis’ birth. It was the event that led his family to come back to Greece.

During WWII, Ioannidis, at the age of 18, joined the Resistance against the German occupation as part of the team of Nikiforos in the Greek People’s Liberation Army (ELAS) and subsequently “Force 133” an allied military unit operating in the mountains of occupied Greece. His German birth certificate and language skills would serve him, and his comrades well. When the War was over, King George VI honored him for his bravery with the King’s Medal for Courage (KMC) of the British Empire and a Certificate of Commendation by Field Marshall Lord Alexander which he returned both on May 10,1956 in protest on the same day that the British hanged two freedom fighters in Cyprus.

He was trained as a fighter pilot by the British Royal Air Force in Southern Rhodesia and subsequently served with the Royal Hellenic Air Force. In 1947 he found employment with the Greek national carrier TAE. But it was in 1957 when he met Aristotle Onassis that his life changed, and destiny prevailed…

Colleague, confident, trusted advisor, Ioannidis had not only a strong professional career with Onassis, but also a friendship built on trust and respect. He was fortunate to know and work with his children, Alexander and Christina, both of whom died young and tragically.

A Lifetime member of the Board of Directors for the Onassis Foundation, Ioannidis has been involved with Foundation’s inception (after the death of Aristotle Onassis in 1975), the mission, endeavors, expansion and achievements. From 1977, he dealt with the business activities of the Onassis Foundation, where he ultimately undertook the duties of Chief Executive Officer of shipping and commercial operations. He has worked together with the Board Members of the Foundation to keep the Onassis Legacy alive and has also been honored with several distinctions.

In 2013, he published his biography “Destiny Prevails” to give readers an “insider’s look” into who Aristotle Onassis was, what he accomplished, and what he hoped to construct for Greece’s future generations. Ioannidis also sets the record straight on the legal battles, challenges and current state of affairs with Onassis’ last heir – Athena.

There have been many books and movies about Aristotle Onassis, what were the most important things you wanted people to understand about him when you wrote your book?

Aristotle Onassis’ main attribute was his courage. He showed courage in his personal and social life, as well as courage in his business ventures. He was a visionary with a very strong intuition, a gifted man, a man of simplicity, an affable man who had such a positive aura that he could make his interlocutor feel completely at ease with him right from the start regardless of nationality, religion, race, level of education or financial status.

Something kept driving him to keep pushing ahead. The airline industry was a completely new business venture for him. He was led into this enterprise by his innate desire to always come out on top. His goal for Olympic Airways was to repeat what he had achieved with his commercial fleet of ships – to cross the oceans with the Olympic rings on his ships’ smokestacks. He was indeed fortunate enough to see his Greek airline’s logo fly across five continents and earn the respect of our competitors and the appreciation of passengers.

When we started our routes to Europe and USA, Onassis had bought gold-plated utensils and candles for the dining service in the first-class section. He wanted to place a piano in the B-707s and B-747s. He was always thinking about how to provide passengers with the best possible service, and everyone recognized this without exception. He wanted to offer passengers all the finest things to help make their trip comfortable and luxurious. The airline’s basis of operation was “safety, passenger comfort and economy”, in that order. The aircraft’s appearance reflected Greece’s image. The behavior of the crew had to have an air of Greek hospitality.

Following Alexander’s tragic death, his father’s deep humanitarian side revealed itself when he decided to give half of all the money he made throughout his entire life back to the people for public benefit projects in the areas of health, education, culture, environment, and social solidarity.

If you could describe Aristotle Onassis in just one word, what would it be?

I would say that he was CHARISMATIC.

Working with Olympic Airways and Aristotle Onassis, you had the opportunity to meet many people, movie stars, politicians, royalty. Is there one person who surprised you, was not at all what you anticipated?

During my life time I had the chance to meet with very important and famous people. The person however who surprised me more was Maria Callas. Apart from Aristotle Onassis, she was the most famous Greek in the world. She was the “Diva” surrounded by an aura of mystery and rumors about being temperamental and arrogant. When I first met her in the flesh, I was captivated by her strong personality but very soon I realized that she was down to earth, very sensitive and carrying. Maybe it was due to the fact that she was so much in love with Aristotle and so happy that she let all her feelings loose and enjoyed life immensely.

With a new generation as Executive Board of Directors, how does the Foundation work to keep the goals of Onassis’s intentions in focus as the years go on?

The idea to pass over the reins of the Foundation’s executive board to a younger generation was in the back of our minds since 1984. Of course we knew that there would be reactions and criticism but our goal was to be faithful to the wishes of our founder who believed that “You can find capability and buy it but dedication, honesty, loyalty and good nature cannot be bought. You either have them or you don’t”

Thus after 30 years of successfully steering the affairs of the Foundation, it was unanimously decided by its board to step down as executive board and give the command to the new generation, as from July 1, 2005. Those selected, apart from the proper academic qualifications, have also the unique quality that was nourished with the ideals and noble causes of the Foundation in promoting social welfare, arts and letters.

The new generation brought fresh and innovative ideas and with its dedication and hard work enhanced even more the work and the image of the Foundation keeping the Aristotle Onassis Legacy alive.

In the political and economic situation in Greece today, how important do you think it is for young Greeks to remember the heroes and role models that have come from Greece?

In recent decades, we have witnessed a crisis in leadership and the decline of principles and moral values all over the world. We lack role models in all sectors of public life and there are no visionaries out there capable of inspiring and mobilizing their associates, the world, and young people in particular.

Times have changed and so have people priorities. However, societies will always need people who will lead by virtue of their own personal example. The greatest satisfaction in life comes from creating something and gaining a sense of giving something back to society.

Therefore, it is very important for the young Greeks to remember and cherish their heroes. It will boost their moral and help them in re-establishing their identity, thus giving them the strength to go through very difficult situations in a more or less globalized society.

In your book, you tell the story of the woman who read your coffee cup and told you that your destiny was to become a pilot… a concept that seemed to come as a surprise to you… If you had never had that cup of coffee in June 1944, do you think your life may have turned out differently?

Definitely not. I do not believe that my life would have turned out differently. That cup of coffee and the prophecy of the old woman just gave me the grounds to reflect, to play back the video of my life, the various circumstances which led me to the conclusion that it was my “destiny” after all to become a pilot and have all these exciting experiences including my close connection with such an exceptional, charismatic personality as Aristotle Onassis.

You mentioned the desire of Onassis to give half his fortune to the public benefits of the Greek people. Can you tell us a bit about some of the projects and programs that the Onassis Foundation has undertaken to accomplish this wish?

In line with Aristotle Onassis’s wish, as noted in his will, the Onassis Foundation was established in 1975 in order to provide support to Greece and its people in critical areas: health, culture, education, social solidarity and the environment.

The efforts of the Foundation in these 41 years have consistently focused on securing accessibility to these critical benefits, by the largest possible number of people.

The ultimate goal of the Onassis Foundation is to release the potential of Greek society, improving the present and offering a more optimistic look ahead.

The Onassis Foundation has successfully realized milestone projects and initiatives in Greece and abroad, including: