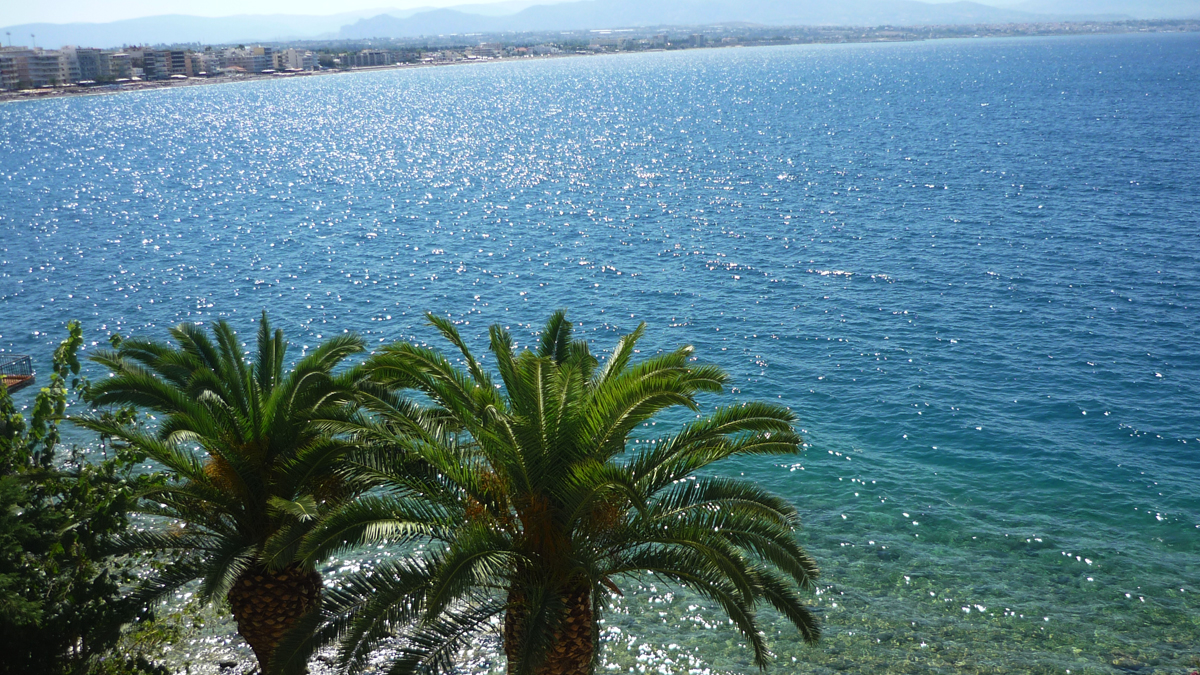 According to Xenophon, the Spartan soldiers came to Loutraki to recover and rest after the Peloponnesian War battles; and thanks to the city’s healing thermal waters, Lucius Cornelius Sulla, the 2nd century BCE Roman emperor, was healed of a severe dermatopathy.

Today, the mythical “Gate of the Peloponnese” is a city full of life, with countless leisure and entertainment options, covering every taste. Less than 50 miles from Athens, Loutraki is a spa town well known since antiquity.

One of the most significant sightseeing attractions is the lake of Heraion, also known as Vouliagmeni Lake, just 7.45 miles from Loutraki. A pine forest surrounds the lake, which joins the sea through a small canal. At the edge of the lake stands the picturesque chapel of Agios Nikolaos.

The lake’s waters are particularly warm and allow for swimming until late in autumn.
It was named after the sanctuary of Hera, situated nearby. Below the remnants of the sanctuary there is a small idyllic beach with deep water. Above the Heraion you can see Melagave Lighthouse, one of the most beautiful lighthouses in Greece.

In Loutraki, be sure to drink the thermal water, which has been called “the water of life” since antiquity. In the imposing round building which hosts the municipal thermal spring, visitors can take in an impressive mosaic artwork, referencing ancient Greek mythology and created by Stephanos Xenopoulos, the brother of noted author Gregorios Xenopoulos.

The Monastery of Saint Patapios is one of the most noteworthy pilgrimages in Peloponnese. The monastery was built at an altitude of almost 2000 feet. To get there, you’ll drive about nine miles highway and then climb up 180 steps. Challenging but so worth the effort!

At the Loutraki Thermal Spa, one of the most modern spa facilities in Greece, you can renew and revitalize your body and spirit! In a spacious state-of-the-art space (more than 55,000 square feet!), you can choose from among a great variety of treatments: hydro massage (in bathtub or pool), therapeutic or relaxing massage, sauna, steam bath, mud therapy, chocolate therapy, anti-aging facial treatments, etc. Loutraki Thermal Spa is open all year, including weekends and during public holidays.

Cross the Isthmus Canal, which connects the Saronic Gulf and the Corinthian Gulf. Most visitors are accustomed to seeing it from above, but “Argo” sails daily across the canal offering you an experience you’ll remember forever!

Be sure to visit Loutraki’s Casino, it’s the largest casino in Greece and one of the most well known in Europe! Loutraki is also the city of sports with athletic facilities to accommodate major sports events, including:

In Loutraki you can take part in a variety of sporting activities as well, from adventure to extreme: from paragliding, cliff and bungee jumping, to climbing, diving, surfing, sup and water skiing.