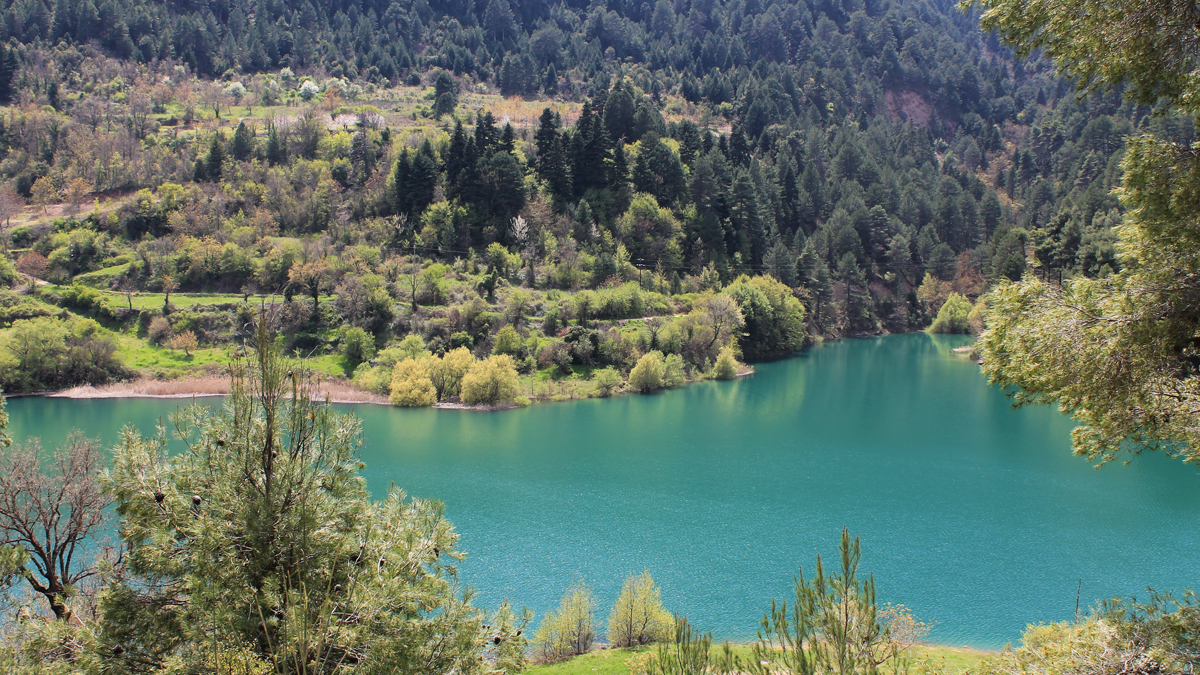 A reminder of one of the most impressive and dramatic landslide phenomena in modern Greek history, Lake Tsivlou is also one of the few natural lakes in Greece.

Lake Tsivlou is an alpine lake lying at an altitude of 2,625 feet on the mountain range of Chelmos, in Achaea. It was the result of a massive landslide in 1913 that drifted along two villages, Sylivena & Τsivlos (which the lake was named after), and blocked a bed of river Krathes.

The birth of Lake Tsivlou

In 1913, the region was just an open valley, in the middle of which Krathes flowed. There was a ravine and a small tributary of the main river on the west. At the confluence of the two, laid the picturesque village of Tsivlos. On the east side of the valley, on a much higher level, sat the village of Sylivena.

Residents of Sylivena were aware that their village was settled on a precarious spot. There had never been official research or a state warning, but small landslides had often occurred in the area and the locals kept reporting “infernal” roaring sounds. The winter of 1912-13 was heavy with snow and rain —both conditions favoring a larger-scale incident.

By March, tremors and roars grew frequent and intense. Several residents of Sylivena wisely decided to leave the village but many remained. On March 24th, 1913, a huge landslide curtailed the entire mountainside, from 5,413 feet to 1,968. It swept an entire area, 62.1 miles wide, and landed on the valley of Krathes crashing the small village of Tsivlos.

The voluminous soil blocked both Krathes and its tributary. It formed a “barrier” creating two lakes: on one side, the waters of Krathes created the homonymous lake and on the other side the waters of its former tributary formed Lake Tsivlou. The latter steadily rose and swept whichever houses of Tsivlos had survived the landslide. The waters of Lake Krathes also continued to rise, reaching the village of Agridi, 1.2 miles uphill. Sylivena was completely eradicated.

Autumn of 1913 came with heavy rainfall and Lake Krathes began accumulating a vast volume of water. Residents in the lower areas began to realize they had a “ticking bomb” over their heads. In fact, the freshly deposited landslide soil was too loose to withstand the enormous water pressure. Fears materialized.

On January 5th, 1914, the soil gave up and Lake Krathes emptied within minutes. The huge flow of water swept everything in its path, including the arched historic bridge of Krathes, near Akrata. Lake Tsivlou however remained intact.

With years gone by, the surrounding forests have grown over the landslide soil. Despite the vast amount of silt, Tsivlou remains a very deep lake with steep banks. Its waters are fed by at least two underground sources and three forest streams.

It covers an area of 8.3 acres and has a shoreline of 1.1 miles that range (up to almost 400 inches per season), depending on yearly rainfall. Being under a hundred years old to date, lake Tsivlou is the youngest natural lake in Europe. Adaptive evolution has not yet taken place, so most of its banks are barren —half of the times flooded, preventing mainland plants from expanding and at other times dry, preventing any aquatic plants from taking root. It hasn’t developed a rich aquatic vegetation either, but for reeds in shallow spots and a yet-to-be-classified weed at the bottom.

Freshwater mullet from Krathes were trapped in the lake and they are now the only native fish of Tsivlou. In the last few years, locals have taken the initiative (unfortunately without any official research conducted) to introduce carp, mosquitofish, trout, and crayfish to the waters.

Lash forests of pine and fir dominate the current landscape making it a strikingly beautiful hiking destination, while the lake and its shores are popular recreational areas.

To learn more, or to plan your trip, visit: