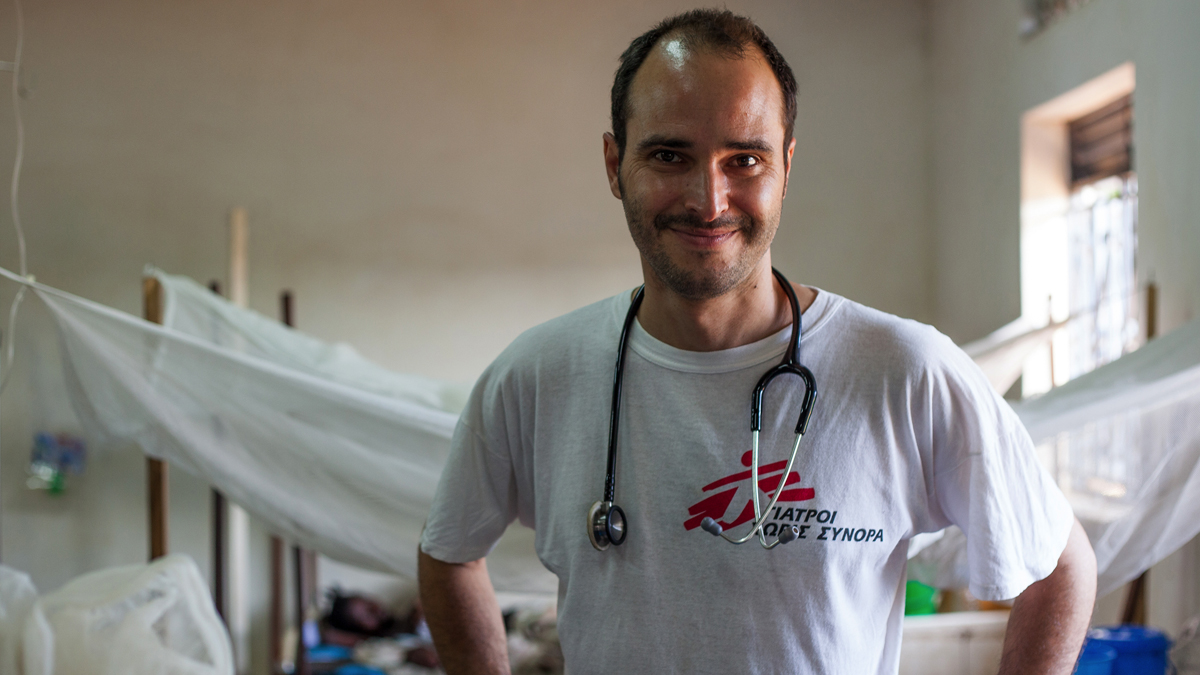 Dr Christos Christou joined Médecins Sans Frontières/Doctors Without Borders (MSF) 18 years ago. Through great dedication, he has found his way to leadership of the organization and helping people around the world.

Médecins Sans Frontières/Doctors Without Borders defends humanity and alleviates the human suffering for 50 years now and is committed to ensure access to basic health services and essential medicines for everyone. 18 years ago, Dr Christos Christou joined the organization and today as the International President of Médecins Sans Frontières. He is dedicated to the alleviation of the human suffering, inspired by the idea to help people who had no access to medical care for a number of a reasons, shares with us some of the most powerful moments in this course.

Q.You joined Médecins Sans Frontières/Doctors Without Borders (MSF) back in 2002. How did you decide to join in the first place?

I met Medecins Sans Frontieres/Doctors Without Borders (MSF) when I was still a medicine student. I was mesmerized and intrigued by the idea to help people who in many cases had no access to medical care by living in areas without proper infrastructure, isolated or damaged by conflicts or natural disasters. I was very inspired by the new perspective the international and emergency profile of the organization offered to medicine.

After graduating from the Medical School of Athens and having completed my practice, I joined MSF for a first time in 2002 –while waiting for my specialty-as a doctor in a program for migrants living in Greece. The next year I found myself on a mission for HIV/AIDS patients in Zambia, south-central Africa. The particular projects meant to be a milestone in the history of MSF as led to a significant drop in the cost of HIV/AIDS drugs that gave hope to a big number of people, including many adolescents. The development came after our medical teams joint forces with legal experts, patients and grassroots organizations to put pressure on pharmaceutical corporations and governments to break the patent that would reduce drastically the cost of HIV/AIDS drugs.

Q.In 2019 you became head of the Organization. Can you share with us the most powerful moments in this course?

I went through many stages until my election as International President of MSF during the General Assembly of 2019, which took place in Dublin. Before assuming my new duties, I had served at the Board of the Greek section of MSF as General Secretary, Vice-President and President for seven years. It was a comprehensive experience with lots of nice, teaching as well as challenging moments.

Over the years I saw people fleeing from wars, having lost everything but their hope to live, I met victims of torture, I treated severely malnourished children and I witnessed patients dying in isolation by infectious diseases I will always carry those people’s emotions in my memories.

There have been times that I found myself confronted with fear, desperation, and discouragement. The same time I will always remember the happy faces of those who recovered, regained their strength and managed to fight for other people’s life. It is particularly rewarding and empowering to care about others and alleviate the human suffering with empathy and respect to human dignity. Therefore, I would say that all the moments I recalled all these precious experience and feelings throughout the course were the most powerful ones.

There are plenty of challenges but I would like to refer to the criminalization of the humanitarian action and solidarity, by extension. Over the last years, MSF has been targeted with hospitals, medical staff and patients being bombarded leaving those most in need without access to lifesaving care. In all such cases, both people to whom we provide care and our staff are under great risk for no legitimate reason. The bombardment of the MSF hospital in Kunduz, Afghanistan, in 2015 is such an example. We need to remain vigilant and speak out loudly about such incidents, which are unacceptable even under extreme conditions, such as a war. Because even wars have rules and there are no “mistakes” under international humanitarian law. As a humanitarian, medical organization, our main mandate is to protect human life and that is what we do as MSF for almost 50 years now around the globe.

A second big challenge is to retain and further nurture the trust of the communities where we act and put our patients in the center of our interventions; to better articulate it, to have our patients as partners to our health services by designing and implementing strategies together. The failure of doing so may have catastrophic consequences and the recent Ebola outbreak is a good example.

Another big challenge is to ensure access to basic health services and essential medicines for everyone, especially nowadays that innovation, research and development of new treatments addressing major public health problems are not a priority of the pharmaceutical industry.

Q.What about public health? Which health hazards do you consider the most intimidating/threatening?

There are new parameters added in this equation with the most dominant ones being the climate degradation, the urbanization and the increased number of people on the move. There is a long way to go for the global health community. One of the major hazards is definitely the antimicrobial resistance. We run out of antibiotics and there is nothing on the pipeline for the coming years. I am also very much concerned of the rising tide of anti-scientific thinking and the reluctance by several groups of people in essential vaccinations. Increased poverty, inequities and social injustice are “the best recipe” for radicalization, man-made catastrophes and the rise of communicable, as well as non-communicable, acute and chronic diseases.

To keep defending humanity and alleviate the human suffering. To keep high on the international agenda some key medical challenges humanity is currently facing, including the phenomenon of populations on the move due to wars, violent conflicts, climate change and poor living conditions, along with other underreported crises raging in different parts of the world. For MSF is also very significant to retain the financial and operational independence while to further improve the quality of the provided medical services in its programs. On top of all these, is to enforce the long lasting relationship with the society that supports our work for almost 50 consecutive years now. We are very grateful to all our financial supporters and volunteers.