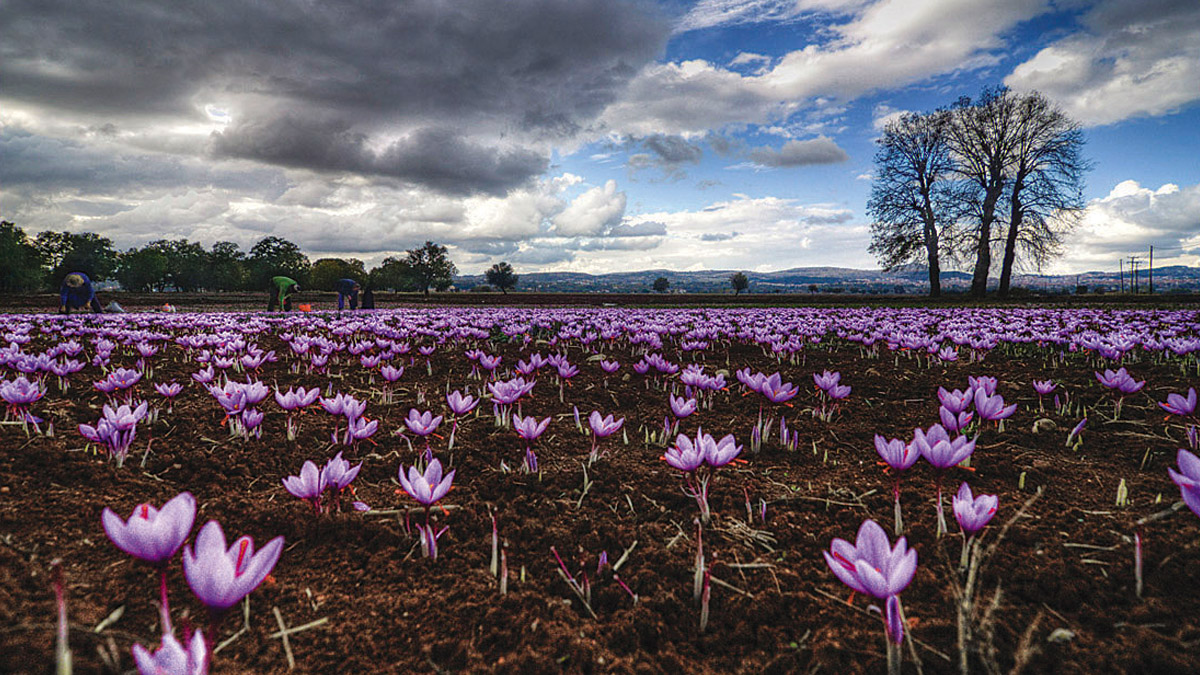 Since ancient times, Greeks realized how precious Mother Nature’s gifts were. The Mediterranean climate along with the geological formations of the country created fertile ground where an abundance of wild herbs and plants could grow. Today, there are about 1800 endemic species that grow on Greek soil, with certified medicinal properties. Over the years, Greeks have successfully cultivated and benefitted from these various special herbs and foods, like the divine Krokos Kozanis, Greek Saffron.

Although saffron is a spice with variations cultivated in regions worldwide, it bears Greek origins as it was first produced in Crete during Late Bronze Age by the Minoans. Its presence on Greek soil had since disappeared until the 17th century when Greek merchants from Northern Greece imported the seed from Austria to the prefecture of Kozani. The variety of saffron produced in Greece is called Krokos, due to the area where it is cultivated, a complex of 40 villages in Kozani, called Krokokhoria.

Greek Red Saffron comes from the flower Crocus sativus, a plant with height ranges from 8 to 12 inches. Its branches bear about four flowers of purple color, each with three red “stigma” threads. During autumn season, the stigmas are collected and laid in the sun to dry.

While saffron is not an endemic plant of Greece, Greek Red Saffron (Krokos) is of the highest quality. The soil along with the mild climatic conditions of the area and the techniques used during cultivation and harvest are the factors that ensure a guaranteed quality of product. In fact, Krokos Kozanis is a certified organic produce which bears the title of Protected Destination of Origin (PDO) and is exported internationally.

Following chemical analysis, Greek Krokos has a 45-points higher coloring power than all other varieties of saffron, a fact that intensifies its properties. It contains picrocrocin and crocin, ingredients responsible for its vibrant red colour. It also contains vitamin B12, lycopene, zeaxanthin, alpha-beta carotene and vitamin C, iron, potassium and magnesium.

The complex of vitamins and ingredients contained contribute to a wide range of benefits, some of which are anti-inflammatory, antioxidant, anti-aging and anticancer. More precisely, it helps towards the proper function of the digestive system, the maintenance of cholesterol and blood-pressure levels at a normal range and the relief of stomach ache.

Krokos enhances brain function and memory and it has a beneficial effect on people who suffer from dementia or Alzheimer’s. It has antidepressant properties and if used externally, it helps treat skin diseases and prevent aging.

Its medicinal as well as aphrodisiac properties which have been praised since Homer’s time (it has been mentioned in his writings) and have nowadays been proven by scientific research, can only indicate what a treasure Krokos is for the health.

Krokos is the dried product of the flower Crocus sativus and is a spice that can add its rich flavor to almost anything. A small pinch of Krokos to warm tea, soups, pasta or meat offers the health benefits of the spice and makes for an unprecedented culinary experience.

Available on the market are the dried threads of the flower whole or in powder form. It is preferable to purchase the threads as they keep their intense flavour and colour for a longer period of time.

A small amount of Krokos threads offers a wide range of health benefits and this is why a daily consumption is recommended. Bear in mind that when in large portions Krokos tends to have a bitter taste, so beware how much you add to your food or beverages.

In recent years there has been extensive research on the medicinal properties of the herb. In one case, the General Chemistry Laboratory of the Agricultural University of Athens in collaboration with the French Laboratoire de Spectroscopie Biomoléculaire, U.F.R de Pharmacie, revealed that the crocin contained in saffron stigmas contains unusually water-soluble carotenoids which could minimize the multiplication of leukemic cells.

Greek Red Saffron is an organically cultivated product, certified as a Protected Destination of Origin; there is no wonder why it keeps a high rank on the Greek Superfoods list! The fact that it is among the most exported Greek products worldwide and the international attention it has gained is a testament to its significance.