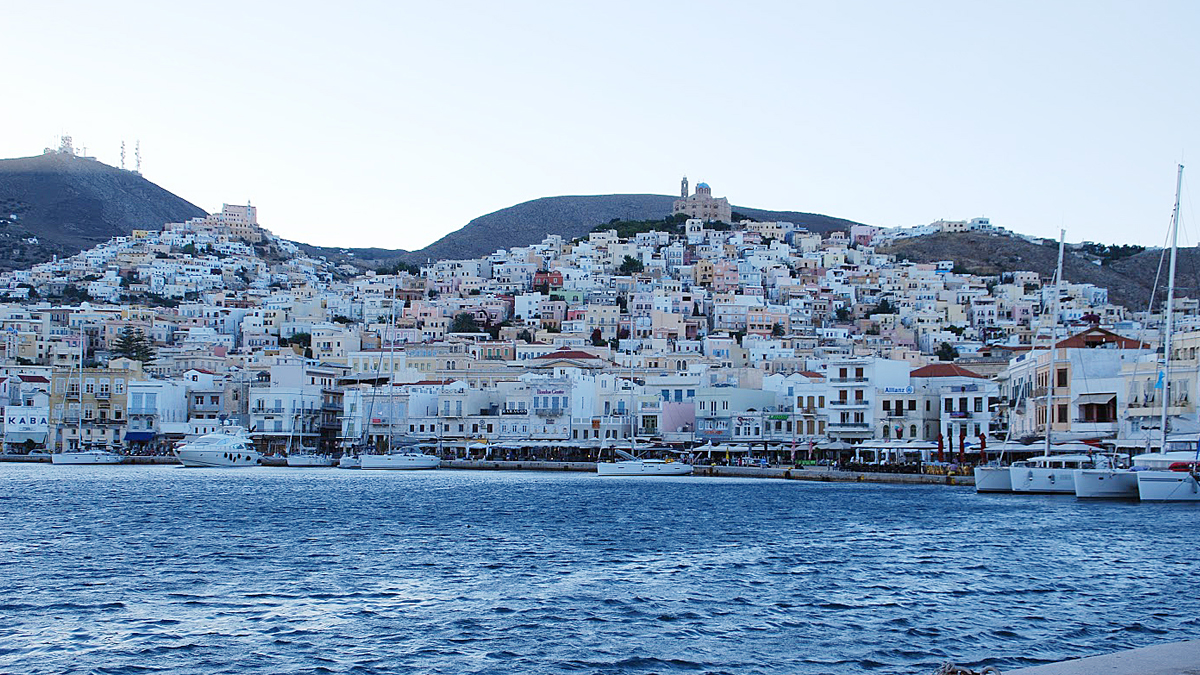 The name Ermoupolis literally means the “city of the god Hermes”. When the town was established, the entire island was transformed into a hugely significant commercial and industrial center of Greece. It seems only right that Hermes, god of commercial affairs, rightly became the patron deity of the capital of Syros.

Ermoupolis, the capital of Syros Island, is a picturesque colorful town with unique architecture and a striking aesthetic. By contrast with the rest of the Cycladic islands, Ermoupolis resembles the eastern Italian coastal towns rather than the typical white and blue “monotony” of the neighboring islands of the Cycladic cluster. Ermoupolis offers a rapturous experience for the modern visitor. It stands on a site resembling a natural amphitheatre with neo-classical buildings, old mansions, and multi-colored houses cascading down to the harbor.

The town’s history begins in 1822 during the Greek War of Independence when Greek rebels (from Asia Minor, Crete, Psara, Spetses and other places) and their families immigrated to Syros seeking protection and safety from Turkish aggression. The presence of a Christian Catholic community in Syros gave good cause for the island to fall under the wing of the European allies. In 1823, these refugees, grateful for having found safety and shelter on their new island, built the church Metamorphosis of Christ which was, and still is, the center of the Orthodox population of Syros.

Between 1840 and 1880 Ermoupolis rapidly developed and was soon transformed into a cosmopolitan maritime city as a result of an external population movement in a short time. Soon, a bourgeoisie class developed. In the middle of the 19th century, along the coast of Ermoupolis, a large industrial zone with a yard, tanneries, spinning, and steam mills was built. By 1856, it was the second largest city in Greece, after Athens, in population.

Ermoupolis also became an architectural wonder in the second half of the19th century as well. 1844 saw the aristocratic National Bank of Greece establish its first branch in Ermoupolis. In 1848, the quarter of Syros, Vaporia, and the church of Saint Nicholas, were built. By 1864 the “Apollon” Theater was inaugurated; it is the work of Italian architect Pietro Sambó. The city’s impressive town hall was built by Ernst Ziller, completed in 1891. The statue of Andreas Miaoulis, hero of the War of Independence stands proudly at its entrance. It was also during this time that the municipality of Ermoupolis was the first to raise a monument in Greece to honor the “unknown soldier” in the struggle of 1821.

Ermoupolis began to decline after 1880 due mostly to the rise of the port of Piraeus as shipping and trade began to take place more and more on the Greek mainland. Ermoupolis, however, lost little of any grandeur this time.

Today, the modern town of Ermoupolis is an incredibly attractive tourist destination for travelers seeking a combination of culture and architectural beauty. Several museums are scattered in the city (the Archaeological Museum, the Folklore Museum and others) as well as several beautiful public and private buildings. Many cultural events take place during the summer such as theatrical performances, music concerts, and art exhibitions.

Ermoupolis is quite properly due its title as the cultural capital of Cyclades!