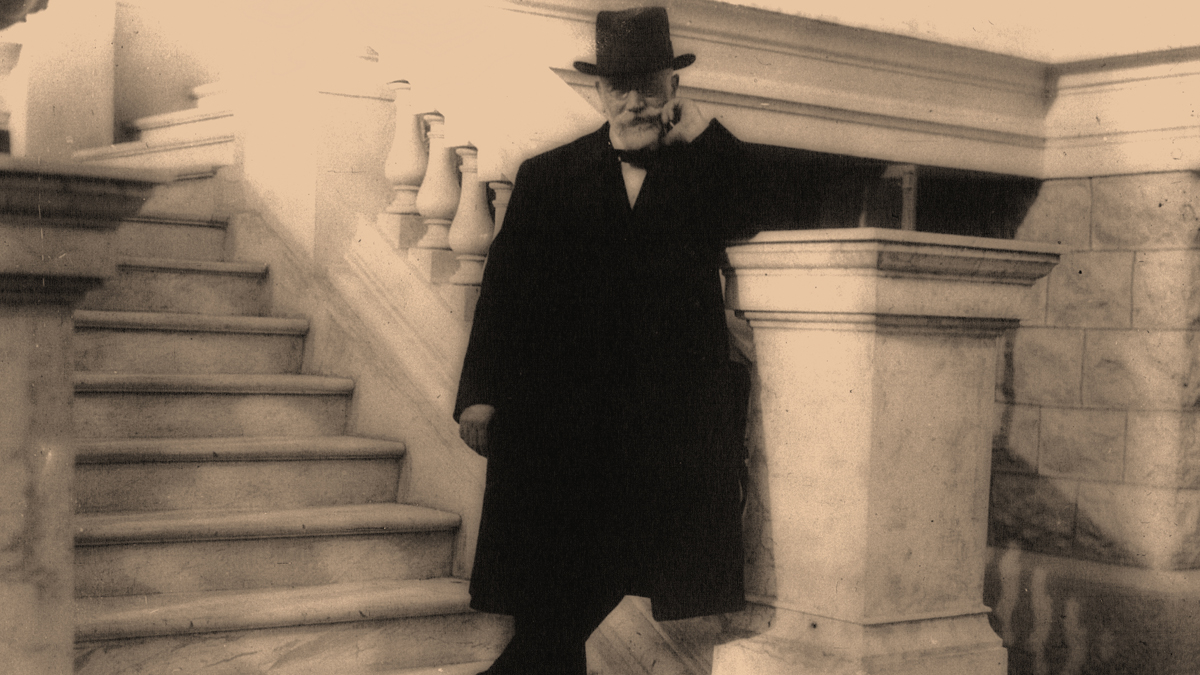 Eleftherios Venizelos, undoubtedly one of the most charismatic political figures of 20th century Greece, if not also the most influential…

Countless streets and squares throughout Greece, as well as the national airport in Athens are named after this great statesman, and plenty of Venizelos statues stand throughout the country. Rightly so, Venizelos was in the political spotlight for more than 25 years – years of great significance to modern Greek history – providing strong leadership, the ability to implement viable solutions, and ultimately serving seven terms as Prime Minister of Greece.

Venizelos was born in August 1864 in Mournies, near Chania, Crete, which was then ruled by the Ottomans. When Venizelos was two years old, his family fled from Crete to Syros as his father was involved in the Cretan insurrection of 1866. Venizelos left Syros in 1881 and studied law in the University of Athens. Upon completing his studies, he went to Chania as his family had been granted amnesty and was able to return to Crete in 1872. Venizelos worked as a lawyer in the city until he started his career as politician when he became involved with the liberal party of the island.

Venizelos was well known for his eloquence and political ideas in the Parliament of Crete, especially during the Cretan revolution of 1897. In 1898, the four Great Powers (England, France, Italy, Russia) declared the autonomy of Crete and Venizelos became the Minister of Justice of the Cretan State. Later, after a conflict with the High Commissioner Prince George, he withdrew and participated in the revolution at Therisso (1905), which aimed to remove Prince George and the unification of Crete with Greece.

The political situation in Greece after the military coup of Goudi (1909) brought the Cretan politician to Athens and the people showed great enthusiasm for him. Eleftherios Venizelos, founder of the new Liberal Party, was easily elected, as the old parties chose to abstain in the elections. With no time to lose, Venizelos quickly introduced broad reforms in every sector, such as compulsory and free elementary education and the permanence of civil servants in the Greek Constitution of 1911.

Venizelos brought victory to Greece in the Balkans Wars (1912-1913) and satisfied the territorial aspirations of the Greeks with his masterful negotiations. Then, World War I came and a clash with the Crown occurred as to whether Greece should take part in or stay neutral – this conflict resulted in the National Schism (1915-1917). Following World War I, Venizelos achieved a diplomatic triumph by signing the Treaty of Sèvres and making a “Greece of two continents and five seas”. Moreover, he laid the groundwork of the Greek-Turkish “friendship” (1930). On January 1933, Venizelos formed his last government with an assassination attempt that came five months thereafter. Another attempt was made in 1935, as the political climate changed greatly in those years. Venizelos left Greece for a self-inflicted exile in Paris one year after the failed Venizelist coup of March 1935. It was there he took his last breath.

In recognition of the emblematic personality and great contribution to the Greek political scene of the 20th century, the National Foundation of Research & Studies “Eleftherios K. Venizelos” was established in 2000, in order to fill the gap in the research and study of the life, era and work of the great Cretan statesman. One of the many proud achievements of the foundation was the restoration of a monument of great historical importance, the family house of Eleftherios Venizelos in Halepa, Chania.

The Museum-House of Eleftherios Venizelos is classified as a historical house, as it recounts the life of a personality and preserves authentic objects, most of them in their original position. The museum is a fine example of the typical mansion of 19th century with western influences, consisting of three floors and a total of 18 points to visit on the Museological Route. The ground floor and part of the first floor is exactly as it was delivered to the foundation by the family, while five points in the first floor and the attic present the action of Venizelos, divided in five thematic sections: “The Rebel”, “The Politician”, “The Diplomat”, “The Man” and “The Myth”, with the aid of visual material and authentic museum items from the foundation’s collection. Last but not least, two points show the assassination attempts against Venizelos in 1920 and 1933 with original documents of the time (blood-stained clothes and car, respectively) and visual material.

Additionally, in the attic there is a “classroom” that uses modern technology to provide an interactive exhibition combined with educational games, aiming to bring the public -especially young children- closer to the world of history. The value of a museum is to communicate with its visitors and contribute to a fruitful understanding with the past. And this museum is a must-see when visiting Chania, it will give you a glimpse into the some of the greatest history of a great Cretan and modern Greece!

The manuscripts of the translation of Thucydides by Venizelos.

The pen with which he signed the Treaty of Sevres (1920) and Lausanne (1923) and authentic texts.

The bloody clothes from the assassination attempt against him in Lyon train station in Paris (1920).

The car Packard (model 1929), which was traveling in the assassination attempt of Kifissias Avenue (1933) and bears the scars of 66 bullets. Also, an identical car, one of two surviving worldwide, so the visitor has a complete picture of the condition of the vehicle prior to the attempt.

The revolver he used as a revolutionary in Crete.