Politismos eMagazine | Delphi: Journey to the “Navel” of the Earth
7044
post-template-default,single,single-post,postid-7044,single-format-standard,ajax_updown_fade,page_not_loaded,,large,shadow2 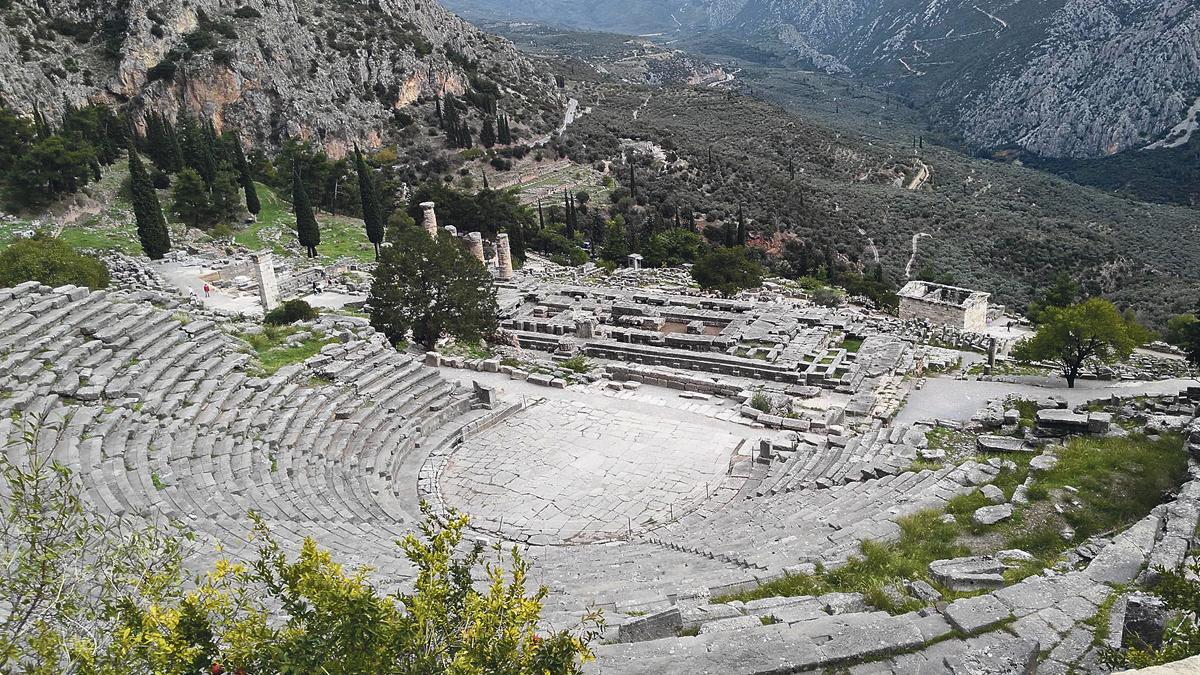 Delphi:  Journey to the “Navel” of the Earth

Few places can boast the energy that Delphi delivers to its visitors! The navel (“omphalos” in Greek) of the Earth, the place where Ancient Greeks sought consultation from the oracle Pythia (the “priestess”). She was the channel through whom the gods would communicate with their people.  Her ambiguous prophecies delivered to priests for translation…

When the Temple of Apollo in Delphi was built, a rumor was spread that the god Apollo was living inside his sacred plant, a laurel bush, and through the rustle of its leaves, he prophesied of things to come. The Pythia, sitting in a high, gold-plated tripod above the temple gap, gave her divine revelations in a state of ecstatic and sacred delirium. Initially, prophecies were revealed only once per year, but as they became more and more famed, the predictions were given on the seventh day of each month, except for the winter since Apollo was absent during that time.

All these prophecies were considered law to the Ancient Greek world, making the sanctuary a kind of regulator for crucial issues, such as wars or colonization, giving it tremendous power. Interestingly, the revelations were so ambiguous that one could easily interpret them as they wished (just as we say today that “law is open to interpretation…).

Intrigued? Can you resist visiting Delphi? So close to Athens, it blends striking landscape mountain views and the intoxicating sea breeze. Green fir-covered slopes and nature at its best embrace the road, forming a brilliant scene that induces peaceful tranquility.

Delphi still maintains the historical-archaeological interest of visitors. Recognized as a World Heritage Site by UNESCO in 1987 for having a phenomenal influence throughout the Ancient world and for its rich monuments, there are several places within Delphi to which special attention should be paid, apart from the Temple.  The Kastalia Springs, where it was believed that the Pythia would bathe along with the other priestesses and priests, was also the place where people seeking consultation would first bathe to be purified. You can find the most ancient spring near the public road, though there aren’t many signs directing visitors here.

Iera Odos, the sacred street of Delphi, began at the Temple of Apollo and ended to the altar of the Chians. Every time in antiquity when someone wanted to visit Delphi seeking guidance, he followed that road.

That path is the same today and hundreds of tourists follow it to arrive at the Temple.

Be sure to visit the Ancient Theatre.  It is here where the Ancient Greeks celebrated and held various religious, sporting or music events. Located just northwest of the Temple, it is among the very few ancient theaters that we know exactly its creation date as well as how it was used throughout the centuries. It is also one of the best preserved sites of its kind.  The ancient Delphi stadium is located at the highest point above the sanctuary of Apollo, visitors will need to take the steep path found at the left of the theater. Thousands of spectators – 5,000 at a time – would attend sporting events here some millennia ago.

Last but not least, and most certainly of undeniable importance, the Archaeological Museum of Delphi, the second most-visited museum in Greece, is where you can take in a comprehensive look at the history of the “navel” of the Earth.  With the benefit of a rich collection of ancient findings, including sculptures and statues, Delphi comes alive again. Be sure to seek out the statue of “Iniohos”, the “Omphalos” stone and the “Sphinx of Naxos”!