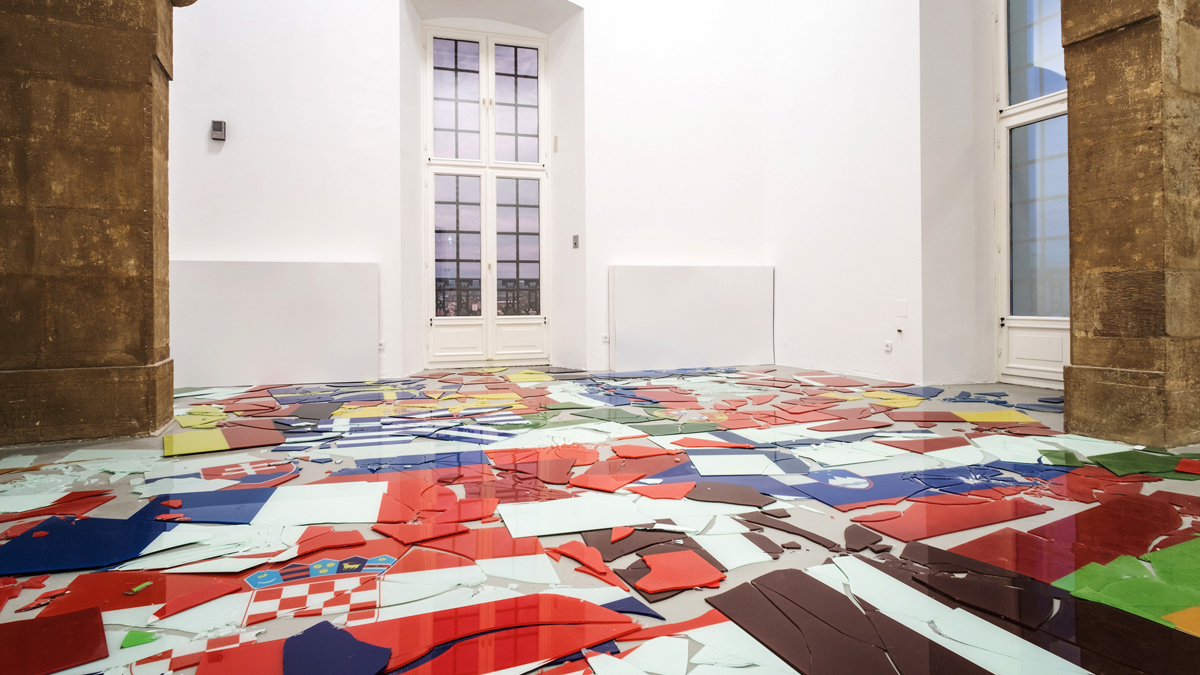 An interview with Costas Varotsos, Sculptor and Professor of Architecture – “Art is a mirror of reality, of the times that we live in.”

Concerned about the future of Europe, Costas Varotsos presented his new work this past summer “Composition-Decomposition” (2017). The 27 flags of the European Union member states lie broken on the floor with two glass spirals emerging from them. “We are at a critical moment. It is as if we were carrying the flag of the European Community and it fell from our hands. The idea of ​​the European Union is breaking down”, Varotsos said, on the eve of the independence referendum in Catalonia…

I met him in between his travels. Costas Varotsos had just returned from Washington – where he was preparing an exhibition that opens in 2018 – and a few hours before he was leaving for Cyprus, where one of his oldest works, “The Poet” is about to “move” from the Famagusta Gate, to Nicosia’s central square. We spoke of global matters, economics, and art… and how are intertwined.

You mentioned that modern art has lost contact with society and is trying to recover that relationship now. Is this possible?

After the Industrial Revolution, there was over-optimism that the analytical approach could actually lead us to the objectively right. This way, artists stopped caring about where they were; they started expressing their opinion, ignoring the environment, the historical space.

Art became more introvert, speaking mainly about itself. This culminated with Joseph Koshut’s work, “Red neon written in red neon”. At this moment, the meaning was more important than the form. The work had no materiality.

This approach however led to the ghettoization of visual arts. A self-referential system of art has been created, very different to music or other types of art, which have a more popular approach.

Visual arts remained a matter of few people, a matter of the experts. How many times have you been in front of a work thinking, “what is this “?

You mean that visual artists don’t care about their acceptance by the public?

We are now experiencing the collapse of this system. We also have great questions about that system’s morality, since economics have suddenly become of great importance in art. How much did the work cost, was more important than the work itself? When the economy itself became self-referential, like art, it collapsed. Art always talks about reality, just before the disaster.

How did glass become your favorite material?

I used glass for the first time to “The Poet”, a work I did in Cyprus in 1983 with DESTE Foundation. Wanting to make a tribute to the poet, I started analyzing him in a simple conceptual way, asking myself, “How is the poet? The poet is fragile, sharp, aggressive, suicidal.” And when I thought about a material that could concentrate all those traits, I came up with glass.

Apart from that, at that time I was also interested in the balance of space and time. I wanted to find a way to overcome the space and time imbalance that was lost due to the exaggeration of the concept of speed, creating a space-time gap.

“The Poet” is also an example of balancing space and time. Glass is like a piece of space. But if you put one glass over the other, it is like counting: one, two, three, four. That is time. So, “The Poet” doesn’t only represent the concept of the poet, it also represents a 100% space-time balance.

Once I saw the project, I realized that this was something I wanted to keep working on.

Your projects refer to modern reality/modern problems – for instance, the ship in Otranto and your recent work with the broken flags.

Art is a mirror of reality, of the times that we live in. My work has always been deeply political and social anyway. Art is a political act, not a decorative one. The European Union – however a brilliant an idea – is now in threat by centrifugal forces that we really do not know where they will lead.

For years, we used to hide things under the carpet. Now, the situation seems to be out of control. It is a critical moment, it is like we were carrying the flag of the European Community and it fell off our hands. The idea of the European Union has turned into pieces.

This is a concern that you have also expressed in the past.

This is true. I have been saying this for a long time, because I was intrigued by all these problems. I was talking to people, artists, citizens, workers. I saw the disaster coming. I could see the awful mistakes in Europe’s foreign policy. I was watching Europe contributing to the destruction and the destabilization of other countries – in Africa or Asia. All those policies were leading with mathematical precision to destruction.

Has the focus on the economic parameter contributed to this?

The problem is cultural, not economic. European peoples do have a common, horizontal, cultural line. They have been influenced by the Renaissance and Ancient Greece. Europe was built on two pillars, ancient Greek literature and Roman law, but has done nothing to unite peoples more, on a cultural level. When I go to Frankfurt I feel more of a stranger than when I go to New York. This is not reasonable.

Why is this happening?

Because the peoples of Europe have not worked on the notion of tolerance and their cultural osmosis.

The average American – USA is a multicultural society too – cries when he sees the American flag. For Europeans, the EU flag means nothing. The problem is the lack of a common cultural identity.

Immigration, on the other hand, is a shame of Europe. European people took off their worst self when it comes to immigration. We, Europeans, went to those people’s countries, burnt everything down and now are taken aback that mothers and children come to Europe to eat a piece of bread or to live a better life.

This is why I made the two projects you have mentioned above, the ship in Otranto and the broken flags – they are two messages I want to send out, highlighting the two main problems we are facing today – the dissolving situation of Europe and its relationship with the rest of the world.

You have said you are a pro-American Why?

From where, or what, do your get your inspiration?

Anything! Inspiration is something that resembles the expectation of a lover, where you think, “will she come?” You always have the doubt.

And when an inspiration ends, when a work is finished, you think, “Will she come again?” Inspiration cannot be taken for granted; it is not something you can order. Inspiration is like a woman.

What is your favorite work?

I can spontaneously answer that every project is a great adventure. I have works in different parts of the world. It is not that I just go there and place them, I go and I build them. In this context, I get to know the workers, the people, I make friends there…Every project is an adventure, it’s a part of my life.

One of my favorite works is the one on the Appennini Mountains. It is a huge installation, a project that lasted about a year. Also, my work in Lucerne, Switzerland, that unites the two squares- it is 140 meters long and 30 meters high. However, “The Poet” remains a project that “marked” me- both metaphorically and literally (en: he says and shows me a scar on his right hand). Everything started with “The Poet”.

Speaking of adventures, many of your work have gone into trouble! In Aegina, in Corfu, even “The Runner”.

When you put a work in a public space, it’s like putting a project into a natural environment, in the sea. You will suffer the consequences.

What I have understood, however, is that my works are at risk from the ruling powers, not from the people. My works have been tormented by the authorities! From the mayor of Corfu, who threw out my work, to the case of Aegina, where each political party was trying to eliminating the other, by “attacking” my work. I have found myself many times within political controversies! The same happened in Omonia square. I made the “Runner” when Evert was a mayor and a huge controversy sparked!

Have you had a similar experience abroad?

When you put a work in a public space there are always people who complain. And that makes sense. Public space is the extension of the private sphere. In Seattle, for example, many websites commented, “did we have to bring an artist from Greece to do this? “.

Plus, I am not the only one who has accepted criticism. A work of Richard Serra, a top sculptor, was removed from New York! In Torino, I have to move another work of mine. When placed in the cities, artworks have problems. In Omonia, for example, at the point where “The Runner” was, a hole should be made for the construction of the subway. In the end however, “The Runner” was not transferred close to Hilton, where it stands now! It couldn’t be moved, so we destroyed it and rebuilt it.

Apart from being a great sculptor, you are also a professor of architecture. How do you see Athens as an architect?

We do make a mistake when it comes to Athens. We tend to compare it to Rome or Paris, thus we have to compare it to other cities built at the same time, such as the outskirts of Rome or Brasilia.

If we do that, we will see that Athens has qualities that those cities don’t dare to dream of. The urban and architectural development in Rome’s outskirts, for example, has brought social problems that we did not have here. Italian neo-realism was born at the outskirts of Rome, to express the problems that this urban development created.

In my opinion, Athens is a perfect system, an sheer example of architecture. It has a spontaneous and chaotic character, but there was something more important. The sense of neighborhood and a social solidarity.

Errors did happen, though. The demolition of the neoclassical buildings came because when we did not have the opportunity to protect them as a state. In Italy for example, the center of Rome was protected because the government offered the poor people who used to live and could not preserve the old buildings new apartments. But the Italian state was rich, the Greek state was unable to do something like that. The neoclassical buildings of Athens were demolished due to poverty.