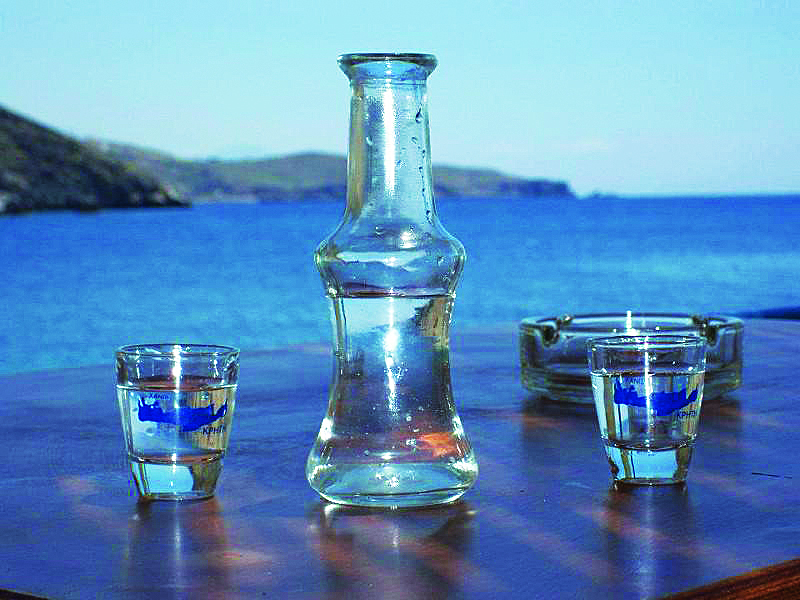 How is it possible, you ask, that the contents of a tiny little shot glass can evoke all your senses?  When you are toasting with Raki, a spirit affectionately called “fire water”, a light is sure to be ignited within your soul and make you long for beautiful Crete and the company of its gracious residents.

Raki, sometimes referred to as Tsikoudia, is a clear liquor with a unique flavor that is derived from its ingredients and processing.  Traditionally distilled in the fall, between October and November – the wine-distilling season – it is made from must and grape skins that remain after wine production.

The process has not changed much in its centuries old Cretan history, though in 1920, Eleftherios Venizelos instituted distilleries and allowed for special permits to farmers to distill Raki for commercial sale. At 37% alcohol, and traditionally served chilled and straight, it is a potent beverage.  A warmed alternative, known as Rakomelo is also made.  Honey and Raki are warmed and blended for a perfect winter’s night delight.

Raki is traditionally poured in both times of joy and in times of sorrow, with glasses filled as quickly as they are consumed.  When tipping your glass it is wise to keep in mind a humorous guide written by the wise Cretans.

The Decalogue of Tsikoudia

The first tsikoudia brings on the appetite,

The seventh brings a scuffle or illness

The ninth brings out the judge

And the tenth the funeral…

To “open” the aromatic flavors of the cinnamon and cloves, it is best to toast the spices lightly in the oven or in a pot.  Once lightly toasted, add the Raki and lower the heat so that the alcohol will warm slowly and not burn off.  Once the Raki is warmed, add the honey and stir until well blended.  The full process will only take a few minutes.  Remove the cloves and cinnamon and serve.

*Organic honey that has a thicker consistency makes for a better Rakomelo.