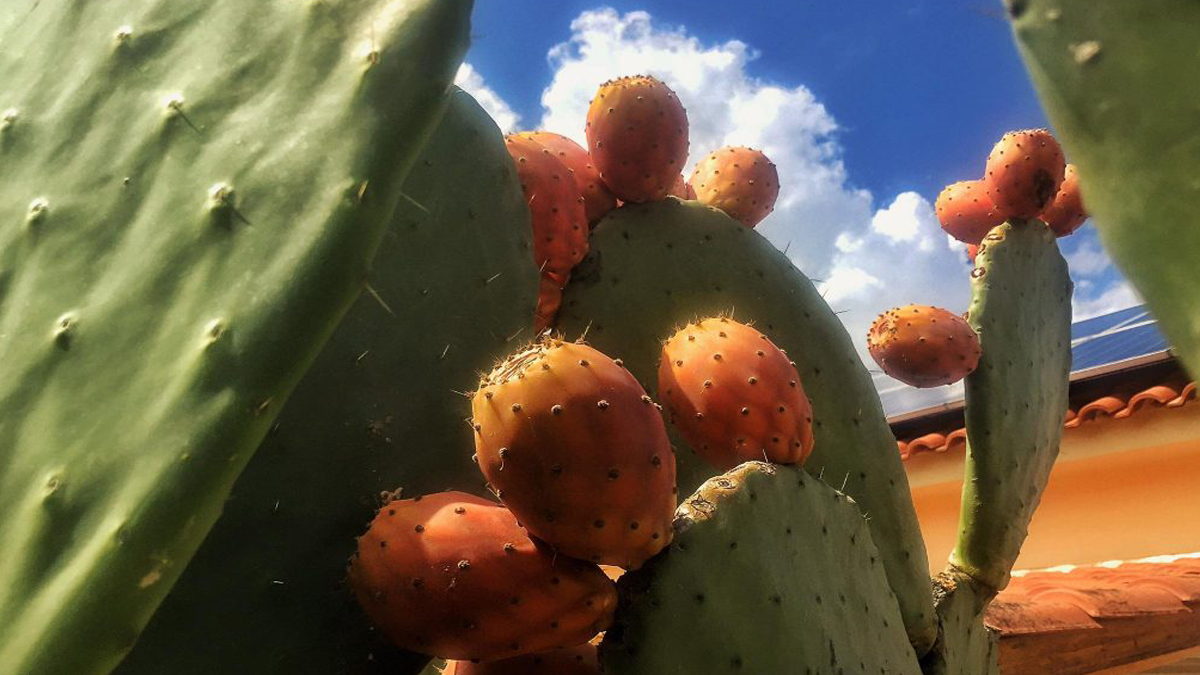 The unique foods of Greece and their health benefits: The Cactus Pear

Since ancient times, the Greeks had realized how precious the gifts of Mother Nature were. The Mediterranean climate along with the geological formations of the country created a fertile ground where an abundance of wild herbs and plants could grow. Cactus Pear, originally from Mexico, found its way to Greece and has become a favorite. Known as Fragosyka, it can be found in the rocky terrains of the country.

Cactus pear or Prickly pear is a culinary species of the Cactaceae family whose fruits and leaves are edible and of high nutritional value. Although it originates in Mexico, its popularity among the Greeks is the reason why it was imported in the U.S. during the late 1900s by Greek immigrants. Even its scientific name bears a Greek element as Opuntia derives from Opus, the ancient Greek city where, according to Theophrastus, an easily propagated plant with edible fruit grew.

Opuntia Ficus Indica is a perennial shrub whose height ranges from 3m (9, 8 ft.) to 5m (16, 4 ft.) Their platyclades are thick, succulent and rounded and form large spines and prickles called glochids. Platyclades produce flowers of yellow and red color which bloom during late May till mid-summer and the fruits are collected from August through October.

Its adaptability to dry and rocky ground is the reason why it is found all over Greece and especially in Crete, the Peloponnese and many islands.

In Greece the common name is Fragosyko and it was first cultivated in Crete and the Aegean Islands by Venetians.

If you find yourself in the Greek countryside chances are there is a Cactus pear tree at a close distance. Don’t let the look of Fragosyko (it’s covered in thorns) deter you from trying this healthy fruit. If you remove the spines and peel the tough skin you will taste a savory sweet fruit packed with nutrients.

In fact, a cup of fresh fruit contains 127 ml of magnesium and 328 ml of potassium, minerals which enhance brain and muscle function and protect against conditions of the heart. Rich in calcium, they help maintain oral health and prevent osteoporosis.

Cactus pears are rich in antioxidants and polyphenols which enhance cognitive activity and are effective against dementia and Alzheimer’s disease.

Its high concentration in niacin, thiamin and fibers helps reduce hyperglycemia and body weight and create a feeling of satiety. Additionally, as a single cactus pear has an 85% of water content, it helps hydrate and treat hangovers, prevent headaches and stomach ulcers.

Prickly pears have a high nutritional value and three edible parts as well; the pear can be consumed as a fruit raw or dried. All you have to do is remove the spines, skin the pear and cut it into slices. Don’t throw away the petals of the flowers as they can be added in salads!

The leaves can also be added raw in salads and they are said to go well with eggs. Moreover, you can score them, add salt and pepper or even experiment with other herbs and grill them. They can be seasoned with lime and a drizzle of olive oil.

In a traditional Mexican dish, the leaves are boiled and cooked in a sauce of tomatillos, garlic and onion.

Cactus pears have various health benefits, however consume them in moderation as overconsumption can lead to constipation. Moreover, remember that in order to remove the spines you need to wear hand protection gloves.

Prickly pear cacti have been a common sight in the Greek landscape as well as worldwide since a long time. However, it wasn’t until recently that chefs and experimenting cooks found interest in the plant. Such an interest has been shown by the scientific community that analyses the short and long-term benefits of its consumption. . In research published in the US National Library of Medicine/ National Institutes of Health it was found that “Consumption of cactus pear fruit positively affects the body’s redox balance, decreases oxidative damage to lipids, and improves antioxidant status in healthy humans.”