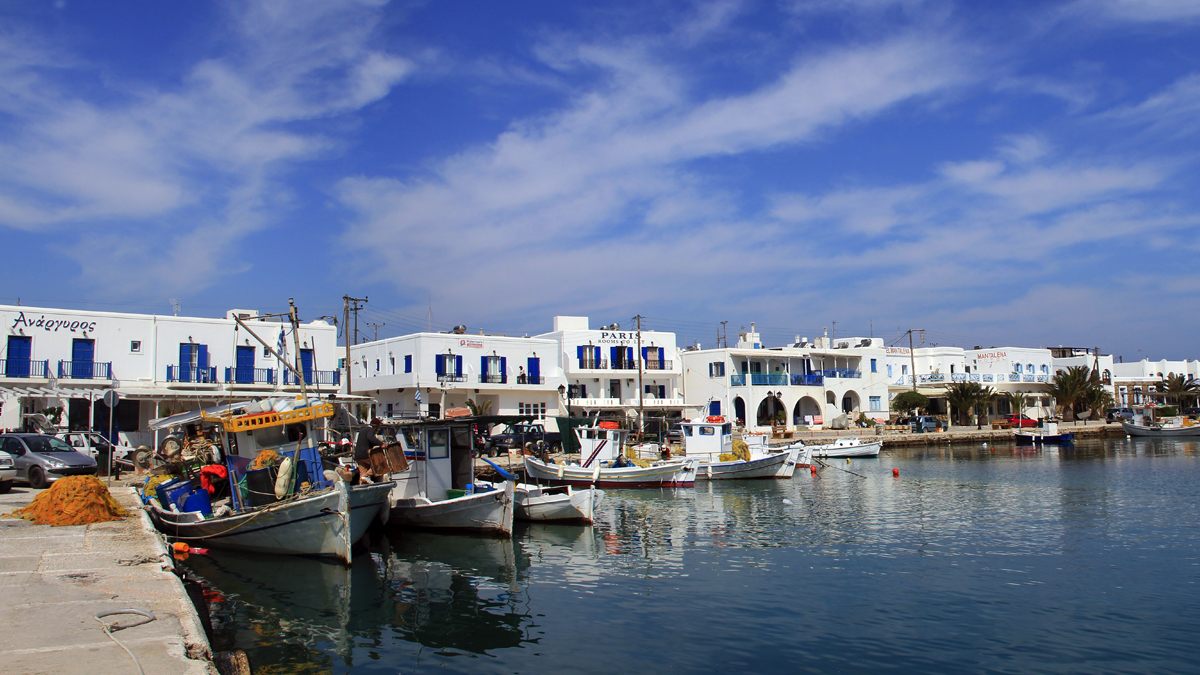 “Antiparos is always a good idea”

Mariliza Dimakou, a former graphic designer and magazine creative director, gave up life in Athens some years ago for Antiparos. She’s currently the owner of two charming gift-shops, and the public relations representative for the municipality. When she agreed to talk to me about the dreamy little paradise that Antiparos is, I did a bit of research online and came across one of her shops. A rather unique item caught my eye—a bracelet in the shape of the island, and a prompt on its packaging: “Antiparos is always a good idea”. I couldn’t help but ask…

The island of Antiparos is located almost a mile southwest of Paros, separated by a strait. The municipality is part of the regional unit of Paros, in the Southern Aegean region at the heart of the Cyclades. It features a flat landscape for the most part, with small hills and peaks, the highest of which—St. Elias—stretches in the middle of the island, at 1010.5 feet. The capital is also called Antiparos. Antiparos basically a volcanic rock with a dry climate and a morphology that favors strong winds. Amidst generally low vegetation, bougainvilleas thrive in the region and adorn gardens, houses, and shops. The island is further surrounded by many small-uninhabited islands, like Saliagos and Despotiko, which are of immense archaeological interest.

Why is Antiparos always a good idea?

According to Mariliza Dimakou, “Because it’s absolute magic! There seems to be a flow of positive energy, a visitor is bound to have a good time. There’s a mesmerizing simplicity, a fairy-tale quality of sorts. The central town alley, for example, lush with bougainvillea flowers and bracts, can hold visitors spellbound at first glance.”

Seized by Venetians and passing from noble house to noble house, from 1207 to 1480, the island bid farewell to Venetian rule in 1537, when Antiparos and the rest of the Cyclades fell to the Ottomans. It remained a part of the Ottoman Empire until the Greek War of Independence in 1821, apart from a period during the Orlov Revolt, in 1770–74, when Russians ruled it. Antiparians were among the first in the Cyclades to take part in the War of Independence and in 1832 the island officially became a part of the Greek state.

Dimakou says, “The island used to be called Oliaros (Ὠλίαρος in ancient Greek), which later changed into Antiparos. During World War II, the islanders actively participated in the resistance movement. The area of Saint George, behind the mountain of Antiparos, facilitated an undercover submarine base. The so called ‘Operation Antiparos’ that took place there, a very distinct period in the island’s history, cost the lives of many Greeks and allies.”

Dimakou highly recommends the mid-15th century Venetian Castle of Antiparos. “It’s as if you’re time-traveling. The traditional houses really transport you to a different era.”

The Castle of Antiparos is a very typical example of the 13th-16th century fortified settlements in the Cyclades. In its original form, the complex featured a motte (a square courtyard), in the middle of which rose a central tower, and 24 two-storey dwellings around the perimeter. They were built in a continuous-block form and their outer facade, lacking balconies and windows, provided the settlement’s fortified defensive wall.

The houses had marble doorframes and could be accessed through the interior courtyard; there was only one exit from the castle, on the southern side, secured by a Gothic gateway that can still be seen nowadays. Twenty-four more residences were built afterwards around this central nucleus, and the new quarter was named “Ksopyrgo” (meaning outside the tower). In later times, churches were added and the central mound was used as a water tank tower.

Nowadays, the homes retain many of their original features, and any intervention requires permission from the archaeological department.

Dimakou believes that Antipararian dishes are the epitome of the Cycladian cuisine. There are family taverns, anywhere you go on the island, where you will most definitely find freshly caught fish and locally-grown produce. You shouldn’t miss trying traditional butter cookies called “kourambiedes” (nope, they’re not just a Christmas cookie in Antiparos!) and the sweet & savoury cheese pies called “melitinia”.

Dimakou shared that Antiparos is a lively place year-round. The chapel in the forecourt area of the Cave of Antiparos, Ai Yiannis Spilliotis, has lent its name to the entire hill it rests upon, and is celebrated in spring. Every July, Ayia Marina—the church that is situated in a prominent position in the port area and welcomes visitors to Antiparos—holds a three-day celebration. The list of events includes concerts, regatta races, a well-known triathlon (swimming/cycling/running) race with participants from all around the world, theatre happenings, a celebration featuring lutes & violins, dance presentations from local dance groups, and much more. The Antiparos International Photo Festival is also held in July.

Several religious festivals, art exhibitions, concerts at the Castle, and other events, will take place in Antiparos in August and throughout the autumn months. The official portal of the municipality is always updated and can be referenced at any time. n

Photos courtesy of Oliaros Dg & Yiannis Triantafillos, for “A for Antiparos”, the official internet portal of the municipality of Antiparos island.