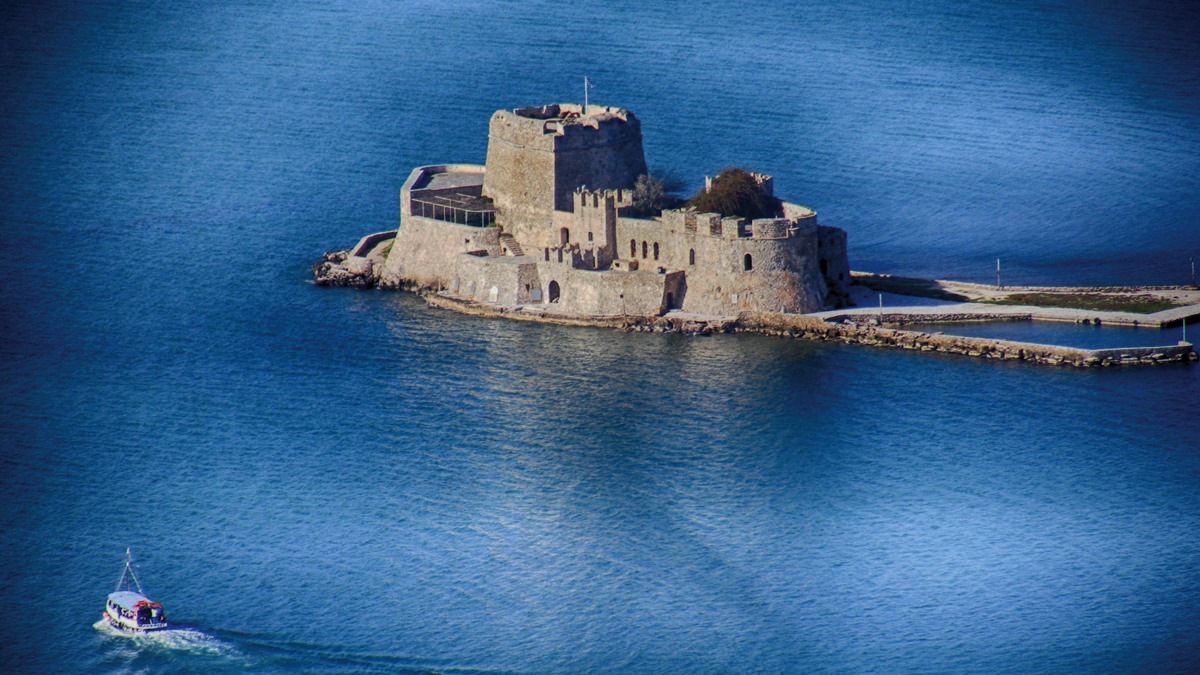 An April Day in Nafplio

If the month of April had to be described in only one word, the word should be change. In the heart of spring, April is the month when the flowers blossom, the days get longer, and our hearts and mood become brighter. Looking back at all the Aprils of my life I realize that a certain pattern is repeated; my delighted heart has always related spring with day trips to beautiful Nafplio. April feeds my need for a change of scenery. Nafplio is my favorite escape; this is the place where I want to begin the joyous spring months!

Less than two hours of driving distance from Athens, Nafplio is an ideal place to visit. According to mythology, the town was founded by Nafplios, the son of Poseidon. Although it is only myth, this town truly seems to be a gift from the gods. Its location, with both views of the mountains and sea, is divine beauty. Moreover, the influence by its Venetian and Ottoman conquerors, in addition to being the first capital of the Modern Greek state, indicates that the town also has a rich history and culture, best represented by its variety of monuments, castles and museums.

Whether a visitor craves a walk on the cobblestone alleys of the Old Town or a tour around the museums, Nafplio has it all. Speaking from a visitor’s perspective, the first thing one should do when arriving in Nafplio is to walk around the narrow streets, exploring the Old Town and the surrounding alleyways. One of the most famous pedestrian alleys is Psaromahalas, a neighborhood in the upper part of the town famous for its breathtaking view to the Argolic Gulf and its bougainvillea trees spreading their branches on the traditionally built houses. Take a moment to admire the lovely view, which is guaranteed to stay in your memory forever; there is no need to take a picture! The souvenir shops and small boutiques are also a point of interest in the Old Town. From handmade jewelry and memorabilia to Greek organic products, such as herbs, spices and honey, this small market is a paradise in which a visitor can indulge. A stroll around the Old Town initiates visitors into the town’s deepest beauties and lets them explore the heart of Nafplio as a local.

After a walk on the picturesque, narrow streets of this beautiful town, one can have a sip of coffee, gain energy and set off for an adventurous ascent to the Palamidi Castle. This castle, famous for its 999 steps (which are actually 857), was built by Venetian conquerors during the years 1711-1714. Because of its Venetian influence, it is of great architectural and historical significance. As Nafplio was one of the first Greek regions to become independent, Palamidi castle was the location where the Nafpliots won their freedom from the Turks in November 29th, 1822. Going up the narrow stone stairs is an electrifying experience filled with pride about our ancestors’ achievements. One of the great Greek ancestors, Theodoros Kolokotronis was actually imprisoned in a small cell inside the castle. After visiting the place where the hero of the Greek Revolution was kept, take a look around and grasp the outstanding beauty of this location. As the castle stands 216m above sea level, the breathtaking view it offers is guaranteed to impress visitors!

Overwhelmed by the town’s historic importance, the next stop after visiting the castle is the War Museum at Amalias’ street. This castle housed the first Military Academy of Greece, founded by Ioannis Kapodistrias in 1828. Within the War Museum’s exhibits are soldier uniforms, weapons, photographs, newspaper extracts and written texts, which help the visitor fully understand the status quo of the region’s war history, which includes the Balkan Wars (1912-1913), WWI, the Greek-Italian War(1940-1941), and the Greek Resistance.

Since the history of Nafplio is rich, the list of the museums to visit is long. A must visit is the Peloponnesian Folklore Museum which offers a collection of more than 45,000 artifacts. While the War Museum offers a deep look into the region’s military history, the Folklore Museum presents insight into the traditional and cultural life of Greeks in the late 19th and early 20th centuries. The Museum has an extraordinary collection of traditional Greek costumes from all over Greece.  The artifacts of the museum, including jewelry, traditional looms, and various furnishings give a glimpse into the life and habits of Greeks in the early days of the Modern state.  A visit to the gift shop is a must, as Ioanna Papantoniou, founder of the museum, is also an expert on traditional Greek costumes and her insightful series of books are available, in Greek and English, for purchase.

Today, Nafplio is widely known as the capital of Kompoloi, or Greek prayer beads! Since Kompoloi production is extensive and craftsmen even export abroad, what else could anyone find in Nafplio but a Kompoloi museum? Founded in 1998, the museum offers a wide collection of beads made of ivory, mastic, pearls, etc., with the oldest bead dating back to 300 years. Even non-Kompoloi enthusiasts can appreciate the owners’ extensive research on the content of this unique museum.

Also unique is the Karonis Distillery Museum, a one-of-a-kind, individual effort to promote the history and tradition of ouzo distillation. The Karonis family has owned the distillery for about 145 years and has a true passion for what they do.  Today, Karonis runs as both a modern distillery and a museum.  Visitors will enjoy seeing how the process has evolved, and yet very much stayed the same, for almost 15 decades.  A fascinating fact is how various spices have been introduced into the liqueur recipes, some indigenous to Greece and some that came into the country as international trade routes opened or expanded. The visit ends with a tasting of the Karonis products.

After a day of visiting museums, there is nothing better than a boat trip to Bourtzi, the fortress built by the Venetians in 1471. Originally a strategic site, the fortress had thick metal chains that ran from its shores to the mainlaind, in essence “connecting” it and thereby preventing attacks from enemy ship. Bourtzi is now a landmark in Nafplio, and many locals agree that the best time to visit it is at sunset. While the fortress is not inhabited, there are many cultural events that take place during the summer months, making the islet full of life!

After a day touring around the town, visitors can relax and enjoy delicious, traditional meals from the Peloponnese at the famous Syntagma square. The square is known for its historic monuments and buildings, one of which is an Ottoman mosque that housed the first Greek parliament. At Syntagma square, the past is intertwined with the present; old buildings surround the square that is comprised of modern cafés, which are popular meeting points for many young people. It is a lively location which offers a variety of activities.

Nafplio offers visitors fun, adventure, beauty, charm, history, and culture. More so, however, it offers an escape from the ordinary and the trivial. When visiting Nafplio, one has the opportunity to travel to the thriving past of the city, with its impressive buildings and museums that shed light on its history, while simultaneously enjoying its contemporary beauty, boutiques, small shops, and cafés. As April embodies change and Nafplio embodies escape, do yourself a favor and visit Nafplio during this time of the year; make a change and escape from the ordinary!