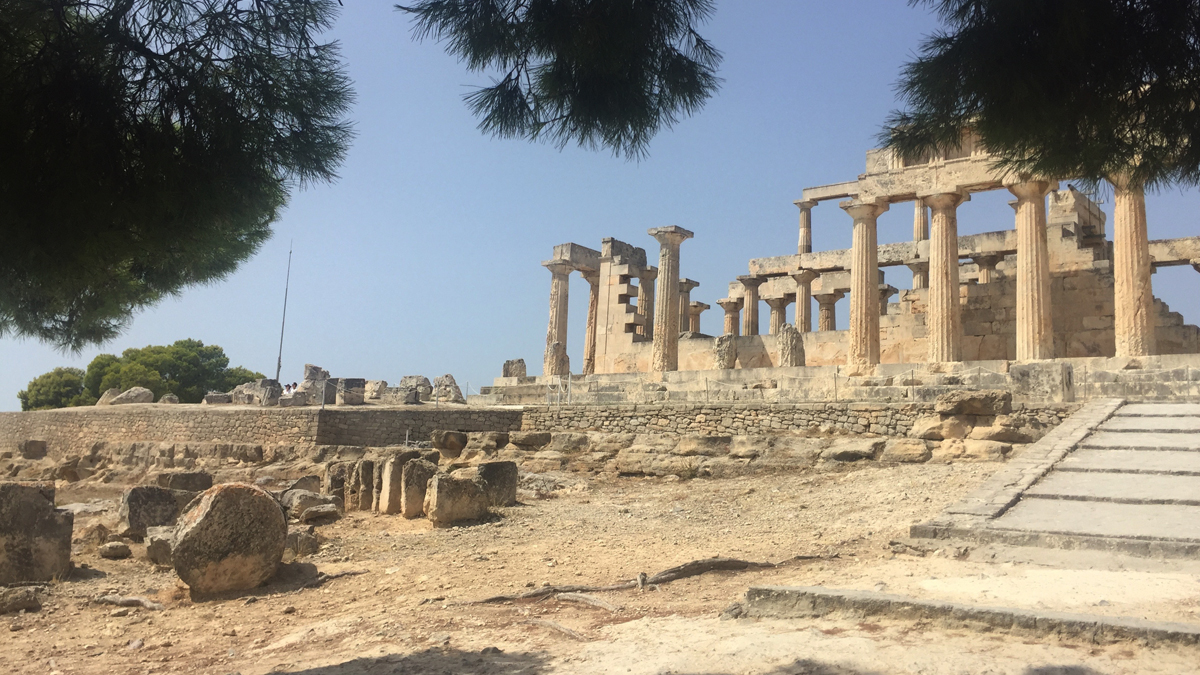 The island of Aegina (the name comes from the mother of the local hero and King Aeacus) was a considerable naval power and trade center during the ancient years, although antagonistic to another great sea power: Athens…

Being in close vicinity of Athens, the history of Aegina island was always connected to that ancient superpower, though not always with a positive impact on the island’s commercial, military and social life. However, Aegina’s prosperity during the archaic and classical years (7th -5th c. BCE) provided generations to come with impressive masterpieces of art and architecture.

The Temple of Aphaia

The most well-preserved sanctuary of Aegina was dedicated to the mother-goddess Aphaia, exclusively worshipped at that elegant temple. The earliest worship here had already started during the Mycenaean period (14th to 11th c.) but the first monumental temple was built in 570 BCE (when Aegina succeeded to be a powerful maritime city-state) and destroyed by fire in 510 BCE.

Τhe temple that stands on the hill today is the newest and last phase of the temple which dates to 500 BCE. The architectural plan represents the “heavy” Doric style and is also well known for its pediment sculptures, which are considered to reflect the shift from the Archaic to Early Classical style.

The temple of Apollo (Kolona)

The small hill beside the modern port of Aegina hosts the oldest settlement of the island. The prehistoric town thrived during the Bronze Age (2600-2500 BCE) until the 12th c. BCE when it was completely abandoned. During the 6th c. BCE, a temple dedicated to Apollo was erected.

Foundations of other shrines have been found to its west, dedicated to Dionysos and Apollo’s sister Artemis. Festivals and competitions were held in honor of Apollo in which men raced one another with clay vases full of water on their shoulders during the month called “Delphinium” (Apollo was also called Delphinius – which means dolphin).

A period of prosperity followed; the hill was transformed into the acropolis of the island. The citizens of Aegina used to resort into the fortress during an emergency condition. From the 3rd c. BCE the island of Aegina gradually started to decline. During the Roman and Christian centuries, the temple sunk into oblivion.

Today, only one column remains from the 6th c. BCE temple; the entire hill is still called Kolona (which means column in Greek), a name which is derived from the Venetian merchants (17th c. AD) who used the columns of the temple to orientate themselves during their trip.

The Archaeological Museum of Aegina

The site of Kolona also features a fairly small, but impressive museum initially established in 1828 by the first Governor of independent Greece, Ioannis Kapodistiras as the National Archaeological Museum. Originally the Museum was a part of the Orphanage building before it has found its own building in 1981. A beautiful collection of artifacts is exhibited here, including over 1,000 colored vases (Archaic, Classical Roman period), 108 lamps, 137 weapons, and 359 coins.

Aegina was one of the most famous sculpture centers of the ancient times; the evolution of the ancient sculpture is lively illustrated through the figures of the pediments of the two archaic temples of Apollo, the two sphinxes (a woman with a body that is a half eagle and half lion) of the sanctuary and some fine reliefs.

One of the most significant artifacts exhibited is the inscription referring to the ancient temple of Aphaia. In the right of the room, fragments of the Aphaia temple pediments are exposed in two showcases. They include marble reliefs, pottery shreds and a few Hellenistic and Roman artifacts.

The 19th century predatory habit has left its traces on the island’s cultural heritage; consequently, a notable number of Aegina’s ancient artifacts and architectural fragments are now on display in German and English museums.