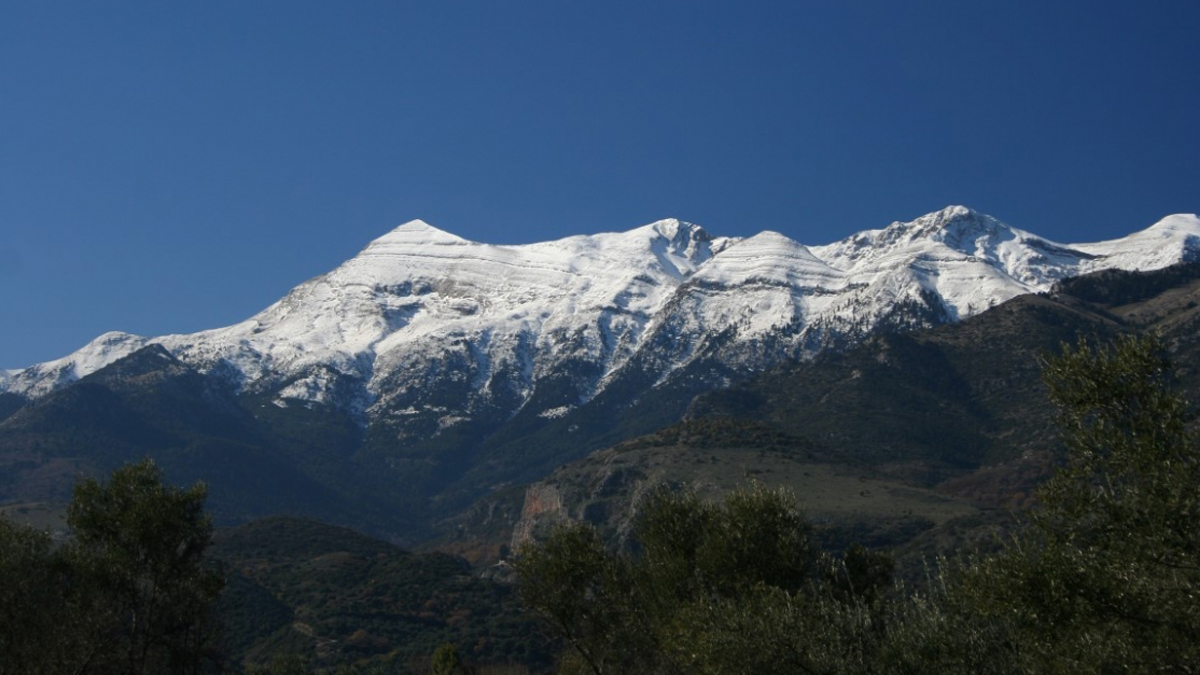 Taygetus: a giant made of stone

The majestic mount of Laconia in southern Peloponnese stands almost 8000 feet tall, surrounded almost permanently by a thick veil made by clouds. For the ancient peoples of Laconia, Taygetus was an intimate yet mythical place; for foreigners, it was always the obstacle between them and the rough Lacedemonians.

Archaeological excavations revealed a continuous human presence from the Bronze Age (circa 3,000 BCE) till the 20th c. Τhe ancient Spartans chiseled their tough way of living around the steep foothills of Taygetus and beside the banks of the river Eurotas. And it was at those very slopes of Taygetus where the last Byzantine dynasty – the Palaiologoi – rise to power commenced. The castle town of Mystras is an amazingly beautiful example of medieval/byzantine architecture. Taygetus is truly a mountain full of whispers from the past…

According to the ancient Greek travelers and geographers, Pausanias and Strabo, the name of the mountain is associated with the unfortunate nymph Taygete, a minor deity, who committed suicide after being raped by Zeus. Taygetus had already been mentioned in Homer’s Odyssey and of course it is detailed in a vast part of the local Spartan mythological circle such as the Dioskouroi Brothers fable and the legendary lives of the Spartan kings before historical times. Nymphs, heroes, gods and eerie creatures left their fingerprints on the cliffs and gorges.

The geomorphology of the landscape together with natural isolation was to have a profound impact on human life antiquity till modern times. It is no accident that the inhabitants of Laconia are stiff and eccentric even today! Taygetus is a natural wall, a rocky fortress that keeps every living being isolated. Τhe ancient Spartans were confident that no one could pass the craggy sierra without paying the price. Indeed, Taygetus is one of the few mountains in Greece with such a rugged geography.

Taygetus has never been praised by the ancient poets as the mountain of the muses and poetic inspiration as it was always the ancient Sparta’s “trademark”; full of war cries, the clang of arms, and stories of bravery and noble deaths. An austere stony mass it is.

However, the literature of the 19th and 20th centuries has already done its duty by the mountain with a long list of poems and texts.

Stratis Myrivilis described Taygetus as a “male mountain” while Kostas Ouranis wrote: “I feel that the Spartans left Taygetus as their monument; being proud of his presence, they raised their soul to the highest peak and became one with him.”

The poet Kostas Pasagiannis treats the mountain as the “womb”, symbolizing a return to his homeland, while for Nikos Kazantzakis, Taygetus was “the harsh voice of the merciless god of the Greek race.” Nikephoros Vrettakos called the mountain “a kind old man” and Vasilis Moskovis “an elusive giant.”

Taygetus is a mountain full of mysteries and contradictions and above all it is a challenge for every determined traveler. There are no tricks up there, just the mere brutal honesty of the rocks.