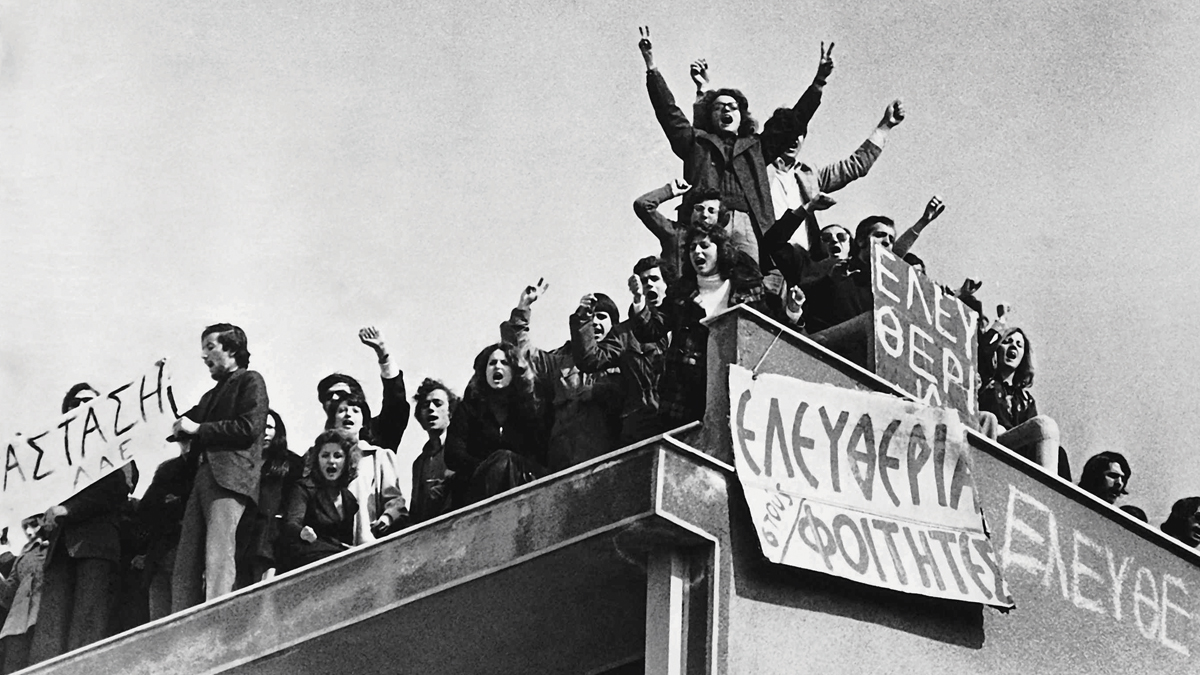 The following article appeared in the “Athens News” in November 2012, the 39th anniversary of the 1973 Polytechnic revolt.

Our gratitude goes to Damian Mac Con Uladh for his permission to reprint his piece in commemoration of those fought for freedom during the events of November 1973.

It’s November 17, 2012, the 39th anniversary of the bloody suppression of the 1973 Polytechnic revolt against the military strongmen that seized power in a coup in 1967.

Thousands of people are expected to march today in memory of that event, but also to reiterate the basic message of the student protesters: bread, education, freedom.

The online archive of this newspaper (The Athens News) provided a wealth of accounts from eyewitnesses of that fateful morning in 1973 when tanks burst through the gates of the Athens Polytechnic. In the hours surrounding the storming of the campus, 24 were killed and 886 people arrested…

15-17 November 1973: University students made history by turning the Athens Polytechnic into a rallying point of popular revolt against the military junta that had seized power six years before.

Using the slogan “Bread, Education, Freedom”, they drew huge crowds around the university campus, including a convoy of farmers on tractors from the town of Megara protesting at the junta’s acquisitioning of their land to build an oil refinery.

In the early hours of November 17 – ironically, International Students’ Day – the police dispersed the protesting crowds around the campus. A short time later, a column of ten army tanks and three armored personnel carriers unloaded 150 paratroopers in front of the main gate of the university on Patission Street. The remaining students standing inside the campus fences started shouting slogans “We are your brethren” for the soldiers to join them in their uprising.

“Listen up! You’ve got ten minutes to clear the university entrance and open the gates, or we’ll do it ourselves,” the commander-in-charge of the army and police forces surrounding the university told the barricaded students over a loudspeaker.

The students started chanting the national anthem in defiance of the officer’s ultimatum. At 2.30am, one of the tanks suddenly roared forward at high speed to smash its way through the university gate, injuring several youths standing behind it. Soldiers and police immediately entered the campus to round up hundreds of fleeing protesters.

Research carried in 2003 by the National Hellenic Research Foundation names 24 people as having been killed in and around the Polytechnic campus on November 16-18.

In 2003, the Athens News asked a number of foreign correspondents who reported from Greece during the junta to recall their experiences.

Nick Michaelian, who worked for Reuters during the dictatorship, describes the period and his encounters with people, including young girls, who were brutally tortured in the most shocking and degrading ways.

“Those days were dark days. Plainclothes policemen from the dreaded ESA (Greek Military Police) arbitrarily arrested and beat up young people on street corners and threw them in cells and tortured them when they thought they belonged to some resistance group. These young people are the real unsung heroes.

Any left-leaning person was anathema…”

For David Glass, who wrote for a number of newspapers during the junta’s rule, all was not what it seemed in the early days of the dictatorship. There was little talk of politics in public and many people seemed believed that if they simply ignored the colonels, they would be asked to stand down at some stage by the international community:

“While people in the street talked about newfound stability and were saying that now that stability had been returned, George Papadopoulos and his junta would return to their barracks, the more I mixed with the journalist community, I realized an undercurrent of tension existed in all aspects of daily life. Politics seemed to be the only topic of conversation, though openly talking about politics was taboo. Much of the discussion was generated by rumors concerning politicians who were not even living in the country.

As well, music composed by people like Mikis Theodorakis and Stavros Xarchakos, who had become my favorites, was only heard behind locked doors.”

And Bob McDonald wrote what it was like to report as a foreign correspondent in Junta Greece. At all times, the safety of one’s sources was a major concern:

“Foreign correspondents worked in relative safety. (The one exception was the British reporter Ann Chapman who was murdered in unexplained circumstances while in Greece on a freelance assignment). The people who ran the real risks were the correspondents’ Greek sources who could be arbitrarily arrested, detained without trial, exiled or brutally tortured if the regime felt they were in any way connected with the resistance.”

In an article written in 2000, former Athens News staff journalist Allan Wilson retraced the hours leading up to the November 17. Wilson, who was on Patission St on that fateful night, wrote:

“Neither I nor any other witness I have ever spoken to, will forget the unwonted sound of tank treads as an armoured column first hove into sight high up on Alexandras Avenue, heading for a Patission Street thronged with Athenians in a high pitch of excitement but expecting riot police, not tanks. The sight was greeted with a mixture of amazement, fear and sheer disbelief.

The tumult was deafening, as the scream of steel tank treads scraping asphalt and torturing concrete kerbs competed with the sound of people shouting and the sound of shooting as pockets of snipers took aim at the armour from the terraces of buildings adjacent to the route taken by the tanks – Mavromateon Street below Pedion tou Areos park, then Scholi Evelpidon Street, then a by-now fast-emptying Patission Street as the column headed for the Polytechnic.”

Another eyewitness was the Dutch journalist Albert Coerant. In a piece penned in 2001, he recalled the many unremembered heroes of the junta period:

“Indelible images from the past cross my mind on key dates of the year, like the tanks moving into the Polytechnic on November 17, 1973, and April 21, 1967 when the military first took over. Especially images of anonymous people – not the celebrities protected by their international fame, but the unknown and vulnerable who risked so much more by opposing the junta.”

He also recalled the Athens News’ founder and his stance during the dictatorship. “One paper had a huge headline, ‘We should all fight for freedom…’ Underneath, in very small letters, was added ‘said Willy Brandt’, referring to events in then-divided Germany.”

In another article, Coerant, who worked as a correspondent for Dutch and Belgian TV in Greece during the military dictatorship, recalls the hours as the tanks rolled in:

“And then the most horrendous and surrealistic scene of all; one which will never leave my mind. The tanks – more than 25-arrived; as if they had to annihilate a well fortified fortress and not a university campus full of unarmed children yelling for freedom. They came rolling in at about midnight. One enormous grey monster stood just in front of the gate of the Polytechnic. From the open turret an officer appeared with a pistol in his hand.

The students begged the army not to use force and not to harm them. The officer shouted down from his tank that the Greek armed forces would not negotiate with anarchists. In the Acropole Palace, children were crying and many were kneeling and loudly praying to God to stop the madness. One of the most incredible and shameful things was that at this very instant, as the children of Greece were about to die for freedom, in the same hotel, at a short distance from the oncoming catastrophe, a room full of two hundred people, mostly women but also some men, were playing cards, totally impervious to the clamours and weeping of the youth of their country.”

He also relates the repeated visits in the years following November 17 from a Greek man who seemed very inquisitive about the night’s events. Coerant would later learn that the man, who had told him that he had a son studying at university, was in denial: his son Diomedes Komnenos had been killed by a police bullet, fired at point-blank range at the gate of the Polytechnic on November 17.

Ylva Wigh of the Swedish daily Dagens Nyheter was another eyewitness. As she recalled in 2003, what she saw in the early hours of November 17 was so shocking that she was unable to speak about it for years.

“Around 2 o’clock on that same night when the tank had broken into the Polytechnio and the last edition of my newspaper had gone to print, Dinos [Mitsis, former news editor at the Athens News] and I went down to the scene. From taxis, cars and open windows, we could still hear the cries for help from the radio station that the students had built inside the Polytechnio – a radio station that had a broadcasting radius of around five kilometres. For days now, it had seemed that everyone in Athens listened to that brave little channel – not even the most brutal of policemen had the chance to stop that.

Well, at that late hour, the streets were full of policemen, and we heard shots. Somewhere behind the Polytechnio, we rounded a corner and, from the horde of policemen, came a bullet passing one or two centimetres from our faces.

After that, my memories are like a surrealistic dream. We were shocked and didn’t even mention our near-to-death experience. We went home to Kolonaki and sat, dazed, with the radio between us until around five o’clock in the morning when the last gasp was heard and the station was silenced.

So many things happened afterwards, and for a long time, Dinos went into hiding, chased by dictator Ioannides’ police, probably for having helped to spread the news to Scandinavia.

I think it wasn’t until a year after that that we talked about our near-death experience.”

November 17 was the decisive event in the countdown to the collapse of the seven-year dictatorship a few months later. Journalist Mario Modiano of the Times recalled the night the junta collapsed, which was marked by the return of Constantine Karamanlis from self-imposed exile in Paris:

“It was a night unlike any other night. The spectacle was magnificent and heart-warming. Above all, this was a rare occasion for a journalist to watch happy history in the making.

Constantine Karamanlis, the former prime minister, was coming home after 11 years of self-imposed exile in Paris. He had been invited to return and restore democracy in Greece.

It was one of those rare moments when all the Greeks agreed that he was the only man who could pull the country back from the brink of war, just as a seven-year-long military dictatorship was collapsing under the onus of its own blunders.

As I rushed to the airport by taxi before midnight, I could see hundreds of thousands of jubilant Athenians lining the road to Hellenikon to welcome their own Cincinnatus. Most of them held lit tapers as on Resurrection night.

It was a rewarding sight for a foreign correspondent who had watched with great revulsion and hurt Greece suffering the indignity of being railroaded for seven years by a band of uncultured and inept army officers.”