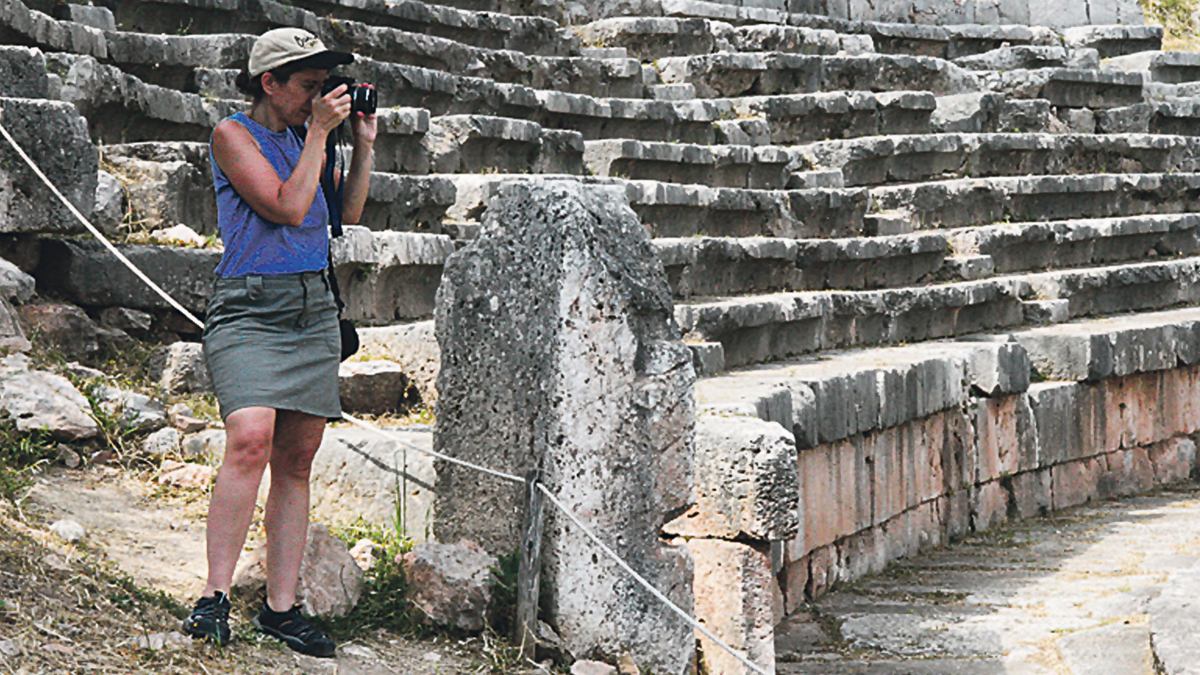 Artist and teacher… Andrea Eis is a Professor and Director of Cinema Studies at Oakland University in Rochester, Michigan. Her art is a creative blend of her academic influences (classics, anthropology and photography/film/video), bringing together film, photography and even fabric.

Her recent exhibit, Marginalia, will be exhibited online with Politismos this winter. We had an opportunity to speak with the artist and learn how she is giving “visual voice” to the beauty of the words that captivate her…

In addition to your work as an artist and professor of cinema studies, you also have degrees in classics and anthropology. What was it that drew you to classics?

I had been fascinated with learning about the past since grade school, even going to years of “Young Archaeologist Lectures” at the Metropolitan Museum of Art in NY. When I started my undergraduate studies at Beloit College, I knew nothing about classics as an academic field. In a chance encounter during registration for my first semester, a classics student handed me a flyer on learning ancient Greek, and I decided to give it a try. From there, it was my excellent professors who really drew me in – they were passionate about the value and resonance of Greek language, literature, and culture, and passed that along to their students. They taught me about the intellectual depth and poetic expressiveness in Greek thought and language. I discovered a love of translation – in its own way an archeological dig into the past – with its puzzle of interpretation, how it created a dialog with people who had lived thousands of years ago. With my art, I hope to continue that dialog, in another form of translating the past.

Your recent exhibit “Andrea Eis: Marginalia” was on exhibit at the Sweet Briar’s Babcock Gallery and will be featured on Politismos. It features your photographs as well as the handwritings of Meta Glass you’d found in some textbooks. How did the concept for the actual exhibit come about?

In the winter of 2008, I spent my 4-month sabbatical in Greece. I wanted to immerse myself in contemporary Athens, to feel what if felt like to live in the city not see it only as a tourist, to explore contemporary Greek art, and to retrace (and rethink) experiences from my year spent in Greece during undergraduate school. In another chance encounter, I happened upon a set of ancient Greek texts that had been owned by an American woman, Meta Glass, while she was studying for her Ph.D. in Greek and Latin at Columbia University in the early 1900s. She had written English words in the margins as she worked on translating the Greek, and as I started photographing them, I found a parallel between her verbal expressiveness and the visual poetics of Greek sculptures, and starting combining them in layered images.

Meanwhile, I contacted librarians at Sweet Briar College, where Meta Briar had been president from 1925 to 1946. I wanted to know why her books were in an library in Greece, but we never figured that out. I did, however, decide to visit Sweet Briar, to see their archives on Meta Glass. I felt very connected to her, with my classics background, and my life as an educator. Plus I had spent innumerable hours “in dialog” with her through her writing, getting to know her. It was during the visit to Sweet Briar that the curator offered me an exhibition. It felt perfect to bring Meta Glass’s words back to Sweet Briar, a place where she had been so important to the education of women, and a voice for the relevance of the classics in contemporary experience.

If you had the chance to sit and talk for an afternoon with any poet, author or artist (living or deceased) you have featured in your pieces, who would it be? And what would your first question be?

Can’t I talk with them all??? Perhaps one of the Greek lyric poets would be most interesting. The lyric poets created imagery with precisely vivid details (even photographic or filmic in quality) that are, simultaneously, expansively expressive, opening up into emotional content. I would ask – perhaps Ibycus? – about his process of poetic transformation, about using details of the lived-in world to express the tangles of the internal, emotional world. It is something I hope to achieve in my artwork.

Your work is a refreshing blending of classic and contemporary image and word. Was it an intentional goal, or did it seem to just fall into place like this as you saw and read various works?

When I decided to shift from classics to art, I struggled with what exactly I wanted to express with my artwork. When I turned back to the classics for my content and visual base, it was like coming home. On the purely visual level, I love immersing myself in the style of the Greek alphabet, with the velvety curlicues of its beautiful letter forms, and the expressive power of the Greek sculptures. In a deeper sense, though, I believe strongly in the relevance and resonance of the human experiences – good and bad – in ancient Greek stories and myths. Yet many of the lessons from that time are still unlearned. Through my art, I want to make the expressiveness and depth of Greek knowledge, as well as the lack of comprehension and tragic errors, accessible in a contemporary form. I wanted to give a visual voice to the silent conversations I was having with the past. Digital processes allow me to fuse the images and words of multiple “pasts” (the ancient Greeks writers and artists, the marginalia writers) with my own present reality, and with that of the viewers of my art.

As a professor of cinema studies, what is an important piece of advice you share with your students as they embark on their professional journeys?

I talk to students about finding what they really care about, so that their profession can (at least at times!) be a source of joy as well as a career. They will do their best work, and be most productive and fulfilled, if they can work in a profession that means something to them – even if it is not the first career they embark upon.

Do you have any new projects you’re working on? Upcoming exhibits or lectures?

I am working on several new projects (while I also continue my Marginalia and Palpable Knowledge series). I photographed a book printed in 1611, of George Chapman translation of Homer’s Iliad, for a series connected to John Keats’s poem, “On First Looking into Chapman’s Homer.” I am also working on several new short films, exploring the stories of Helen, Antigone, and Oedipus. After having multiple exhibitions, film screenings, and lectures in the fall of 2016, I am in a break from exhibiting, while I concentrate on making new work.

Learn more about the art of Andrea Eis:

To purchase Andrea’s books, send an email to: eis@oakland.edu